We mentioned a month or two ago a long-term project we have going with the Wylie House on campus. Roughly 5000 letters of correspondence are being cleaned, repaired and rehoused for eventual storage at ALF– the compact off-site storage facility our library system has on campus. Surface cleaning and mending the letters has been relatively trouble free, but early on we realized that the stage of humidification (prior to pressing) was causing a workflow log jam. The first efforts involved utilizing the dome on our cold suction table. An ultrasonic humidifier feeds humidified air into the chamber and after a couple of hours, the letters are damp and ready for pressing. 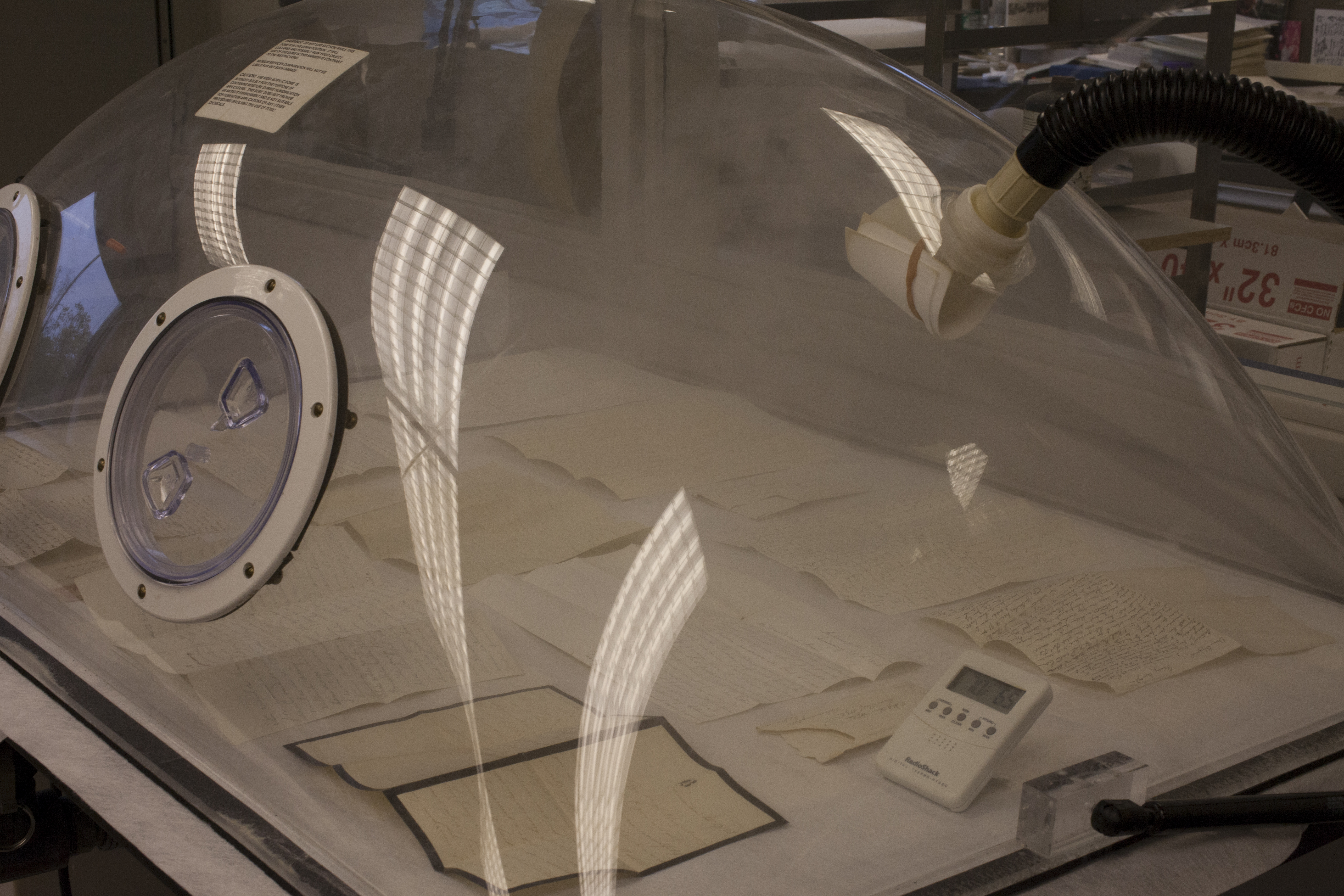 We could only humidify about twelve to fifteen leaves at a go with this method, so we added on another humidification technique by turning our large sink into a chamber, supplied with wet blotters beneath a layer of Gore-Tex. Another dozen or so letters could be prepped this way each day. 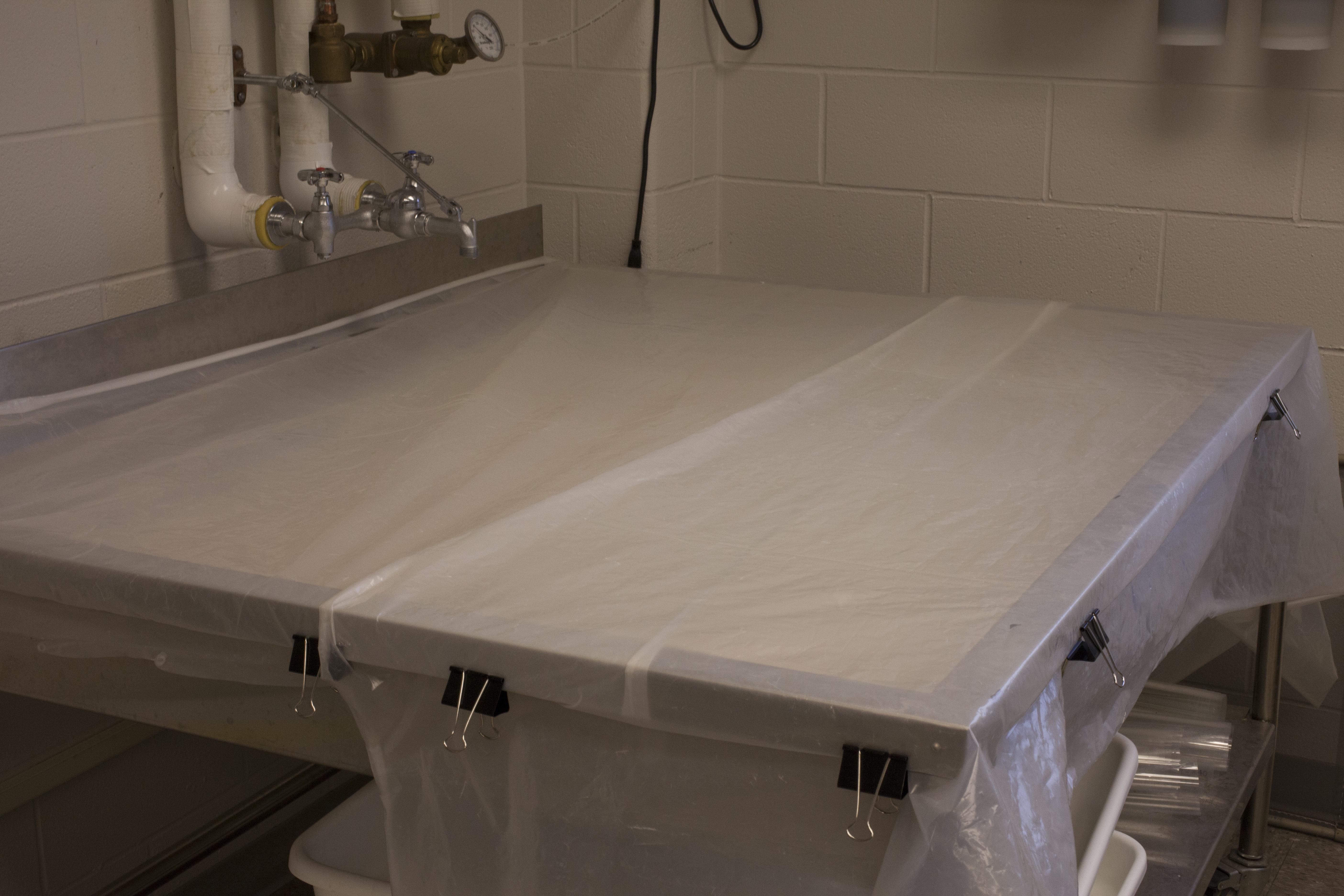 Even with these two options, pressing efforts were being stalled, causing us to go back to our client library with a much longer than originally projected completion date. Thankfully, inspiration struck and it occurred to us that it may be possible to convert our print drying rack into a Mass Humidification Device. 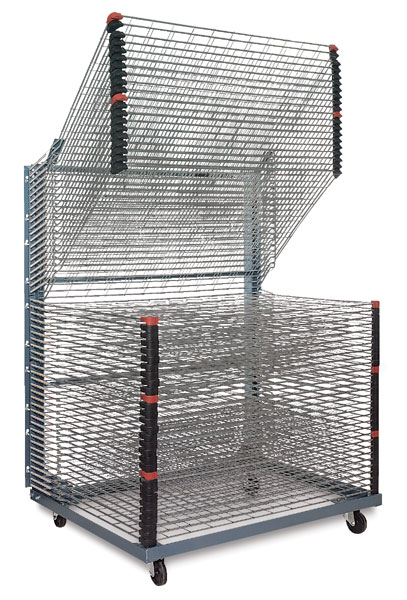 We constructed a slip cover of sorts out of plastic sheeting and Velcro tape that fully encloses the rack, except for the bottom. With a generous ‘dust ruffle’ of sheeting at the base, not much water vapor seems to leak out. The cover is constructed of two parts: the larger is a single sheet, with stapled ‘seams’ giving some rigidity to five ‘panels’ to wrap around the rack, with closure in the front; the second piece is a top that Velcro bonds to this upright portion. 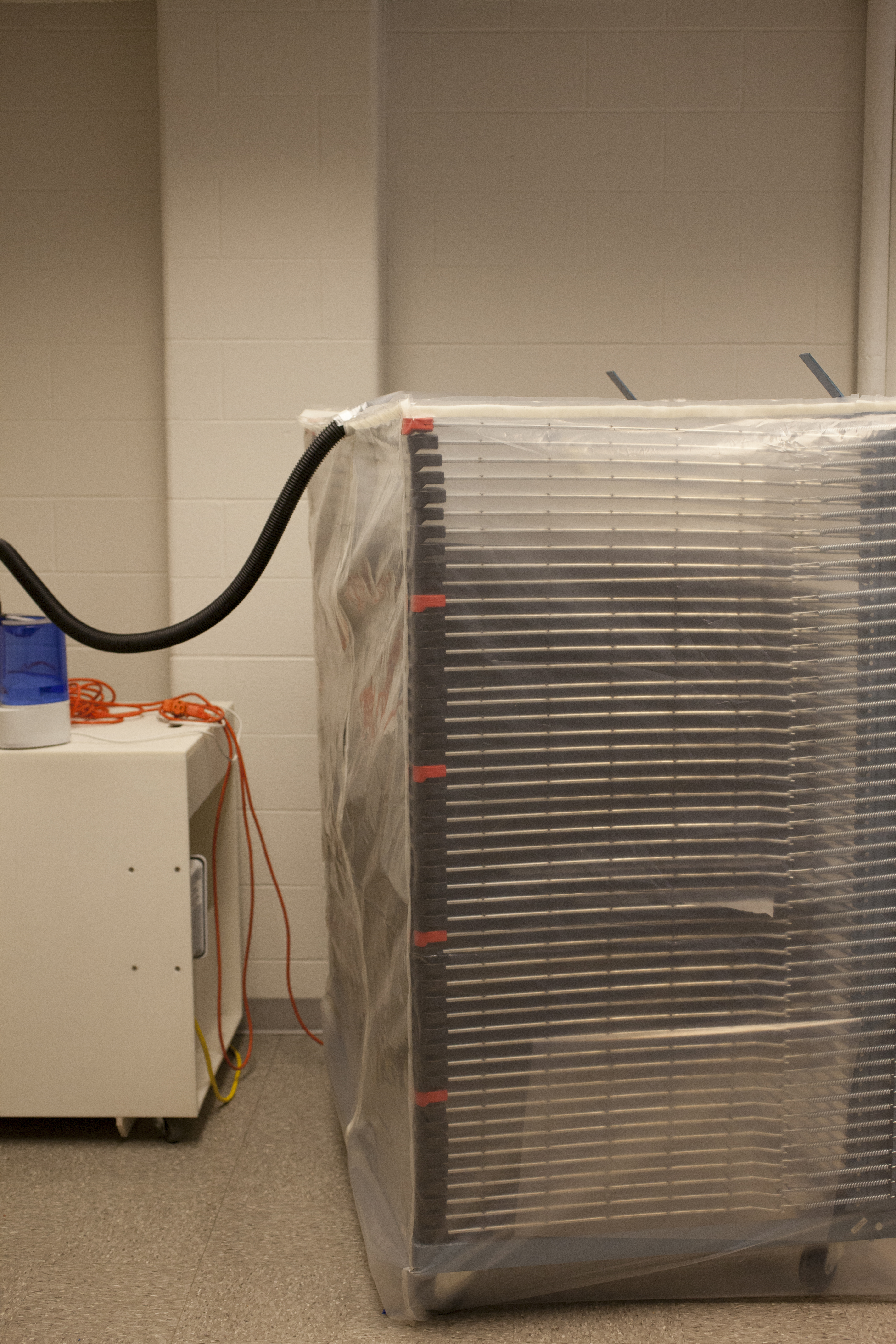 The above photo shows initial tests introducing humidity into the chamber by way of the ultrasonic option. After several hours, the %RH was only up to ~70%. Opening up the cover revealed that the humid air wasn’t dissipating into the overall volume fast enough, before condensation occurred at the point of introduction. In other words, we had liquid water and dripping where the hose made contact with one of the shelves, but dryness elsewhere. A second set of tests with wet blotters proved much more effective with speed of humidification and distribution of water vapor.

We are now able to fill 20-25 shelves with correspondence per day. A wet blotter is placed between every 4-5 shelves of letters. Humidification takes place over about six hours. We empty the rack of its contents at the end of the day, and create a press stack for overnight drying and flattening.  The process is repeated the next day, ensuring that items are pressed for 24 hours, which is effective enough for single-leaved, stationery-weight paper.  Foldering and boxing then occurs. 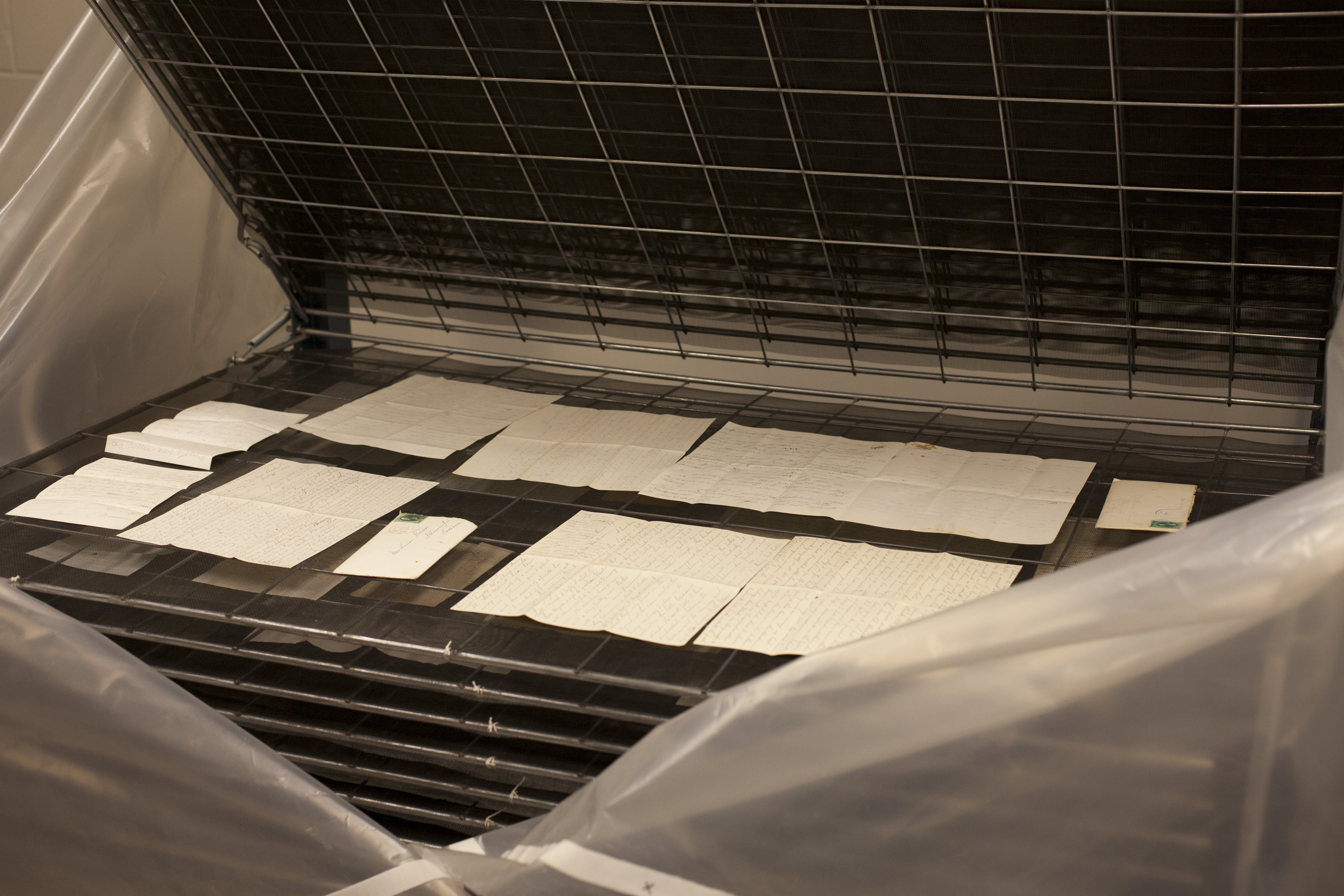 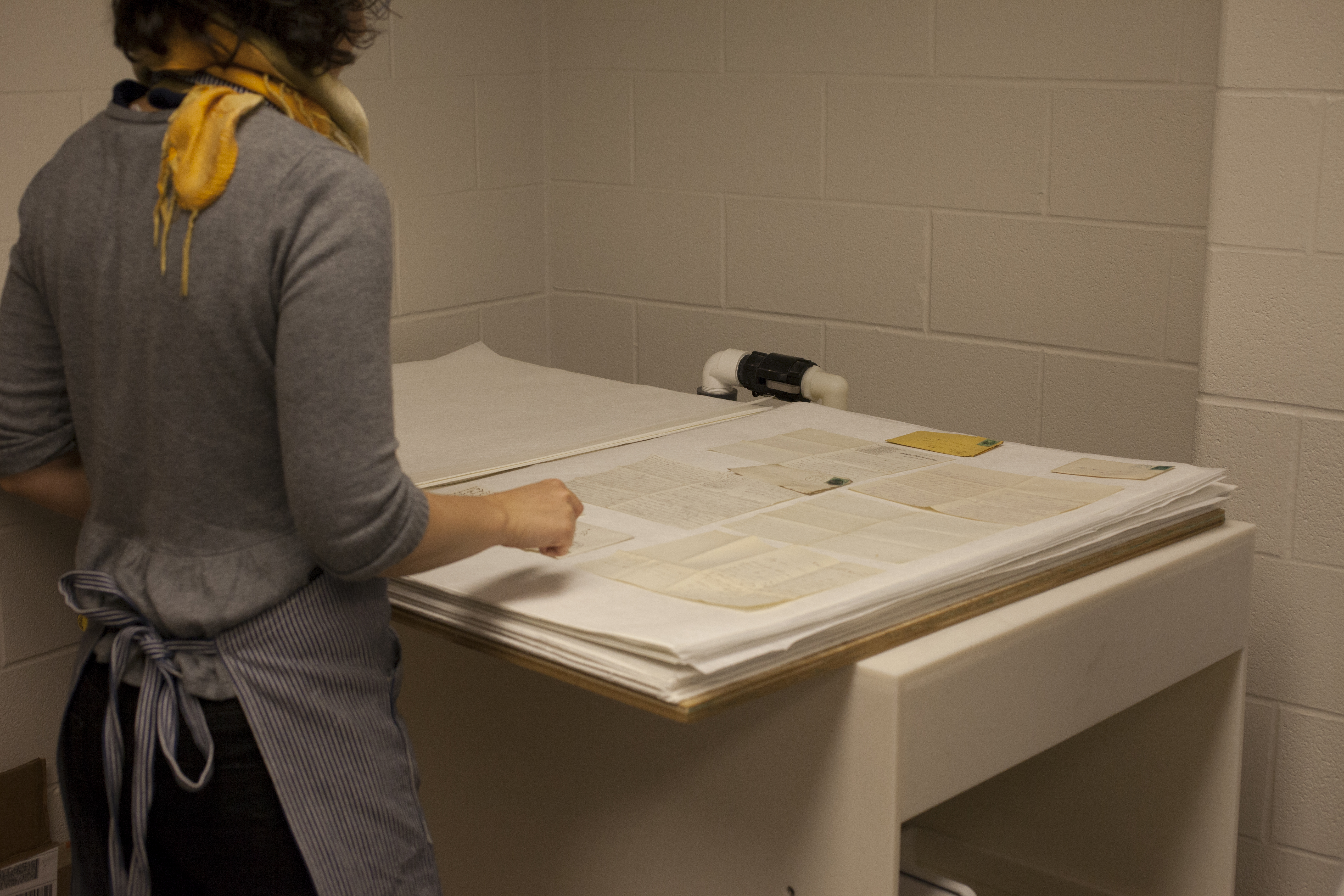