Our Music Library recently sent me a nice book covered in vellum over stiff boards, titled Vergel de Musica. It was written in the 16th century by Martin de Tapia, but this edition was published in 1954, and was in the circulating collection.

Martin de Tapia (fl. 1559-1570) was a highly respected music theorist – that is, until it was discovered, in recent times, that his Vergel de Musica was plagiarized in its entirety from another author’s work!*

The problem at hand, though, was that the covers were really warped. 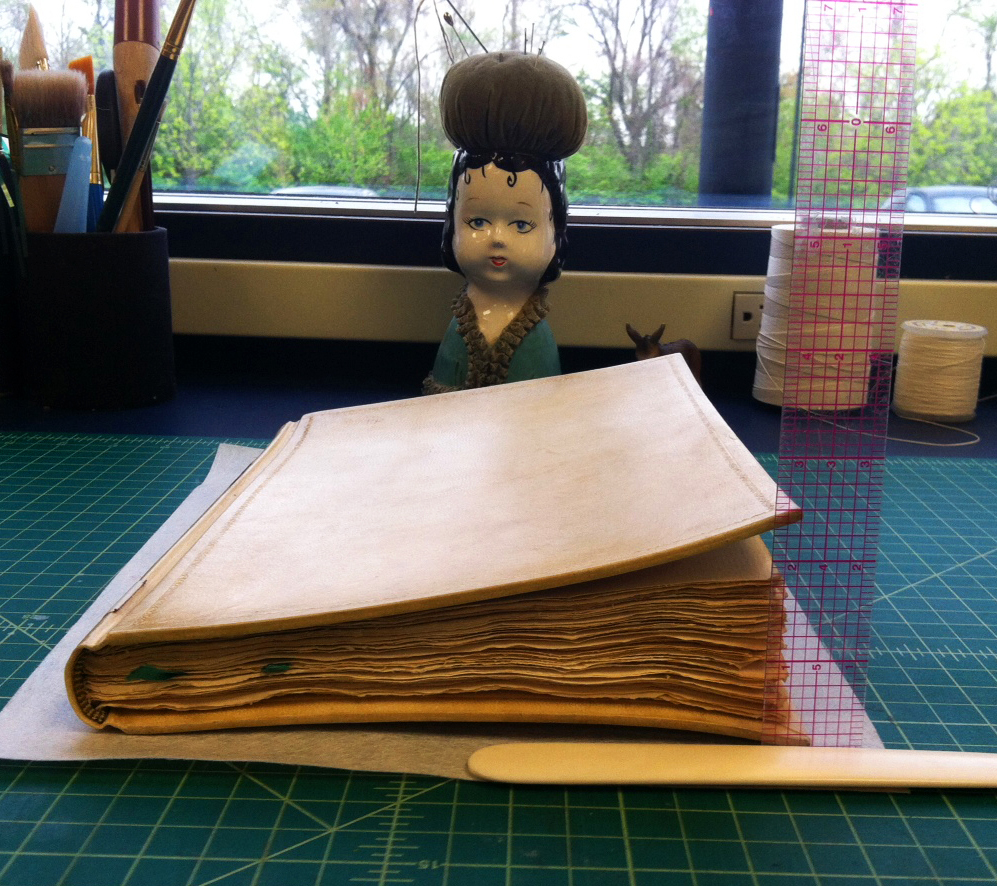 Stiff-board vellum binding, before treatment. The depth at the outer edges was 2 ½ inches.

Vellum reacts to changes in environmental conditions. It may shrink in a dry environment, such as occurs in the winter in heated buildings, i.e. the open stacks of your typical library. The pull of the vellum is very strong and can warp the boards. The counteracting pull exerted by the adhered endpapers is not enough to counteract that of the vellum. Both the vellum and boards need to be relaxed to be flattened.

I had a little experience with parchment/vellum, but only with humidifying and flattening rolled documents like diplomas and certificates. I knew that a stiff-board vellum binding was more complicated. Too much moisture can cause the vellum to become distorted and/or transparent whether its a document or on a bound volume. In addition, too much weight/pressure on a bound volume can crack the vellum in the joint, or split the endpaper at the inner hinge.

After doing some reading, and asking advice from wise colleagues, I had a plan. Several techniques have been used successfully, including:

A thread of messages on the Book Arts Listserve dated June 13-15, 2012 with the subject line “Warped boards,” contains descriptions of several of these techniques. 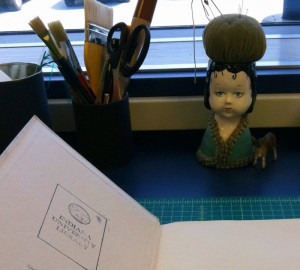 Other than that, the book was in very good condition. So I decided to use the Gore-Tex pack. Gore-Tex is a waterproof, breathable membrane, which is useful for introducing humidity gently without the object coming in direct contact with water. Gore-Tex is used to make raincoats that keep you dry without getting sweaty, waterproof running shoes and boots, and the like.

Here is what I did.

⇒ First I wrapped the text block completely in a sheet of thin (2 mil.) Mylar to protect it from the moisture that would be introduced.

⇒ I inserted Reemay (sheets of non woven polyester) inside the covers against the pastedowns, then damp blotters, closed the book, and put a light weight on top. I put the book inside a plastic tub with a locking lid for 15 minutes. After checking the progress, I put it back for another 15.

⇒ The boards started to feel a little bit pliable, so I re-dampened the inner blotters and put them back. Then I started introducing humidity on the outside. I wrapped a sheet of Gore-Tex over the outside of the cover to protect the vellum, damp blotters against the Gore-Tex on the front and back of the book, and wrapped a sheet of thin Mylar around everything. I put a thick acrylic sheet on top of the book with a light weight on top, inside the tub, and checked progress a few times over a 30-minute period.

⇒ Next I replaced the damp blotters inside the covers with “pyramids” of damp blotters, little stacks of rectangles graduating in size, with the smallest centered and closest to the pastedowns. The pyramids put more pressure in the center of the board so that it is pressed upward while the outer edges are pressed downward. I put the whole package back under the acrylic sheet, this time with a medium weight, inside the tub for 30 minutes.

⇒ Wow, it was already pretty flat! I switched the damp blotter pyramids inside for dry pyramids but left the outer Gore-Tex, blotters, and Mylar for another 30 minutes.

⇒ Last, I removed everything and placed dry blotters on the insides and outsides of the covers. I put the book under a board with a fairly heavy weight and left it overnight. 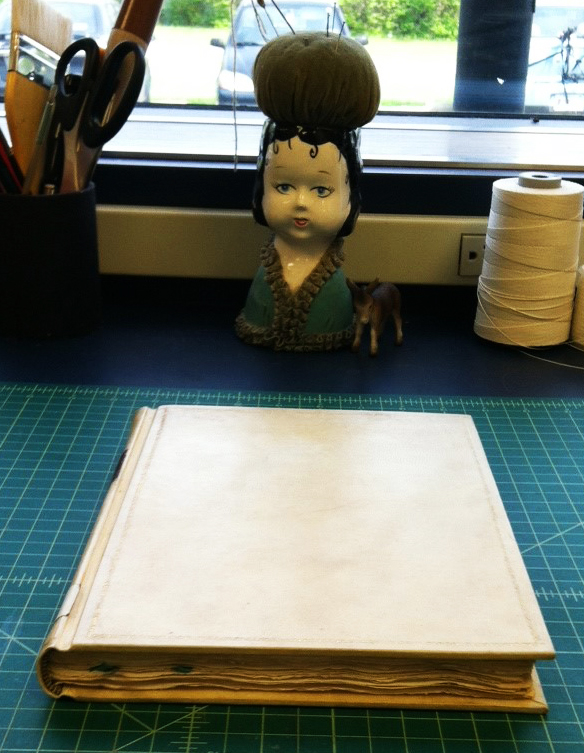 And that is how I lost 1 ½ inches in just two hours.

Before and after treatment

I made a phase box for it as a restraining enclosure and recommended that the Music Library transfer the book to their special collections vault where the temperature and RH are much better controlled than the open stacks.

Thanks to my wise and generous colleagues, Priscilla Anderson and Liz Dube, for sharing their knowledge and experience on vellum-covered books, and Susan Rogers, who taught and guided me through the process of using a Gore-Tex pack to humidify parchment documents.

*Tapia [Numantino], Martín de, (fl 1559–70). Spanish theorist. He came from the province of Soria, in which the ancient Iberian city of Numantia was located. He is thought to have been a ‘bachiller’ of Salamanca University and a musician in the Cathedral of Burgo de Osma. Tapia’s treatise, Vergel de música spiritual, speculativa y activa, del qual muchas, diversas y suaves flores se pueden coger (Burgo de Osma, 1570; ed. J. Subirá, Madrid, 1954), was completed in 1559, 11 years before publication. It was held in high regard both by later Spanish theorists and by recent music historians, earning him a reputation for erudition and originality. The respect was misplaced, as has been shown by Stevenson and León Tello, who discovered independently that Tapia plagiarized in its entirety, including even the dedication and prologue, Bermudo’s Libro primero de la declaración de instrumentos (1549). The trifling alterations made by Tapia, chiefly consisting of added sentences at the beginnings and ends of chapters, were designed to conceal the deception.