The E. Lingle Craig Preservation Lab routinely produces a large number of enclosures for both bound and unbound materials within our campus research collections. Enclosures range from simple pamphlet binders and folders to more complex phase boxes, tuxedo wrappers and special collection clamshell or drop-spine boxes. Construction can occur manually, semi-automatedly, or a combination of the two.

Generally, manually-made enclosures are constructed for special collections books and manuscripts as well as personal effects that often accompany our paper-based collections (medals, watches, tobacco pipes, trophies for example). Build-ups, wells and sink mats are relied upon to hold such materials.

The Kasemake is a semi-automated system developed by Conservation By Design, relying on an operator inputting length, width and height measurements into a CAD-based system with output to a machine that can cut, score and label form-fitting boxes; the designs for which come from a wide catalog of template options. Kasemake machines are being utilized in many libraries and archives throughout the world. Our Kasemake KM503A purchased in 2001 was the first in North America; fiscal year 2013/2014 saw 5000 enclosures constructed with this piece of equipment. It is worth noting that other box-making systems are also in place within many large libraries.

There are several limitations to the current approach which from time to time call on more innovative solutions. Enclosures made by both systems generally rely on wrapping simple shapes with right angles and slab-like forms. These methods cannot always follow three dimensional contours accurately and rely on stabilizing the irregular object at a limited number of contact points through collars, struts, slots and posts. Form-fitting wells of foam are the preferred choice, but very difficult to make accurately by hand. 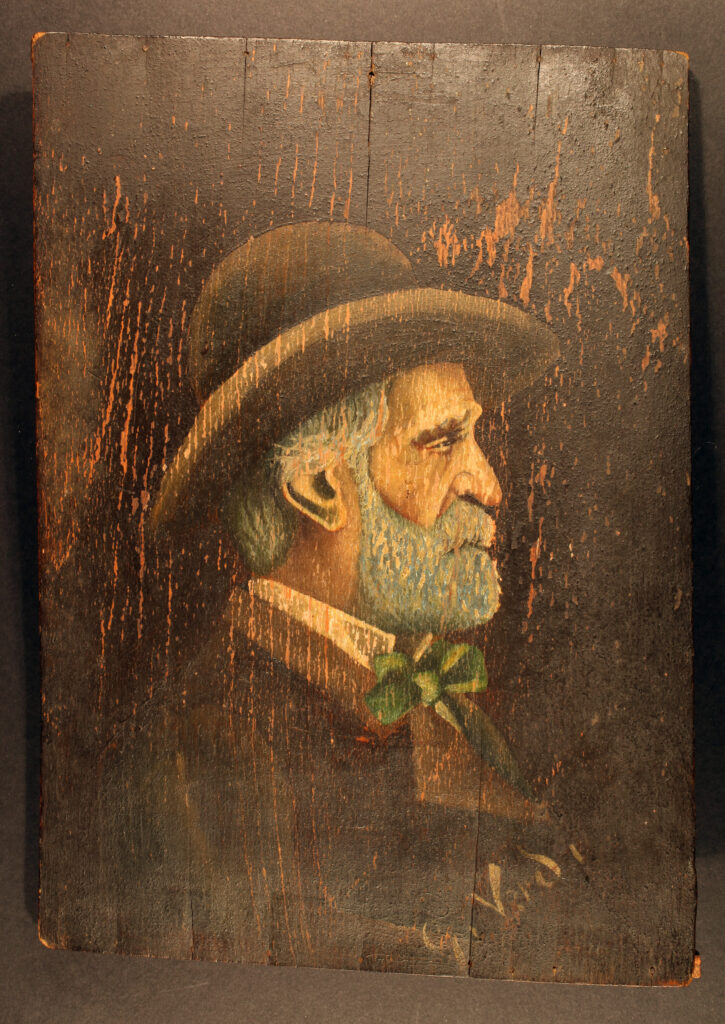 In Spring 2015, the Preservation Lab received a painting on wooden panel from the Lilly Library. The panel is a single piece of wood measuring 35.5cm x 25.0cm x .5 cm thick. 1.0 cm battens run the full width along the top and bottom of the verso. Warping of the panel has occurred, resulting in a subtle saddle shape. Internal stresses also produced several longitudinal splits through the board. The painted surface suffers from active cleavage and loss.

The curator overseeing the project wished for the panel to receive an enclosure that would protect the item from handling, offer support in storage and be straightforward enough that staff could remove the item for access and return it without much manipulation of the panel, or its enclosure.

Typically, we would pad out a box with rolls or blocks of archival-quality foam to support selected areas.  In this particular case, conservation staff felt that localized support would not be enough, as the panel rested level on only two points of contact. There was vibration concern for the paint layer as well as a restriction that nothing could be placed directly on top. We also wanted to come up with a solution that would allow for subtle changes to the panel dimensions through environmental fluctuation.

After some discussion, it was envisioned that a form-fitting cradle, following the complete contour of the verso surface would meet our needs. 3D scanning and computer modeling was thought to be the best route to the construction of the form. A literature search revealed little published work applying 3D scanning technology to museum and library storage. Our scanning and fabrication options were initially thought to be either a rapid prototyping machine (ie. 3D printer) or a router-based CNC (Computer Numerical Control) system that would carve the void out of a block of foam. Neither was a good solution from a conservation perspective nor necessarily available to us. We realized that our Kasemake box fabrication machine could potentially be used to create a form, in an additive manner based on the build-up of layers of foam.

Conservation staff sought scanning and modeling expertise across campus departments at Indiana University, Bloomington. It was found that the Center for Biological Research Collections had recently purchased a scanner to begin a project of digitizing its vast consortial collection of biological and paleontological reference materials. Gary Motz, CBRC Project Coordinator generously offered to use his equipment for our purposes. Further help came from Jeff Rogers, Principal Project Analyst at the IU Advanced Visualization Lab who would digitally model the enclosure volume. With luck, we hoped that the team could generate files that could be exported to our Kasemake machine for fabrication.

The initial scan was generated with a FARO Edge ScanArm ES. This is a hand-held laser scanner and non-contact measurement system. The panel was gently inverted on the work surface of the scanner, to reveal the contour of the underside. 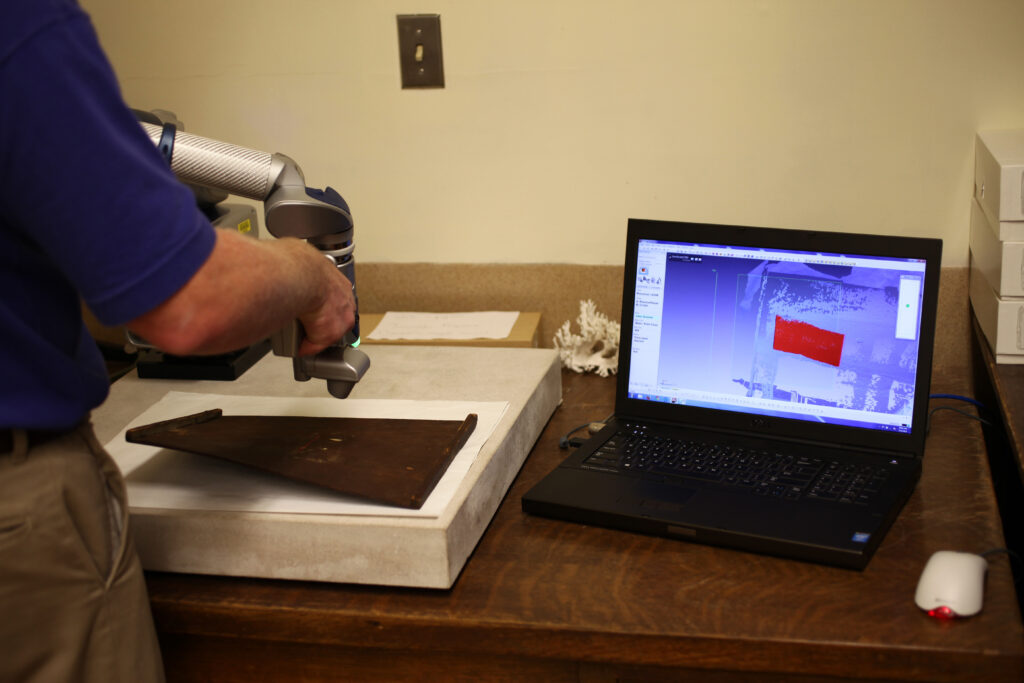 Several passes of the scan arm were needed due to the laser-absorptive capacity of the wooden panel. Once finished, the scanning process created a geometric mesh of 214,000 individual points, and polygons connecting those points to describe the surface of the panel: termed a ‘point cloud’ 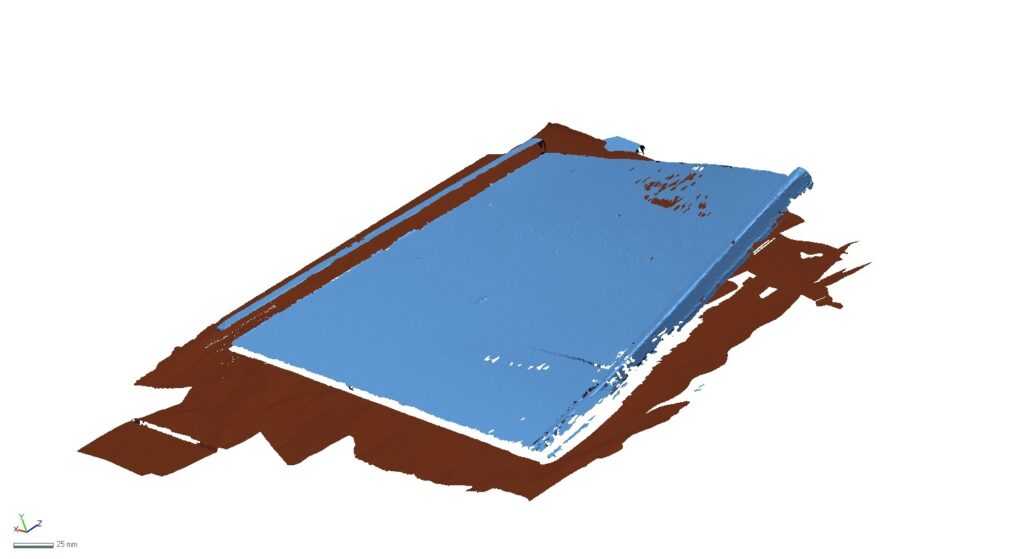 The scan data was then manipulated with Geomagic Design X to create a mathematically described surface which was exported to Rhino 3D for modelling. Surfaces were trimmed to create a volume which was scaled up roughly 2mm in order to create a marginally loose-fitting enclosure around it. 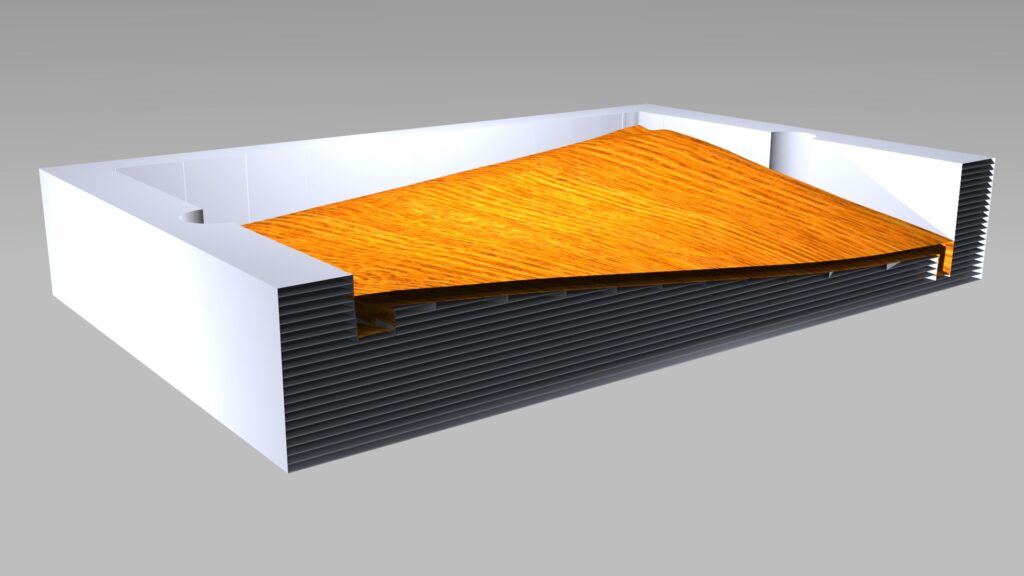 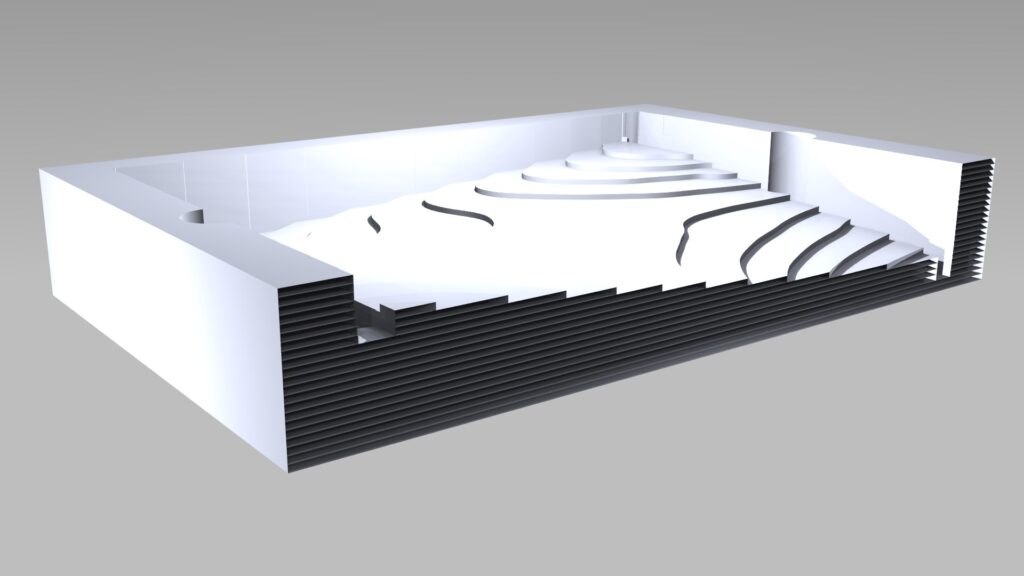 After a virtual enclosure was created that entailed a contour-fitting cushion as well as a 2.5cm margin around all sides with finger holes, the rendered volume was ‘sliced’ horizontally into 3.175mm thick layers to simulate the thickness of Volara foam. Volara Type A foam is a closed cell polyethylene foam used widely within the conservation community. Its smooth surface, 1/8” thickness, white color and relative ease of cutting made it the preferred choice, over archival sheet foams such as Ethafoam and Plastazote. The files describing the shape of each of these slices were exported in CAD .dxf format to our Kasemake machine, for the final cut-out supervised by our in-house enclosure specialist. 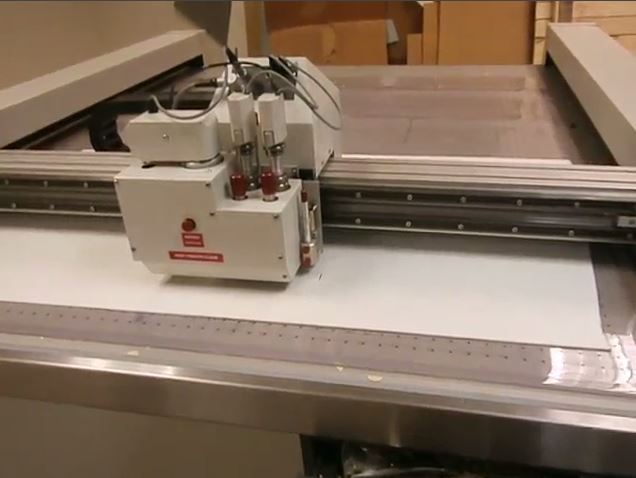 There was a minor complication with cutting in the form of a static charge that built up within the foam itself. Typically, the material to be cut is held to the cutting bed by air pressure generated from a vacuum pump underneath. In our case, a Teflon fitting on the cutting head and the Volara polyethylene foam built up sufficient static attraction to dislodge from the bed at times. This resulted in a slightly crooked cut in places, although the error was never greater than 2 mm in scale.

Once each layer was cut out, the stack was hand assembled with archival 3M #415 double-sided tape to create the final form as PVA glues and hot melt adhesives both present bonding difficulties. It should be noted that Volara Type A foam comes with an optional adhesive backing, reported by the manufacturer to be a non-yellowing acrylic base. We were unable to find any testing of this material within the conservation literature so decided to use our own bonding method. A fitted box, with separate tray and lid was also cut out on the Kasemake utilizing archival-quality E-flute corrugated board. 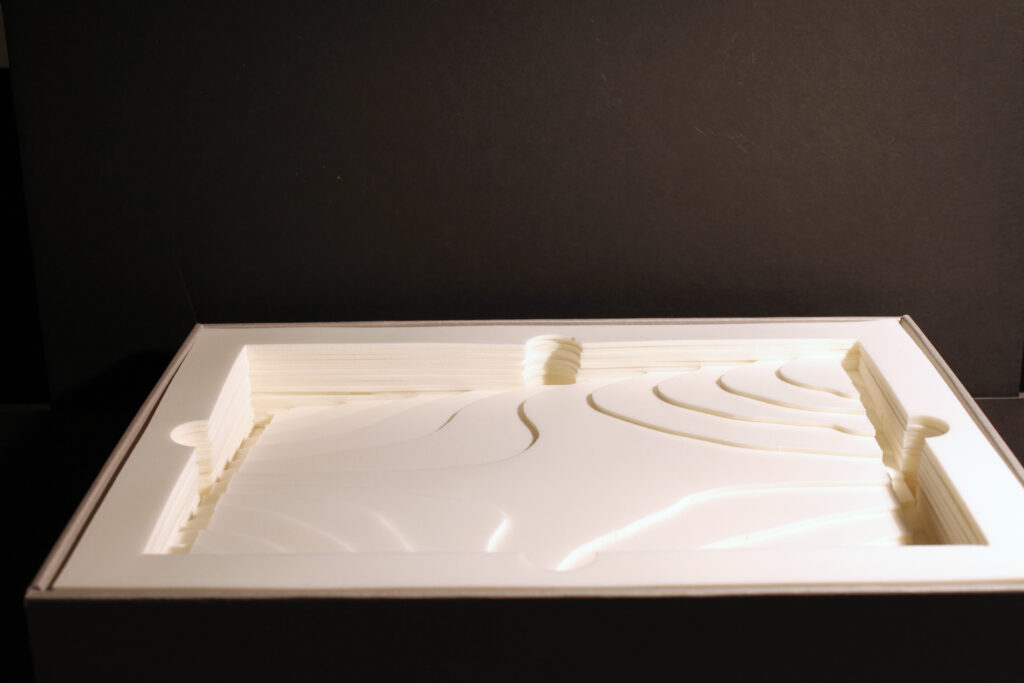 Though there was a considerable time investment for this initial investigation, the project is considered a success. The fragile wooden panel is now held and protected by a cushion of foam. For those labs and institutions without an automated cutting machine, the files of each individual layer could be exported to a large plotter printer and cut out of paper, to serve as templates for manually cutting foam.

Other areas of development lie in determining alternate methods of bonding the foam layers together. Some experimentation has shown that passing a hot needle through the layers can bond them together. The foam layers could also be modelled and oriented vertically, in effect wedging them into place in the box, perhaps alleviating the need for adhesion.

As more 3D scanning and fabrication products enter the market, we foresee greater development in customized storage solutions for collecting institutions. The Center for Biological Research Collections has expressed an interest in pursuing this collaboration further for the storage of some very fragile human remains in their paleontological collection. At the time of this posting, the Advanced Visualization Lab has purchased two new hand-held scanners; promising greater ease of use and portability. 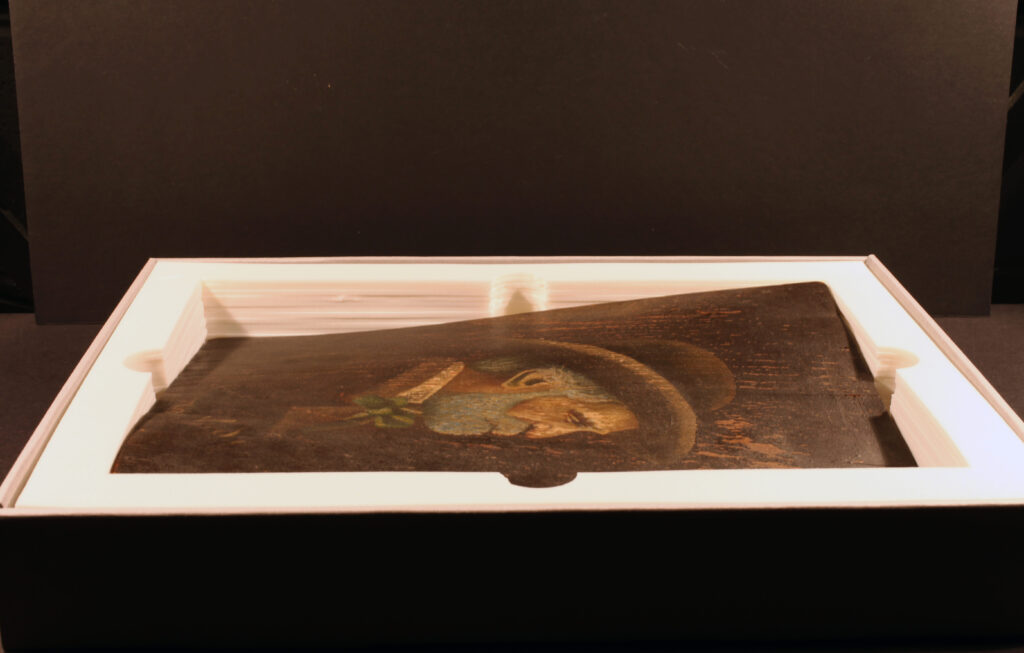 The author would like to extend thanks to those staff members of Indiana University who made this project possible: