Preservation folks spend a lot of time preparing for library disasters. We identify risks and mitigate the ones we can; stock up on plastic sheeting, flashlights, and all sorts of stuff; make contact lists, and train staff to be ready to respond when disaster strikes. While all those things are very important, to me the best preparation for a disaster is to experience one! Living through a disaster response/recovery effort concentrates the mind more effectively than reading any number of how-to guides.

So a postmortem discussion can be very instructive, not to mention cathartic! By going over what happened after the fact, lessons can be learned and are etched more firmly in peoples’ minds. When disaster strikes, it is often chaotic, you don’t have all the information you would like to have, yet you have to come up with a plan in relatively short order. If several people were involved, you can be sure each one saw or experienced something that others did not. Talking about what worked and what didn’t helps disaster team members be better prepared next time.

Disaster response should proceed in a deliberate way. Despite that each disaster is different, the experience of how you organized yourselves to carry out the response is valuable for coping with the next emergency. By following these steps, the chaos and confusion can be managed:

Why am I talking about disaster response and postmortems anyway? It is because after sixteen months and thousands of sheets of waxed paper and Reemay, I finally completed recovering four hundred sixty-nine books that were water-damaged over the Fourth of July holiday weekend in 2014 in the Library of the Kinsey Institute for Research in Sex, Gender, and Reproduction.

The leak probably started at the beginning of the three-day holiday, judging from the condition of the books when we got there. It happened to be over the part of the collection with books about sex in art and in film, so about 90% of them were heavily illustrated. You know what that means – lots of coated paper!

When we got to the Kinsey Library, about five staff there were removing wet books from the shelves and bringing them to the reading room. When I saw that the majority of the books had coated paper, and how many there were, I devised a plan and explained what we were going to do, including why dealing with the coated paper was the top priority. Coated (glossy) paper sticks together permanently once it has gotten wet and begins to dry. 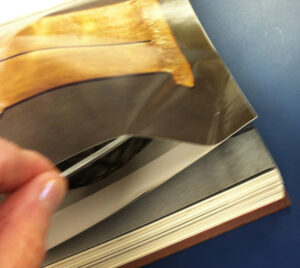 Coated paper with pages stuck together

Coated paper must be interleaved with non-stick material between every page, or frozen right away while still wet. So the plan was to sort books into three groups: 1) coated paper, 2) regular paper, saturated, and 3) regular paper, damp. We packed the books in milk-crate-like plastic totes, which we labeled as coated, saturated, or damp, and brought them back to the Preservation Department in our cars.

Once back in the lab, we knew that there were way too many books to air dry. We didn’t take time to count, but we guessed 300-400. We kept out the damp ones (about 120), and put the rest in one of our walk-in freezers. Those would be dealt with in batches using our Wei T’o Freezer-Dryer.

We air-dried the damp books, with fans set up all over the lab. That took a week or two. As we worked on the damp books, we discovered that some had coated paper. In the rush of packing up, and because it is risky to open up a wet book (wet paper tears very easily), the sorting had not been perfect. We interleaved the damp coated-paper books with waxed paper between every page. The rest were interleaved with paper towels, which were changed frequently.

My cranky grandpa Wei T’o, a freezer-dryer purchased by the Library in 1989, was my constant companion for over a year. 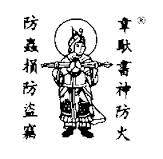 I say cranky because he broke down twice during the sixteen months, each time full of frozen books. And when he was working, it was a challenge to keep the temperature at the optimal setting. 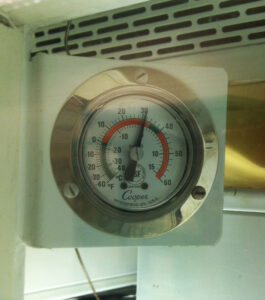 I took books out of the walk-in freezer in batches and placed them in the Wei T’o on the drying cycle (30 degrees F, high rate if air flow). Slowly, the books dried as the water content was sublimated, or turned into a vapor from the frozen state without becoming liquid. I checked them frequently, and as the icy blocks opened up, I added Reemay interleaving to promote drying, and reshaped and weighted them to reduce distortion. 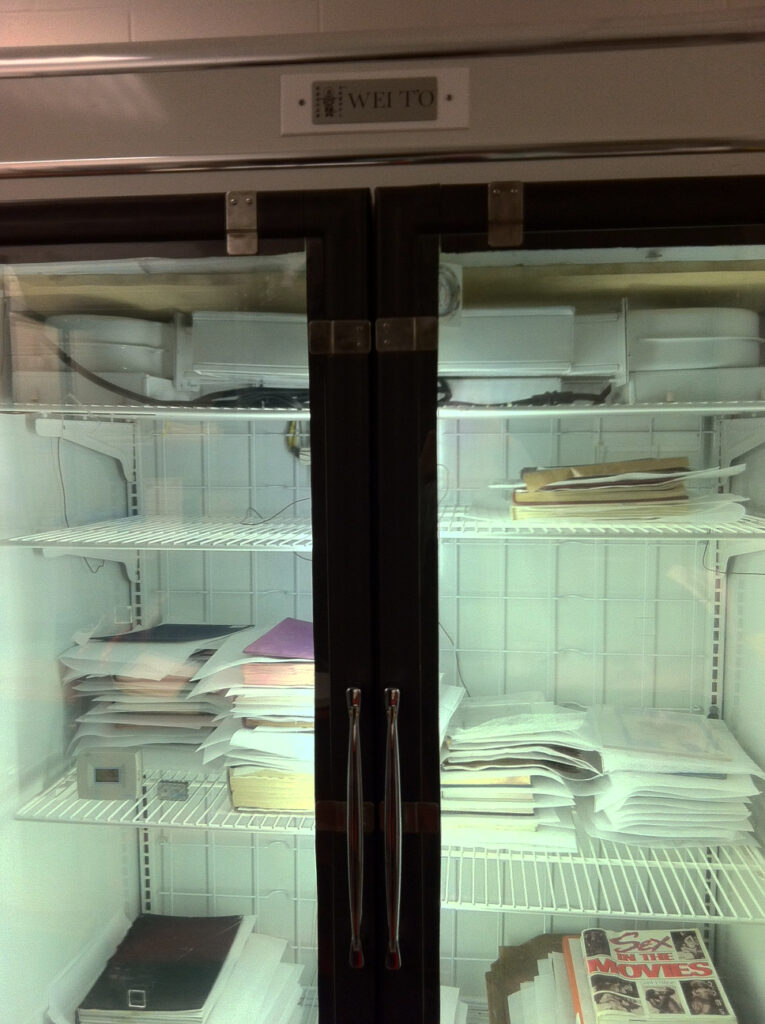 As they became almost dry, I took them out, usually air-dried in front of fans for a while, then put them into the book press to flatten.

Later we learned the cause of the leak. Here in south-central Indiana our water has a lot of limestone in it, and deposits build up inside pipes. In this case, the drain pipes in the heating and cooling system (over the library stacks) became clogged and the water found another way out, as it always does. The same problem has plagued Wells Library, but now steps have been taken to avoid this happening, including, among other things, regularly scheduled maintenance to check and clear the drains.

The Indiana University Office of Insurance, Loss Control & Claims requested I keep track of staff time spent on recovery, so I can report that we spent 91 hours over sixteen months on the recovery effort. It would have been just as many hours, but over a shorter period if not for the two Wei T’o outages. We contract with an outside company for service, and this added about 4 months to the time the Wei T’o was out of commission. Fortunately we have other freezers, so we could keep the books in a holding pattern until the Wei T’o was back in operation.

The final count of affected books was higher than we had guesstimated originally. I counted them as recovery was completed and the books were sent back to the Kinsey Library. In all there were 469 books. Nineteen needed repair or rebinding (4%) and 16 (3%) were unusable due to blocked pages (coated paper permanently stuck together).