This past November I had the pleasure of working with a newly acquired piece of   equipment- an Agility™ Transportable Dual-band Benchtop Raman Spectrometer to be specific. 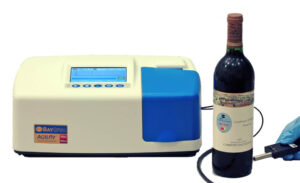 Vendor photo of Agility with a bottle of Cab Sauv

By way of background, a small team of various campus departments and research centers* was assembled over the past couple of years- all of whom are interested in exploring research interests related to analysis of cultural heritage materials. We applied for some internal funding this past year through the Office of the Vice Provost for Reaearch and were awarded a “Collaborative Research and Creative Funding” grant over the summer for the purpose of purchasing said piece of equipment.

What is Raman Spectroscopy?  In a nutshell, it is an analytical tool by which laser light interacts with molecular vibrations resulting in the energy of the laser photons being shifted up or down. The shift in energy gives information about the vibrational modes in the system. Basically, a machine shines a monochromatic laser at a substance and after some filtering, measures the shift in the radiation (in this case, light) coming off of it to give us an indication of its molecular nature. This is the sort of output one gets which then needs to be interpreted- the spectrum for red lead pigment: 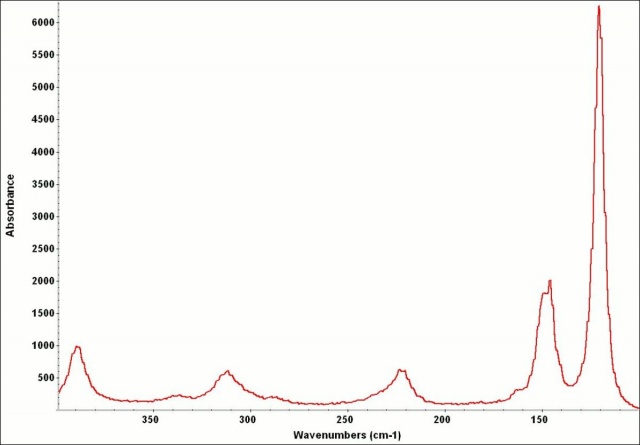 IU Bloomington already has a very sophisticated Raman spectrometer within the Department of Chemistry, but this new acquisition lets us to take the process to the object- important when examining rare items of cultural significance. This form of spectroscopy allows conservators to analyze materials in-situ in a non-destructive manner ie. other forms of analysis can require a sample to be taken from the item in question which will be destroyed in the process. Increasingly, analytical methods are being adopted which leave the item unharmed.

In practice, there is still quite a lot of skill needed to operate the machine and interpret the results. I was able to devote a day or two to learning the operating system, begin to understand the variables involved with adjusting the actual laser excitation (very important as misapplication can lead to irreversible changes in the material analyzed), and understand the difficulties of interpreting a series of peaks on a graph. There are spectral libraries available which automate the process, but the pharmaceutical library that came with purchase won’t help us out much when analyzing 17th century maps or archaeological daub from Paleo-Indian settlements, unless of course we’re looking for acetaminophen! Still, it will be a very valuable and collaborative tool to have on hand.

* Departments include: Department of Chemistry, Department of History and Philosophy of Science, Chymistry of Isaac Newton Project, Glenn Black Laboratory of Archaeology, Lilly Library and us, here in Library Preservation.