Sorry, this isn’t about alien spaceships. It is about how we designed an enclosure for delaminating lacquer discs so that their delicate surfaces do not come in contact with the box. 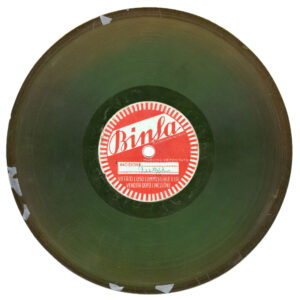 A large-scale preservation effort, known as the Media Digitization and Preservation Initative (MDPI), is underway at Indiana University to preserve all of the important time-based media held in IU’s libraries, archives, and research centers. Among the many time-based media treasures at IU are approximately 8,000 early lacquer disc sound recordings, almost all of them rare or unique. Most of them are from the fabulous collections of the Archives of Traditional Music and the William and Gayle Cook Music Library.

Lacquer discs are chemically unstable and therefore among the top priorities for preservation action. The lacquer (information) layer, which is made of nitrocellulose, deteriorates, begins to shrink, crack, and lift away from the disc surface. The conditions in which lacquer discs are stored (temperature and relative humidity) have the greatest impact on their rate of deterioration. Heat and moisture accelerate the chemical reactions that cause decay, so cool, dry storage is essential if they are to survive.

Lacquer discs in stable condition can be copied by playing the disc using a stylus, but those with delaminating lacquer can only be copied using an optical scanning technique known as IRENE.

So the immediate purpose of the floating disc box is to provide protection for the delaminating discs until they can be scanned optically. The usual storage method for sound discs is in sleeves and standing upright, but of course this is death to a delaminating lacquer disc. The boxes may also serve the purpose of permanent storage containers, since the majority of these recordings are unique, and future advances may provide better ways to capture and preserve the information they contain with greater fidelity.

We are fortunate in the IU Libraries Preservation Department to have a Kasemake automated box-making machine, which can cut, crease, and print on board stocks of various kinds from instructions transmitted from a CAD-like program. It can also cut circles as effortlessly as straight lines, which is a very nice thing!

Herb McBride, the Preservation Department’s Kasemake Specialist, and I developed the design for the floating disc box, made a few prototypes, and got feedback from Mike Casey, Jonathan Richardson, Melissa Widzinski, and Daniel Figurelli of the MDPI, until we were all happy with the design. Then we made a first batch of fifty boxes for 16” lacquer discs. (Lacquer discs come in other sizes too.) 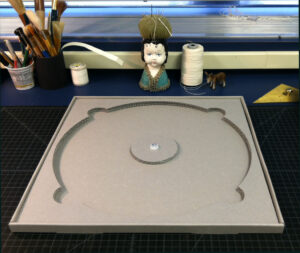 The box is constructed from the following parts: 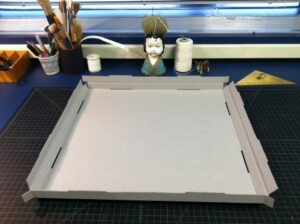 Bottom tray, not folded yet

First the bottom tray is folded up. 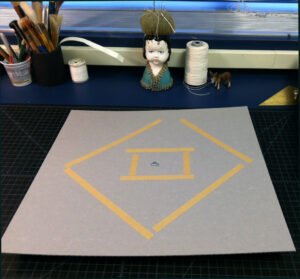 Underside of the liner, with screw post in place and double-sided tape (with backing still on)

Then the screw post is pushed through the liner’s center hole, and two donuts are pushed onto the post from the other side. Double-sided tape (3M 415) is used to adhere the liner to the bottom tray, and the window mats are adhered to the liner the same way.

The disc floats on top of the two donuts, then two plastic washers are placed over the disk on the post and then the screw half of the screw post is screwed in place. 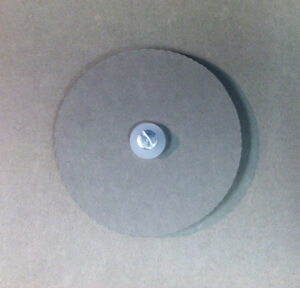 Two donuts, two plastic washers, and screw post. MDPI staff remove the screw and washers, put the disc in place, and replace the washers and screw on top. They have the option of putting one of the two donuts on top of the disc.

The disc is immobilized and only the paper label surface touches anything. The depth of the window mats and the screw post keep the box lid from touching the disc surface. 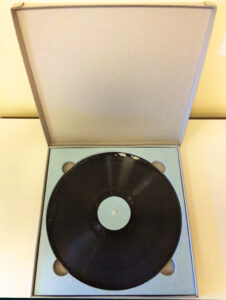 Box and lid with disc inside

We made fifty boxes on the Kasemake at the rate of about 8 minutes per box to cut and crease all the parts. Then we assembled them, which took about 15 minutes each to fold, stick on the tape, assemble the liner, post, donuts, and washers, and form the box lid (the corner flaps were adhered with PVA).