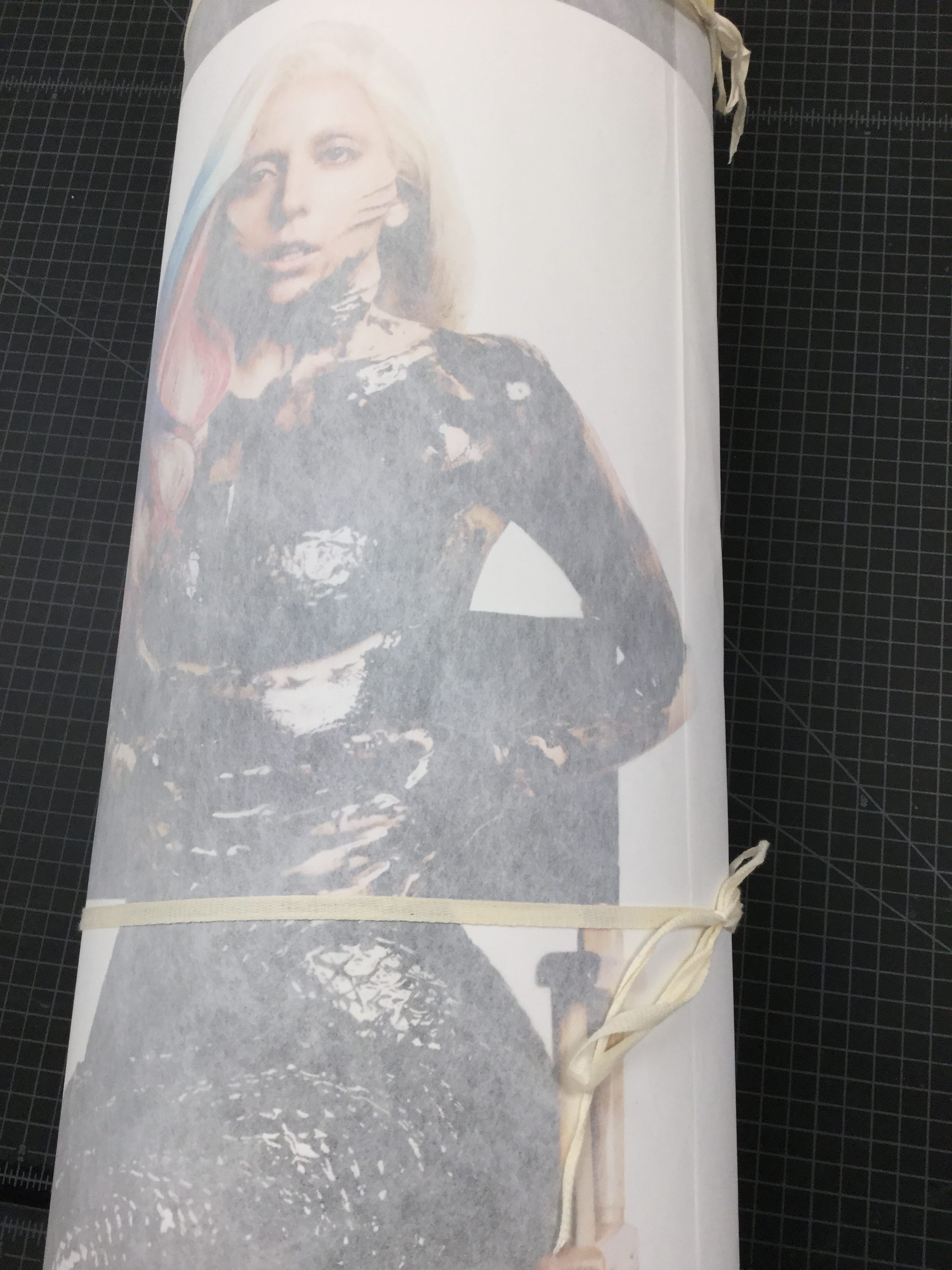 noun – a cigarette that one has rolled oneself

And the Urban Dictionary provides this usage –

“A situation where someone needs to perform a task but the method to complete the task doesn’t exist so she has to create the solution herself. It derives from “rolling your own” cigarettes versus buying pre-made cigarettes.

How is this relevant to our work in Preservation?

We decided to take a do-it-yourself approach recently when an issue of the luxury art and fashion journal, Visionaire, presented us with something of a challenge. 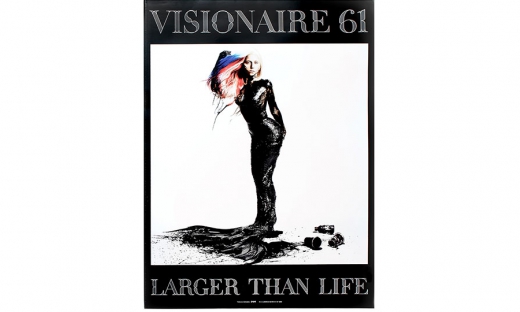 This special issue of the journal Visionaire, titled “Larger than Life,” features Lady Gaga on the cover and measures 36 x 50 inches.

This journal issue was too large to be stored flat. And although rolling is not ideal, as it may introduce a permanent curl, an object can be rolled onto the outside of a large-diameter tube to minimize this problem.  This also avoids the damage that can occur when the object is put inside the tube. So we decided we would buy a 10” diameter tube, roll the journal issue (consisting of just a few pages) around the tube, and make a box to put the tube in. Easy. Oh, just one problem – one tube costs $100!

Being thrifty, and not shying away from a challenge, we decided to try to make our own darn tube. We were not sure it would work! But we took a large sheet of 40-point acid-free board, rolled it up so it was about 8 inches in diameter, and held it together with many rubber bands. Then we just let it sit there like that for few months.

Every so often, we do a group project on a Friday. We like to call these “Fun Fridays.” Sometimes we tackle a project that needs many hands; other times we learn and practice a new technique. Previous Fun Fridays have included making pre-coated repair tissues and forming an assembly line to construct a large batch of Kasemake boxes for delaminating lacquer disk recordings.

So, after a few months passed, we decided to set the roll free one Friday. We took off the restraints. It looked good!

We got the ends of the roll aligned and positioned so it was 10 inches in diameter. We debated how best to affix the inner and outer long edges of the board, both to maintain the diameter and keep the outer end of the board from forming a ridge. After considering PVA, packaging tape, sewing, and 3M 415 double-sided tape, we decided on the double-sided tape. Some of us were more confident about the efficacy of this choice than others, which created some suspense! We applied it to both the inner and outer edges of the board. It took three pairs of hands, but it held!

Then we cut a sheet of Volara, an inert foam, to cover the roll, so the two long edges would meet exactly. We stuck that on with double-sided tape too. 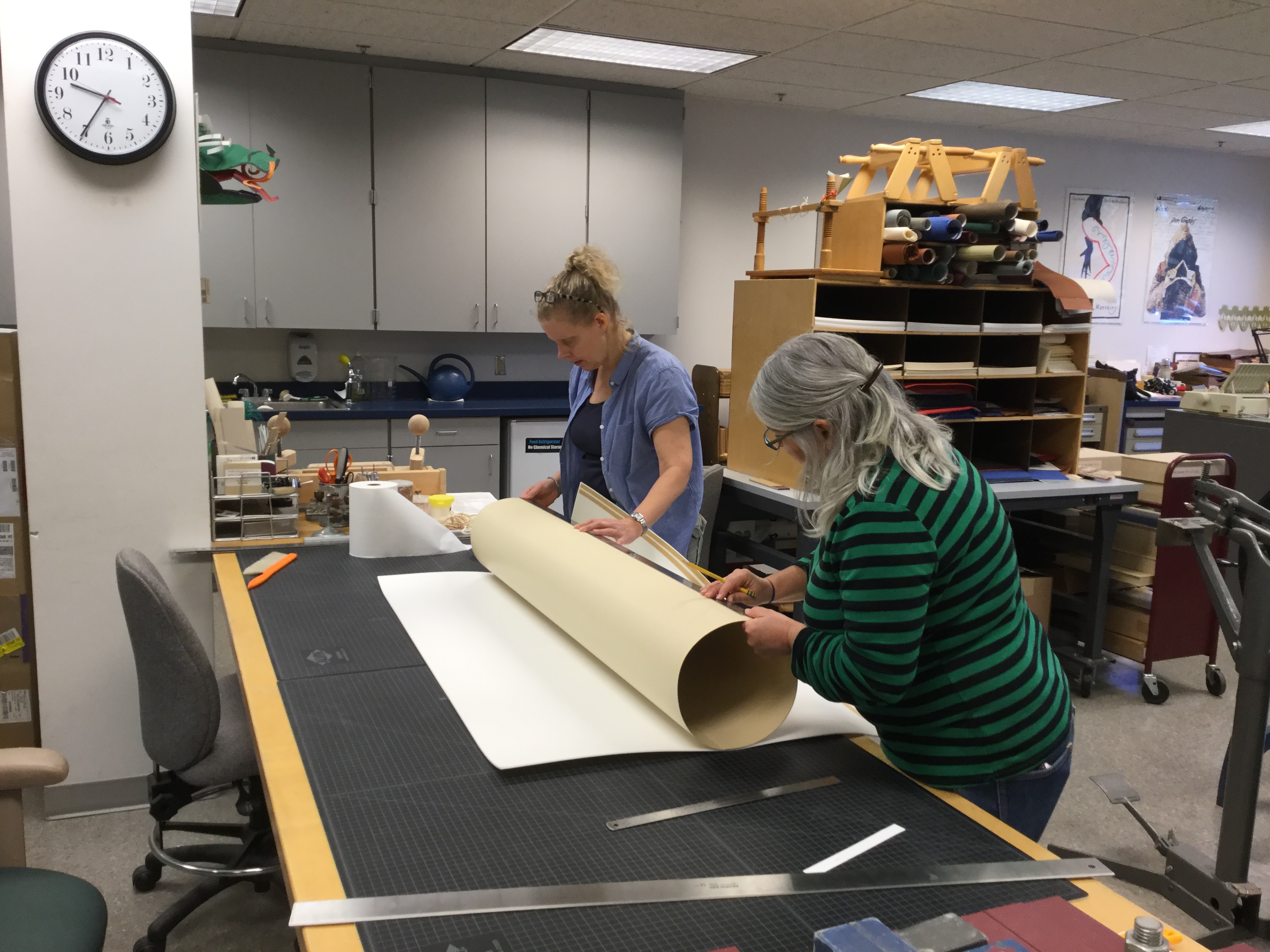 Anitta Salkola-White (left) and Lara Tokarski (right) marking a pencil line to guide the positioning of the Volara, after the long edges of the tube were stuck down.

Then we cut a piece of Hollytex the length of the tube, and about 8 inches wider than the object. We laid the object on top of the Hollytex and rolled the two onto the tube together, so that the extra 8-inch tail of Hollytex fully covered the object. We tied it with woven cloth ties. 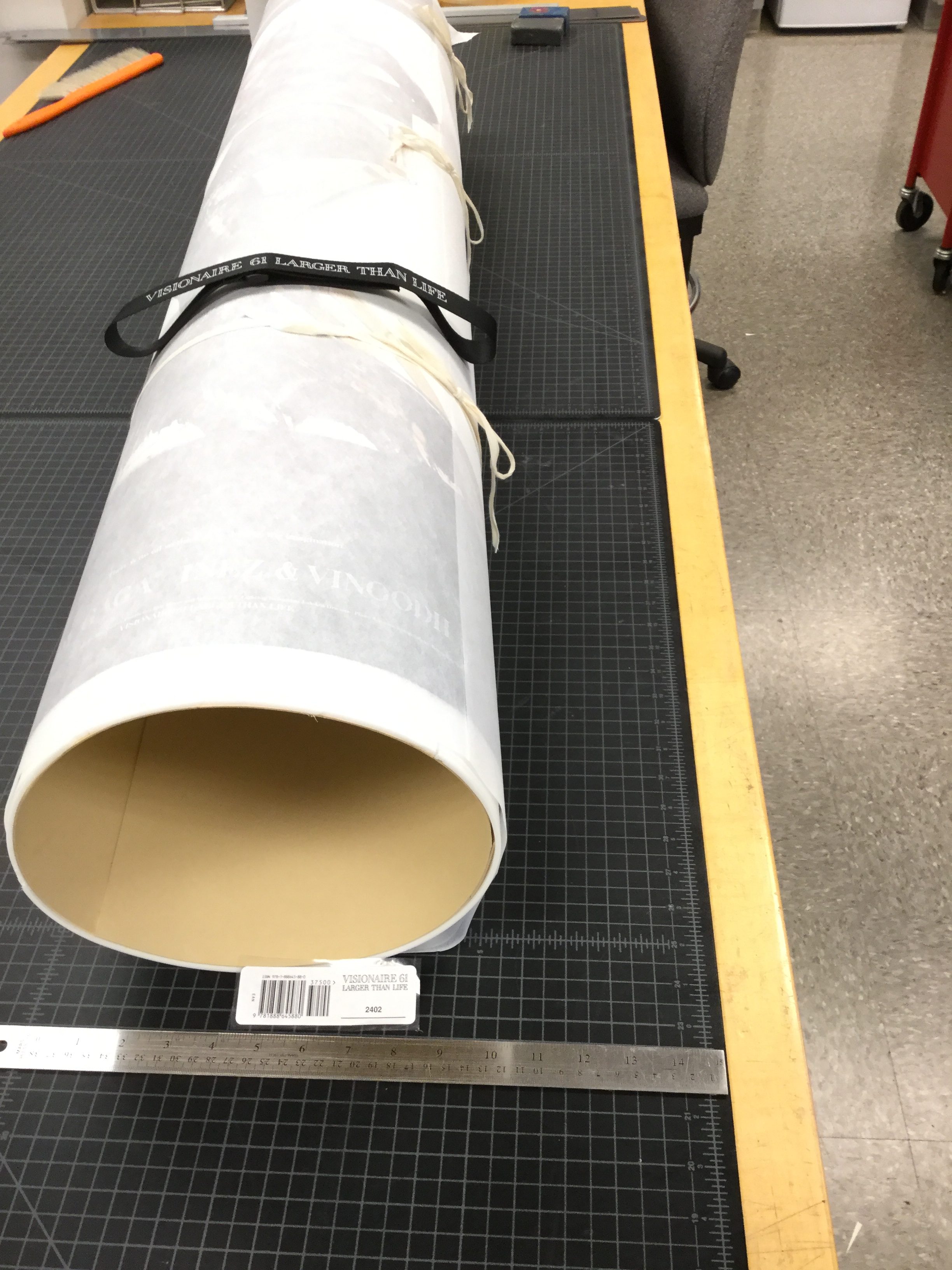 The journal issue rolled onto the Volara-padded tube, with a Hollytex liner, and tied with cloth tie.

Finally, we made a box with a lid out of acid-free corrugated board on our Kasemake machine. The 40 x 60-inch board stock was not long enough to make the bottom out of one piece, so we cut separate rectangles with 3 flaps to cover each end and glued them in place. 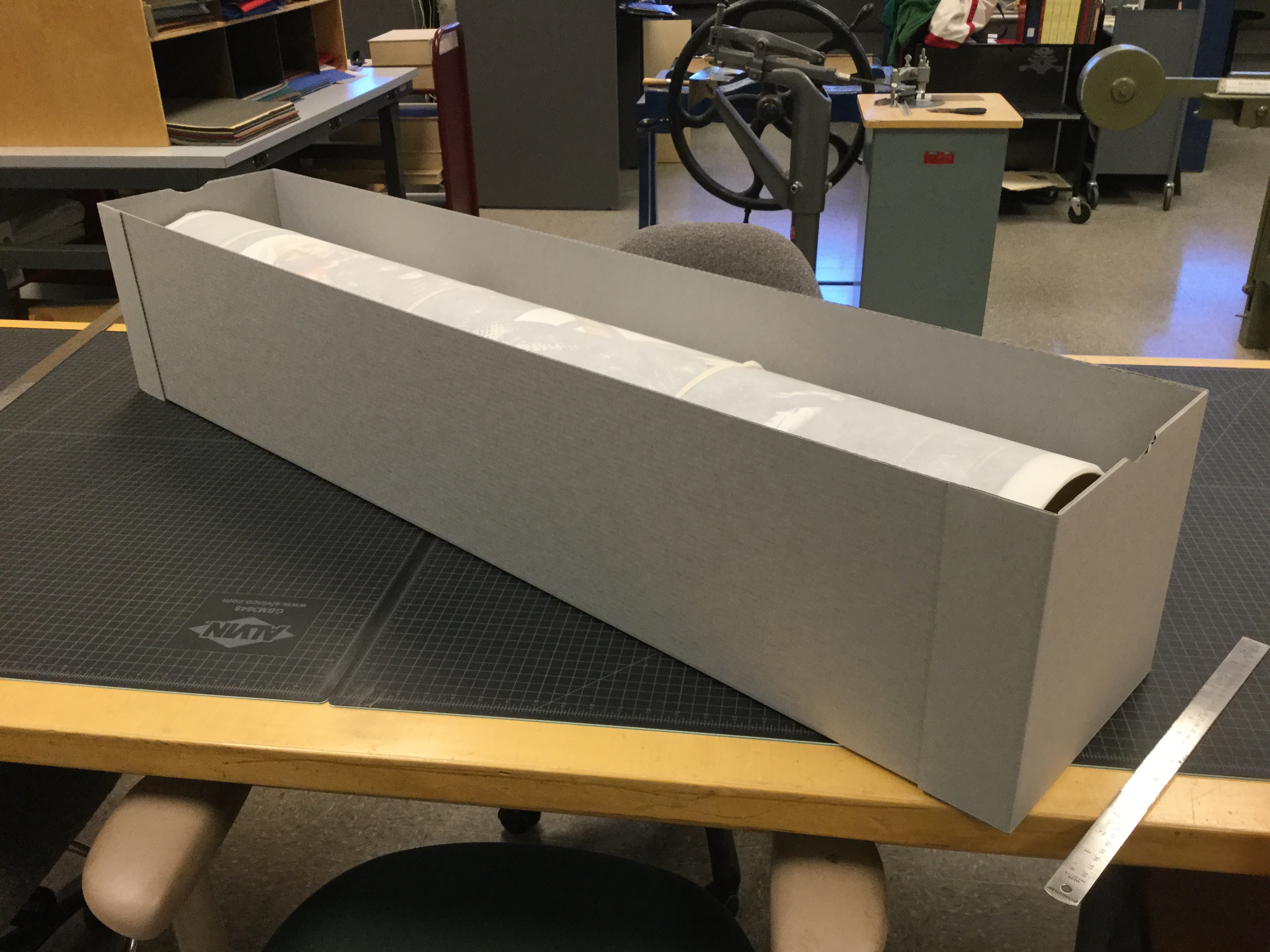 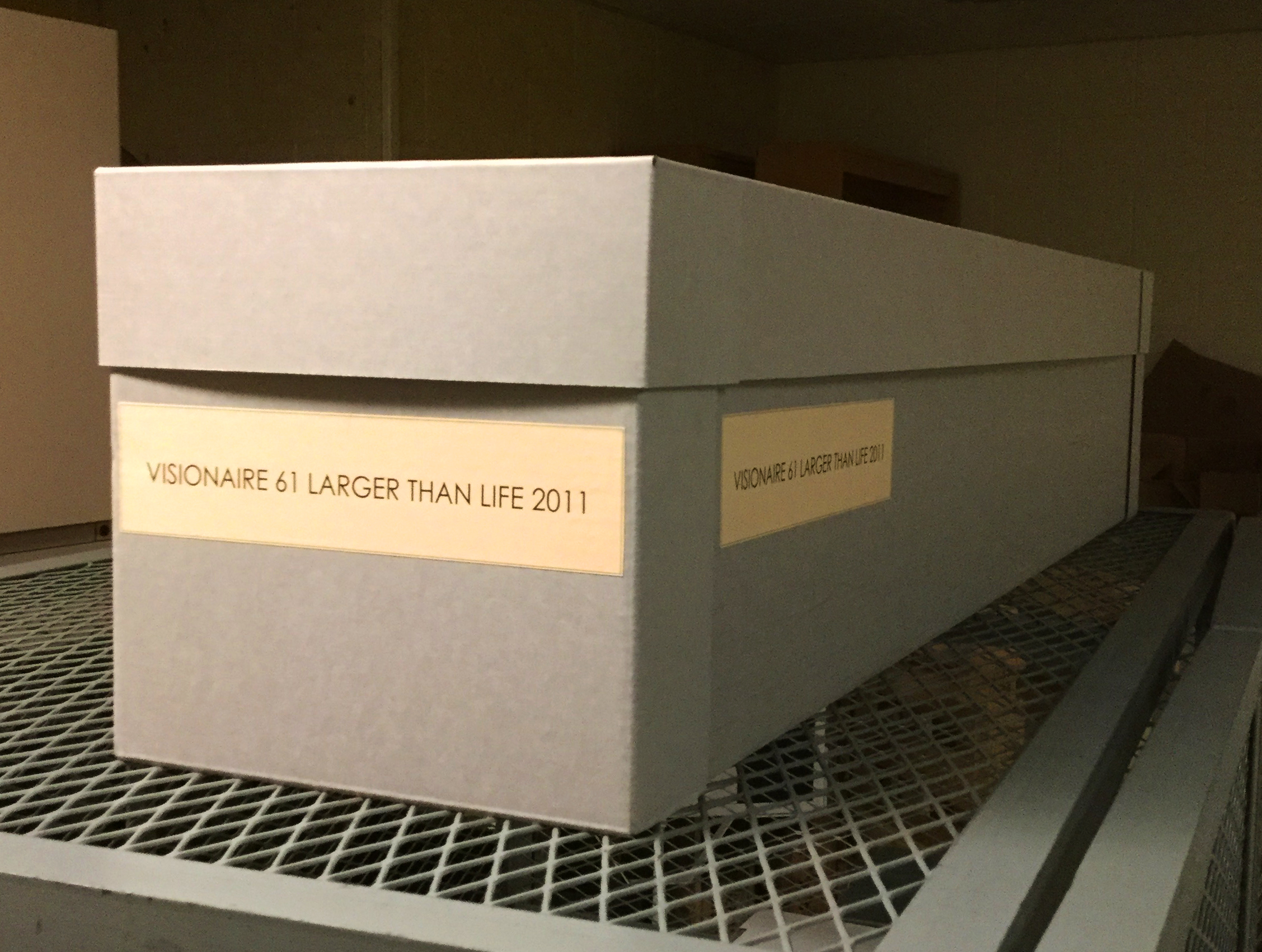 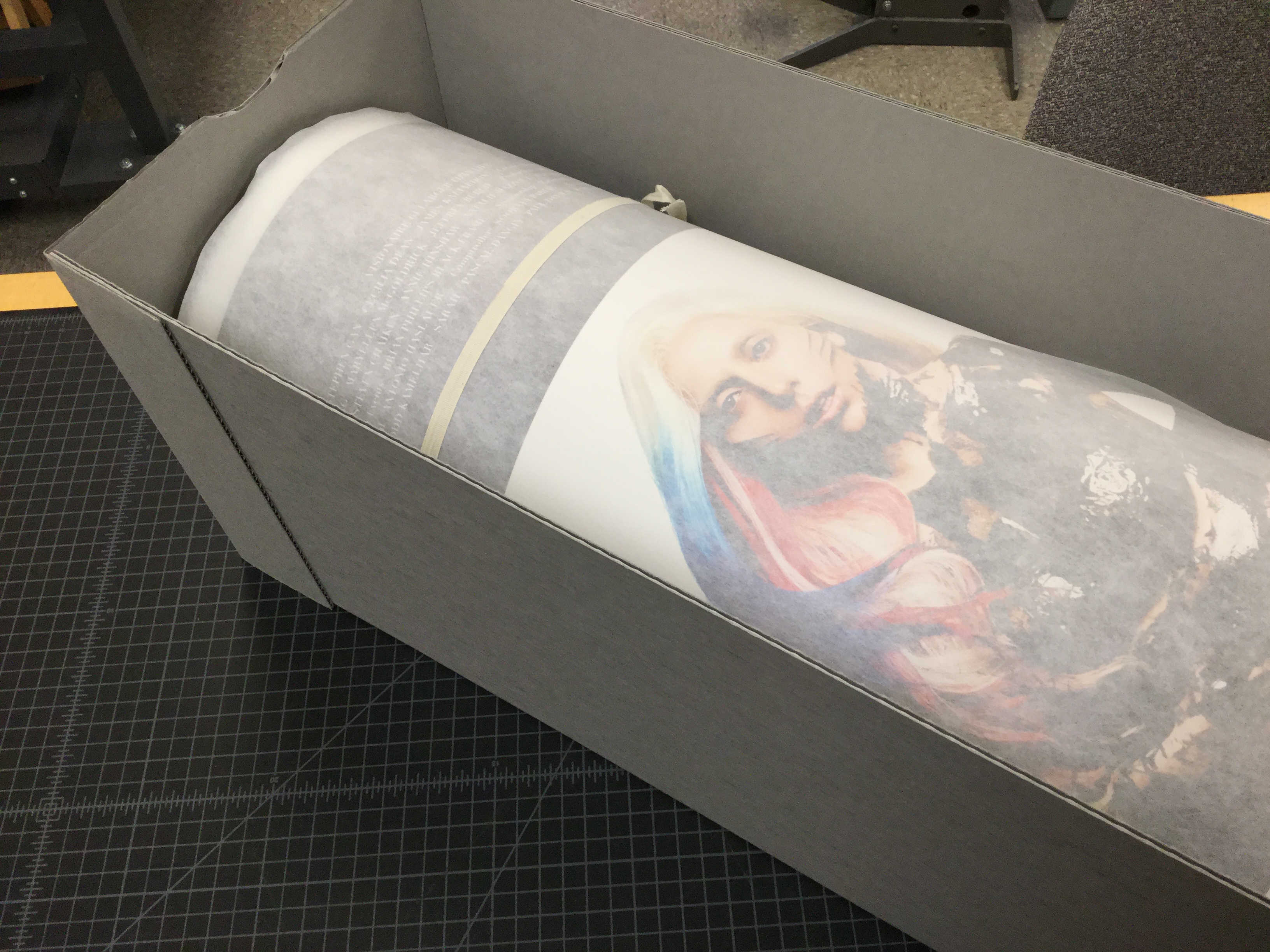 So, no, we didn’t have to “roll our own” , we could have just bought the $100 tube. But we learned it was possible to make one using materials already on hand in our lab, and had a great Fun Friday working together to solve a problem.