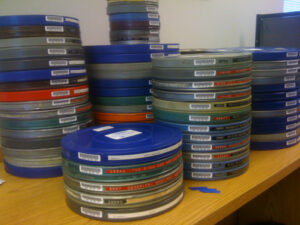 In October of 2011, the IU Libraries Film Archive acquired 12,000 educational films from the Lane Education Service District in Eugene, Oregon. The collection consists primarily of educational films made for elementary through university level students that were produced between the 1920s and 1980s. Genres of the films include science, the arts, physical education, biographies, world history, and instructional films along with some feature films including, The Red Balloon (video below), City Lights, and Paper Moon. Some of the educational films include Guernica (video below), Food Chains in the Ocean, Rise of English Socialism and Bicycle Safety. There are multiple copies of many titles and some that have upwards of ten copies. 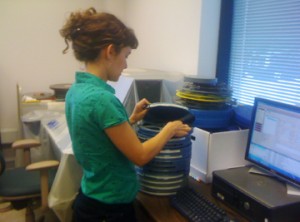 In April the process of adding these films to the collection at the Auxiliary Library Facility (ALF) began.  The process involves bar-coding each title, testing the films for vinegar syndrome with A-D strips, and then sending them to their final destination in the ALF vault where they are kept at a steady temperature of 50 degrees Fahrenheit and a humidity level of 30%. Over 95% of the films that have been tested are in great condition and with the climate controlled storage facilities their conditions will be stabilized for decades. The few films which have tested poorly are bagged in plastic and kept in a film freezer which maintains a constant temperature of -2 degrees Fahrenheit.  Presently over a third of the new collection has been tested and cataloged and will available through IUCAT after processing has been completed. IU Libraries Film Archive already houses a large variety of educational films and the new films will only add to the diversity of this immense collection.