When we speak of educational films, what exactly do we mean? For many people, memories of high school science classes come to mind. Or people recall the amusingly awkward acting, dated music and fashion, and cheap production value of instructional films.

Above: BBC parody on science films called “Look Around You” tackles sulphur.

However, the recently acquired Oregon Collection challenges and broadens our understanding of what constitutes an educational film and how their meanings change when placed in various contexts and settings.

Most people today tend to separate educational films from other kinds of film production, notably fiction features and documentaries. Yet, there is a semi-hidden history of film societies placing educational films as a major part of their programming. The most famous example was the New York-based film society, Cinema 16 (which operated from 1947-1963). Amos and Marcia Vogel founded Cinema 16 with the hopes of exploring and screening alternative types of cinema, ranging from documentaries to educational films to experimental films. Amos Vogel’s programming sensibility, by juxtaposing many different types of films, showed how thin the line was between documentary and educational films (ethnographic films) or the avant-garde and educational films (the work of Jean Painleve comes to mind). Also, the Vogels hoped that bringing these seemingly disparate groups of films into a single program would transform the way their audience saw the art of cinema. One could, they believed, approach educational films from an aesthetic perspective, as well as approach narrative fiction cinema from an educational perspective. 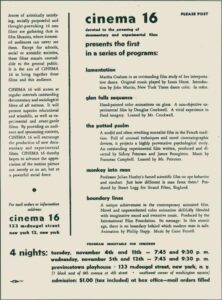 A documentary on Amos Vogel’s life and work:

Film as a Subversive Art from Paul Cronin on Vimeo.