“This is like writing with light!” exclaims a young teacher in the 1956 instructional film Handmade Materials for Projection. What activity is she engaging in that was so exciting as to inspire her to reach for such an evocative metaphor? Well, if you chose scratching on a piece of carbon paper on an overhead projector for a lesson in how-to-write a business letter then you’d be right. 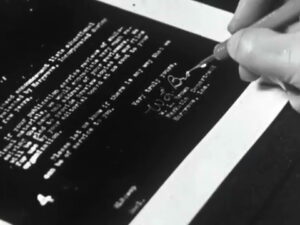 That this rather mundane activity could prompt an educator to such poetic musings might be attributed to the often over-blown rhetoric found in educational films in the 1950s. However, I submit that moments such as these, which might seem corny to us now, are actually rather revealing insights into the ways that teachers and students thought about and experienced educational films. Or, to be more accurate, how the filmmakers imagined teachers and students experienced educational films. Examining these now out-of-date classroom films gives us an insight into how producers and educators predicted that the films would be viewed and utilized. As such, this affords us a chance to study earlier cultural assumptions about the pedagogical role of media, which, ideally opens up a discussion of the forces guiding our current digital mediation and technologization of education. 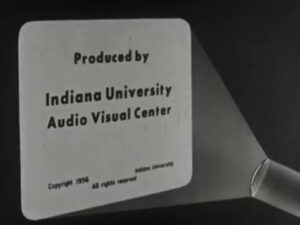 The film represents itself being screened in the classroom.

For a film that rather programmatically trained educators in how to inexpensively make their own slides and transparencies for projection in the classroom, the film is filled with these moments of wonder, even if they are occasionally tempered by the rational voice of the teacher. In addition to the example above, another instructor demonstrates a technique that she calls the dry dusting method. This tool allows her to accurately, and almost magically, trace shapes into carbon paper in front of her students. The filmed presentation at the 12:14 mark in the video does indeed have more than just a little of the fantastic about it. The drawing seems to appear before our eyes. As she states, her drawing on the overhead projector is more than just a representation of the object she is lecturing on. Instead, it’s “a living, meaningful diagram which developed with my lecture … as a way of capturing and holding the attention of my audience.” 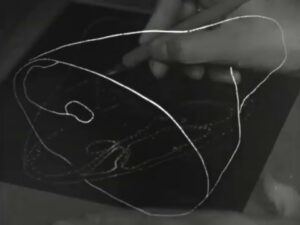 This quote gets at why teachers used, and continue to use, mass media in the classroom, an impulse that is essential to the creation of the films that are at the core of the Indiana University Libraries Film Archive. First, media, even something as unremarkable as an overhead projection, brings the lesson to life. Second, it’s not a frivolous animation but one that’s intimately yoked to the educational goal of the class. Third, and this is no small shakes here, the use of media in the classroom allows a teacher to keep the students focused on what she is saying. Classroom media was used to make a lecture exciting, had to have a clear pedagogical mission, and was deployed to regulate student behavior. (No students are actually seen in this film; the film presents no proof that these techniques actually interest schoolchildren which points to one of the great unknowns in educational film: what did the students sitting in the classroom actually think of these mediated instructions).

As this film and others like it such as Photographic Slides for Instruction (1956) and How to Make Homemade Lantern Slides (1947), both of which are embedded at the end of this post, suggest educational films were not just made for students, but also for teachers to instruct them in how to incorporate the then new media into their classroom. Further, educational films were part of a much larger infrastructure in media available for the classroom including filmstrips, records, slides, and overhead projectors – and eventually cassette tapes, videotape, and now Power Point. This is an important point to realize when watching old educational films. They rarely stood alone and were often part of a larger educational effort that might have included textbooks, suggested lesson plans, slides, etc. So while we will be mainly posting videos digitized from old educational films, please keep in mind that there was a larger media ecosystem in the classroom that these films are only one example of.

In fact, the educational author of this film, Harvey R. Frye, published a very similar article in the August 1957 issue of the Journal of the Society of Motion Picture and Television Engineers called “Slide-Projection Materials on Minimum Budgets.” In comparing the article and the film, the advantages in each medium for teaching becomes quickly apparent: each has more or less the same information, but the journal article allowed a teacher to easily go back over the techniques of making slides while the film includes dramatized examples of teachers in awe at the process.

In fact, what each medium allowed a teacher to do was at the core of Frye’s efforts in training educators to use media for pedagogical purposes. As he and his co-author Ed Minor assert in the introduction to their 1970 book, Techniques for Producing Visual Instructional Media, having a sense of the specificity of each medium was the key to knowing how to utilize mass media in the classroom. They state unequivocally that, “materials should be prepared only when they will do the job of communicating better and quicker than any other method of communication available”. 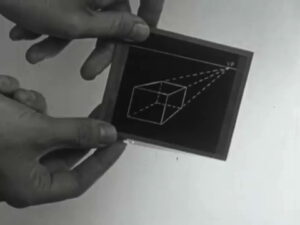 “…Communicating better and quicker than any other method of communication…”

In the off chance that anyone reading this posting knew Harvey Frye or other filmmakers at the IU Audio-Visual Center please contact us. We are in the process of researching the production and exhibition of these films and any help would be much appreciated.