“Everyone likes to watch and listen to a marching band as it goes swaying by in perfect rhythm. It looks easy, this marching and playing together.  It may look easy, but many long hours of practice were necessary to turn these already accomplished musicians into a crack marching outfit.”

It is not often that, while standing on a corner waiting to cross a street, you hear a car blasting “Stars and Stripes Forever” by John Philip Sousa. More often — especially at college football games or parades for any given given holiday (particularly patriotic ones) — you’re likely to hear Sousa being blasted by a marching band. Whether the average American thinks about marching bands very often may not be quantifiable. It is clear that those who are in or are an alumni of a marching band think about it a lot (if you Google “marching band sport” you’ll see plenty of passionate essays seeking to legitimize the activity to the mainstream and revealing just how difficult — and engrossing — it is). Major competitions happen often, and band members spend much of their free time rehearsing not just the music but the minutiae that a very long history of marching bands demand to create, as the narrator of the film says, a “crack marching outfit.” 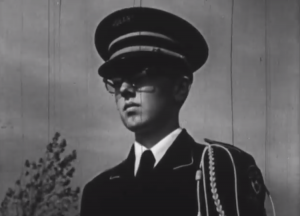 Marching Band Fundamentals, one of the many educational films produced by the IU Audio-Visual Center which is now held by the Indiana University Libraries Film Archive (IULFA), explores this minutiae, yes, but more accurately serves as a live instruction guide for directors and “bandsmen.” For those of us who were never part of a marching band the details might be overwhelming. Notice the amount of military terms that occur before the six minute mark (“rank,” “file” “paces”, etc.). And, of course, the emphasis on shiny shoes and nice haircuts. 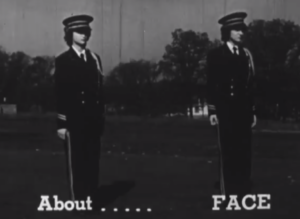 These “bandsmen” are actually women!

The observant viewer will notice many “bandsmen” whose haircuts may not be as tidy as the others; that’s because they’re women, referred to over and over again as “bandsmen” and “he.” This is not uncommon for educational films of this era, but the camera’s focus on these members of the band while the narrator uses gendered terms might be disconcerting for  the 21st-Century viewer or, at the very least, cause some confusion when curls spill out of members’ caps.

Perhaps an image that comes into the viewers mind as they watch the band go through their very specific motions is one of a stifling auditorium or gym filled with marching band members laboriously attempting to learn the commands from the film, as if they were dance instructions or a jazzercise video. Based on the very pedantic nature of the film it could have been used as such, so long as the projector was able to be stopped and the film rewound to repeat unclear commands. More than likely, however, it was for fledgling band directors in need of a refresher or for band director’s assistants who were in training. This assumption is made based on the work of the two men responsible for writing the film.

Daniel L. Martino came to Indiana University in 1948 from Ohio University where he quickly established four concert units in the Department of Bands. Famously, he was the director of the Indiana University Marching Hundred which was deemed by John Philip Sousa in 1925 to be “the snappiest marching and playing band in the country.” During Mr. Martino’s tenure as the director of the Marching Hundred the band made three consecutive appearances at the Indianapolis 500, the Kentucky Derby, and, in 1953, was part of Dwight Eisenhower’s inaugural parade in Washington, D.C. In 1952 Martino released a book entitled Effective School Band Management which likely served as the textual counterpart to this film. 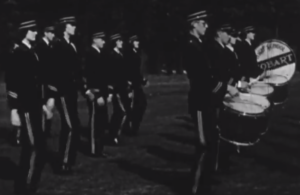 Richard A. Worthington, Martino’s co-writer, was band director for Hobart City Schools, an Indiana town just South of Chicago, and was working on his doctorate at the time of the film’s creation. Later he took a position at Northern Illinois Teachers College. Their embrace of film for marching band education makes sense; diagrams, commands, and marching figures are much clearer on film, can be shown again and again, and were likely much more understandable to the newest members of any given band.

An interesting feature of this otherwise very specific and somewhat pedantic film is the use of slow motion. High speed cameras would become indispensable to the field of biomechanics in the 1970s, but this simpler version — showing movement required of band members — was likely a remarkable achievement in marching band education. Again, combined with the ability to stop and rewind the film, those members in stifling gyms or auditoriums would, hopefully, learn their steps quicker, and get to the learning and practicing of music — which does not come until there is less than a minute left in the film — faster. 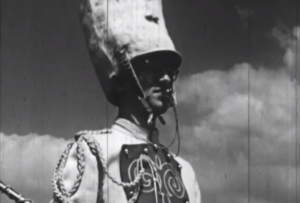 The drum major looks on with grave intensity.

While perhaps not the most engrossing film for the casual viewer, Marching Band Fundamentals Parts 1 and 2 is a glimpse into the promise of group education through film. Its combination of live-action, animation, and slow-motion would have been a novel and very helpful tool for band directors used to relying on rote learning and militaristic methods alone. Imagine the sigh of relief the director might feel when given the opportunity to let the film do the talking for them, allowing them time to let their strained vocal cords heal enough to scream a little bit more at the drum majors as soon as the film had run its course. Additionally, the film sheds some light on the intensity of an activity that is often so well-rehearsed, it’s made to look easy. If you were a marching band member you already know all of this. Those of us — myself included — who never experienced it, can now understand a little bit more why committed marching band members were so intense about it. Come on, that looks pretty hard!

If you like this film there are plenty more Indiana University produced educational films streaming for your viewing pleasure. Check them out!