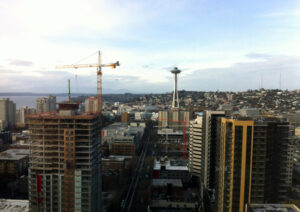 A view of Seattle from the conference hotel.

One month ago, a small gathering of film enthusiasts and archivists came together for a few days in Seattle to partake in the 22nd annual Association of Moving Image Archivists (AMIA) conference. On an oddly sunny Tuesday morning in the Pacific Northwest, AMIA kicked off with the ffmpeg4archivists Workshop held by Dave Rice. And so it was, my first AMIA conference had officially begun. After soaking in some ffmpeg knowledge, it was off to The Reel Thing to catch a glimpse of some recent restoration projects along with some groundbreaking and interesting new technologies.

At the Newcomer’s Mixer, Stacy Doyle of the Black Film Center Archive and I had breakfast with an audio engineer from Sony. This was followed by a humbling and inspiring video from AudioVisual Preservation Solutions (AVPS) and New York University Moving Image Archive Program (MIAP) students, showcasing their trials during the aftermath of Sandy at Eyebeam. The next three days were packed with interesting topics including everything from colorspace, ephemeral TV content and Digital Cinema Distribution Masters (DCDM), to working in a digital world, access, and preservation through reuse.  It was very difficult to decide which session to attend or which two the hour and a half period would be divided into. It would be a disservice to attempt to recap the entire conference but this will be a stab at narrowing it down to a few highlights. 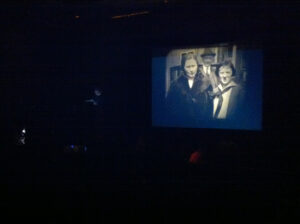 Taken during 28mm: A New Look at Old Films.

Make It So: Initiating Audiovisual Preservation, was a talk by a group of relatively recent Master’s graduates that gave an inspiring look at startup projects from around the country and the challenges we are all facing with media preservation. They definitely gave a glimpse of hope for soon-to-be-graduates entering the job market.

A Decade of Home Movie Day contained personal stories from around the country and tips for starting one in your own hometown. Ruta Abolins, of the University of Georgia, was asked during one screening while touring the state, “Will you be here again next week?” For an annual event, this was definitely a compliment.

Access and digitization were hot topics in many panels. Members from WGBH and Northeast Historic Film discussed these areas in depth during Collaboration and Participation in Action – New Ways to Create Online Collections.

Skip Elsheimer, of AV Geeks, talked about CatDV, XMedia Recode, and MPEG Streamclip while Dave Rice of AVPS gave us his words of wisdom about preservation: “If you are a tape, and live in a cool, dry place, you will live longer” during their talk, Man vs. Machine, with Jimi Jones, Archivist at Hampshire College.

Walter Forsberg of NYU and Cassie Blake from the Academy Film Archive, presented their project on movie snipes as sociocultural signifiers. A wonderful montage with catchy tunes, animated food, puppies, and more hot dogs with mustard than one could imagine… by the end we were all ready to go the lobby and get ourselves a treat. 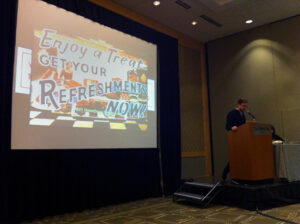 So many people I spoke with had incredibly varied backgrounds along with a multitude of life and job experiences that brought them to where they are now.  Some had been in the field for well over 30 years; one woman currently works for an oil company and is considering a career change; others simply have a passion for film.  At one point near the end of the conference I had one of those rare but highly sought-after moments in life — when we get to experience the feeling that says “I have found my people.”

In the end, the true beauty of AMIA was that all of our paths were brought together for a few days by one common interest.  Recent industry developments have led some people say that film is dead.  However, something can’t be dead if there is still so much life left in it.  If even a small number of these people have anything to do with it, this pulse will continue to beat for years to come.