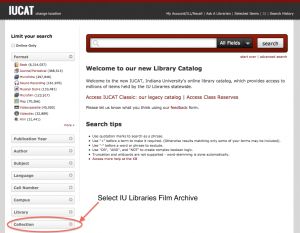 The Collection field at IUCat

The IU Libraries Film Archive’s catalog records can be searched by selecting the archive in the “Collection” pulldown menu on the main page of IUCat.

Originally, the Lane Education Service District loaned these films out to the 16 school districts in Lane County, Oregon. Centralizing large film collections in this manner was a common way to efficiently and economically serve a larger public with a greater range of films than if each school bought their own films. In fact, Indiana University began collecting and distributing films in the 1920s along similar lines. IU was part of the University Extension movement where state universities would mange and share educational media throughout their state. 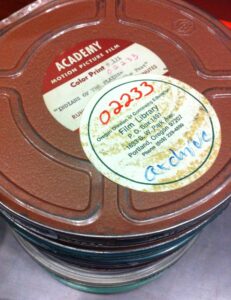 These 7,327 titles span the history of educational filmmaking from the 1940s through the early 90s. Looking at the collection as a whole presents a narrative of what educators thought were the pressing issues of their times. At this macro level, these films reveal changing attitudes to teaching methods and social issues. The Lane Education Service District will be of interest to scholars from a wide range of interests including the history of popular science, how children learned about sexuality and human development, the anti-drug movement, views on disabilities, and much more.

The films are equally intriguing at the level of the individual title. To pick a title at random, Signals And Gestures In Traffic Direction, brings up a 1954 film with the following brief description from the online catalog: “Demonstrates the proper signals and gestures for traffic officers to use in directing traffic.”[1] Unfortunately, the film isn’t digitized yet – though one can watch it onsite at the IU Libraries Film Archive – so we can’t get a direct sense of how the film accomplished its training mission.

But a quick search for the title in the Media History Digital Library’s Lantern search tool uncovers an article on page 60 of the 1954 Business Screen Magazine Production Review, “Visual Training Program for Traffic Officers Sponsored by Insurance Group.” Signals and Gestures was the first in a four-part series of films sponsored by the National Association of Automotive Mutual Insurance Companies designed to train “officers directing traffic from Maine to California” so they are “doing it in exactly the same way.” Vogue-Wright Studios, a Chicago film company that made industrial and public relation films, produced it. The Traffic Institute of Northwestern University, described as “a national enforcement authority,” offered technical advice on the film’s content. 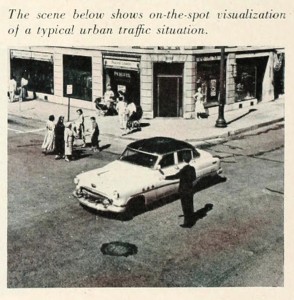 Signals and Gestures in Traffic Direction shows how commercial interests and higher education united their interests through educational filmmaking to manage and standardize behavior at a national level. Why this film, made to train traffic cops, is in a collection of classroom films primarily directed at elementary students is a whole other question. But it points to the way these films, seemingly fun and innocuous, deployed educational media as an extension of corporate and governmental interests, and how the classroom screening was a site where competing views on profit and pedagogy came into contest.

And an EXTRA SPECIAL THANKS goes out to all of the people whose work made these records accessible:

And the IU Libraries Film Archive excellent employees: Sean Smalley, Asia Harman, Josephine McRobbie, Jason Evans Groth and Jacob Shelby for identifying, bar-coding and linking each and every physical film to it’s catalog record and recanning the films and testing for deterioration.

Also, thanks as always to the remarkable Auxilliary Library Facility staff of Vaughn Nuest, Matt Myers, Sean Frey, Meko Mai and Craig Kinney for ingesting and shelving all 12,745 film cans for long term preservation storage at the ALF facility.