We know you are salivating for another scrumptious Social Guidance Sunday so we are pleased to close out the spring semester with a treat! “Mmmm! Digesting Educational Films about Food” dishes out delicacies featuring good nutrition, funny industry films, and morsels of movie magic to munch on. 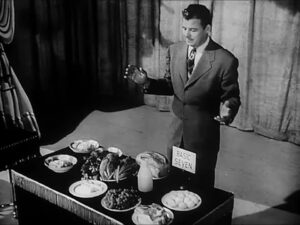 Cut from the highest grade and arranged to perfection, we bring you an array of savory 16mm films. The appetizer is a short classroom film from 1951 featuring Bill, a glutton for junk food (Good Eating Habits, 1951). The first course will be Eating on the Run (1975), a comical film featuring good nutrition and the importance of taking time out to savor your food.

In Mystery in the Kitchen, we experience a little domestic intrigue as we follow an invisible detective as he investigates an average housewife’s meal preparation for her family.

Housewives bear the burden of making sure their families are well-fed as we see in the third course, Food and Magic (1943), where Mysto the Magician explains better food management to prevent waste. Dessert will be brought to us by the U.S. Department of Agriculture who made a comical film featuring the importance of statistics and selecting food. Even if you don’t much care for math, this film will have you craving for more numbers!

We encourage you to eat, drink, and be merry as we bring you foodies films that inspire critical reflection as well as a satisfied pat on the stomach. Our guest programmer for this delicacy is Rebecca J. Butorac, a food studies scholar who is interested in the intersections between food, social class, and culture. She is particularly interested in how media portrayals of “correct” shopping, eating, and housekeeping habits tend to ignore the social, cultural, and economic differences that shape our attitudes toward – and access to – food.

If this program makes you hungry, and we are positive it will, there will be food trucks stationed outside of the Bishop for your dining needs. Food trucks will be available starting around 7pm. The show will begin at 8pm on Sunday, April 17th. 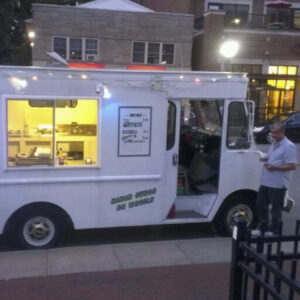 Bloomington’s Gyro Truck will be outside of the Bishop from 6:30pm-8:30pm on Sunday, April 17th!