Hello! My name is Robert Anen and I’m a graduate student who’s currently enrolled in NYU’s Tisch School of the Arts, Moving Image and Preservation program. At the moment I am halfway through the program and as a requirement, I have to intern throughout the summer. This has landed me here at Indiana University Libraries’ Moving Image Archive. This week marks my fifth week here and I have five more to go.  While I’m here I will have a chance to witness the inner workings of a moving image archive for the very first time in my career. Indiana University Libraries’ Moving Image Archive has also moved into a beautiful new space on the ground floor of the Wells library so it shall be a new experience for both the archive and me.

Here I am working on the Edward and Naomi Feil Collection: 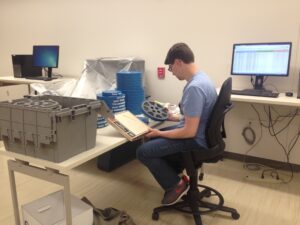 I have been assigned to the Edward and Naomi Feil Collection while I’m here. Edward Feil created Edward Feil Productions in 1952 and continued to make films into the 1990s.  From the more than three hundred film reels we have already inventoried here at Indiana University Libraries’ Moving Image Archive, we can tell you that Ed has made films for multiple industries since the creation of his production company. These industries include the surgical field, mechanical engineering, dental, nursing, the librarian field, fashion, art, gerontology, and municipal development.

Edward Feil Productions was based out of Cleveland, Ohio and towards the late 1960s Ed’s wife, Naomi, was involved in the filmmaking process. She researched, wrote scripts, starred in, filed the copyrights and later went on to edit some of Ed’s films. Though the collection is far from being completely processed, from what we already know, Naomi‘s involvement helped shape the direction that Edward Feil Productions would move in as time moved on.

Naomi Feil is a social worker who is still active today and helping people all over the world. In fact, that seems to have been the mission of Edward Feil Productions, help people. Naomi developed a method to communicate with people who have Alzheimer’s disease called The Validation Method. This led to many successes for the Feils and a number of the films that Ed created for his company involve Naomi using the Validation Method on elderly patients.