Last week I alluded to the fact that Ed Feil was not your average filmmaker. He put great care into every production he made for Edward Feil Productions and the same went for his home movies. As early as 1939, Ed was making his own productions at home on 8mm, editing them and creating his own title cards. By the time Edward Feil Productions began in 1952, with the production materials at his disposal, he was shooting all of his home movies with his family and friends on 16mm film. By the 1970s, with his clap board in hand, he was recording sync sound on magnetic track at family gatherings.

In the 1950s and 1960s, Ed and his family traveled all over the world and by the looks of it, filmed everything. Here at the Indiana University Libraries’ Moving Image Archive we have in our possession hundreds of feet from many exotic places: Paris in 1945, Vienna in 1946, Mardi Gras/Miami in 1954, Las Vegas in 1956, Hong Kong/Rangoon/India/Afghanistan in 1956, Milan/Venice Florence/Rome/Capri/Switzerland in 1959, the Bahamas and Denmark in 1963, both New York World’s Fair 1939/1964, Mexico in 1967, Bermuda in 1969, New York and Puerto Rico in 1972, and Disneyland in 1970/1979. All in color. This doesn’t even include the countless family events that Ed has filmed over the years, some have a matching magnetic track.

Based on our in-progress work on the Feil’s films, home movies make up roughly 15% of the Feil Collection. Truth be told, we have only just started to inventory this collection and these are the gems we have uncovered.  I consider myself incredibly lucky to have the ability to work on such an exciting collection to work on.  Not only does this collection contain industrial films that span many decades and multiple professional fields but well-crafted home movies too.  We aren’t talking about disparate, 100-foot reels of 16mm home movie footage. Ed had the foresight to splice together all of the reels from a given trip in chronological order, number the reels and sometimes insert titles card for changes in destinations such as this one seen below: 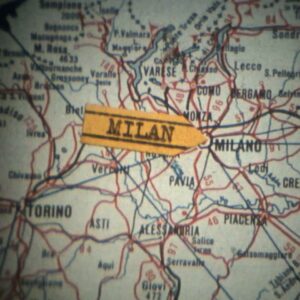 In the case of this still taken from Ed’s time in Italy in 1959, Ed shot a few hundred feet of each destination he went to within Italy: Milan, Venice, Florence, etc. and then with the extra shots he had left over, he edited together a travelogue. This was not the first time he did this. We also possess an edited travelogue of Ed’s time in Asia in 1956. In that case, pieces of leader with the change of country are supplied in between each 100-foot reel of Kodachrome. He hadn’t yet elevated his home movies to the production level of his Italy trip.  By the late 1950s and into the 1970s, Feil home movies all retained a similar form. The first reel of every trip begins with the family getting on a plane, a shot of the pilot in the cockpit, the takeoff, the landing. The last reel of the every trip ends as same way, with the Feils once again getting on a plane headed for home, a shot of the cockpit, etc.  Every trip spliced together in sequence for our viewing pleasure. Here are some quick pictures I snapped with my iPhone from our Steenbeck: 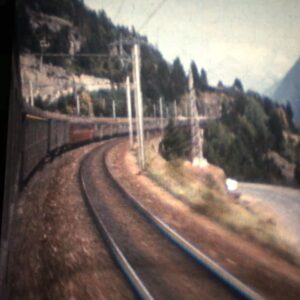 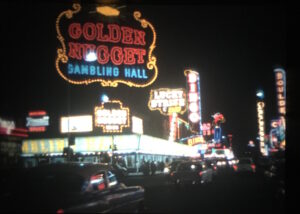 Next week we will take a look at more of Ed’s home movies and how the inventorying of this collection has led to Indiana University Libraries’ Moving Image Archive assisting the Library of Congress in research for a restoration they are working on.