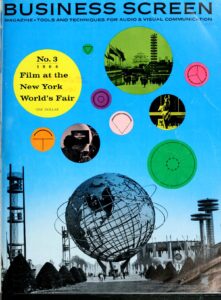 Issue of Business Screen magazine on films at the World’s Fair found in the Feil Collection.

Last week I mentioned that the research we are doing on the Edward and Naomi Feil Collection here at Indiana University Libraries’ Moving Image Archive has lead to the discovery of something very unique within their home movies.  First, a short back story; as a graduate student of NYU’s Moving Image Archiving and Preservation program, I had the opportunity to visit the Library of Congress Packard Campus for Audio-Visual Conservation in Culpeper, Virginia back in February. On the last day of our five-day tour of the campus, my cohort and I were treated to a screening of a restoration of a very unique film that debuted at the 1964 World’s Fair in New York, Think. The film was created by the famous designers and artists Charles and Ray Eames for IBM’s pavilion at the World’s Fair. It was exhibited on nine screens in the same theatre. There are two versions of Think, the 1964 version and the 1965 version. We saw the 1965 version in February and it’s a film you don’t forget. The 1964 version has been difficult to reconstruct due to the fact that no record exists of how it was exhibited. 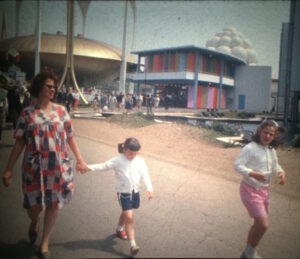 Within the home movies of Edward and Naomi Feil exists footage from the 1964 World’s Fair. Ed never put his camera down and that included when he went into the theatre to watch Think. Thanks to Ed’s penchant for filming everything we now have three minutes of the 1964 version of Think as it was shown in the theater. Ed Feil spliced all the reels he shot from the World’s Fair in sequence as he did with every trip he went on. I noticed the footage right away when I was inspecting the reel because the Ektachrome color reversal at the start of the reel changed to a black and white Kodak stock. I would bet my life on it that Ed knew about the film being shown at the World’s Fair and intended to shoot footage of the film as an eternal lover of cinema.  As evident when watching the entire reel, the black and white portion in between the rest of the Ektachrome had a much higher ISO.  Ed changed the film in his camera while he was still in the theater, films another thirty seconds or so on the Ektachrome reversal and Think becomes muddled due to the lower ISO.

As soon as I noticed this unique footage, I contacted George Willeman, the Nitrate Vault Manager at the Packard Center and he exclaimed that “the big deal with this home movie is that it is (far as we know) the only footage of the 1964 version of Think. He also went on to say that this home movie “is going to make us re-think our restoration!” I am beyond thrilled that the work we are doing here at Indiana University Libraries’ Moving Image Archive is leading to exciting and pivotal discoveries such as this. 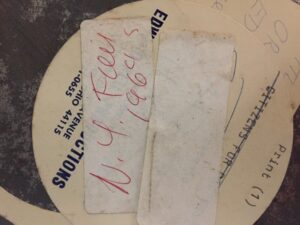 Original label on the can the “Think” footage was found in.

Lastly but not less important was the discovery of what may be the most endearing home movie ever filmed by any person ever. Ed and Naomi Feil got married in 1963 and went on their honeymoon to the Bahamas. Much like his official productions, Ed went into this with a vision and edited together the most beautiful cinematic love letter to Naomi. Ed saw no line separating his official productions and his home movies. Ed composed this film the same way we composed the rest of his productions and set the film to music.  I cannot wait to make this accessible to you all one day. As evidenced by my blog posts there are many exciting things to come with the Edward and Naomi Feil Collection. 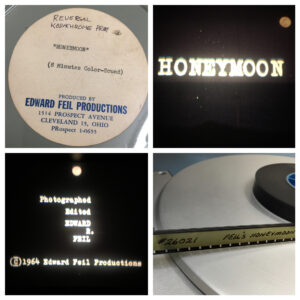 Original can, screen shots and tail of “Honeymoon.”