As I have mentioned in my previous blog posts, my summer has consisted of inventorying and researching the Edward and Naomi Feil Collection here at Indiana University Libraries’ Moving Image Archive. Just last week, I moved from inventorying the films to wading through the papers in the collection. At first, combing through the papers didn’t seem that enticing of a task because inventorying the films had proven to be such a fascinating and moving experience for me not only as a media archivist but as a human. I have been given the chance to examine the artistic process of a filmmaker whose passion burned so hot with his love for cinema that even his home life seemed like a film set. He could even make something like a cashmere factory look cinematic.

That being said, I moved onto the papers anyway and I was proven wrong. The papers gave me an even more detailed look into the world of Edward and Naomi Feil. Ed kept many interesting things that will ultimately prove to be equally as beneficial in understanding why he became a filmmaker and how he made his films. He also kept some of the correspondences he had with academic institutions who were interested in either purchasing or renting his educational films. This proved to be quite serendipitous for us here at Indiana University Libraries’ Moving Image Archive because some of these correspondences connected Edward Feil directly to Indiana University’s Division of Library Science in 1956. Below in chronological order are the correspondences between Carolyn Guss who was the Associate in Selection, Audio Visual Center, LaVern Walther, an assistant professor within the Divison of Library Science and of course, Ed Feil. 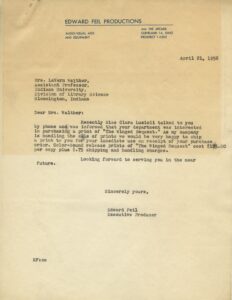 On April 21st, 1956, Ed wrote to Lavern Walther explaining that he had been informed by phone that the Division of Library Services here at Indiana University was interested in purchasing a print of a film made about libraries, The Winged Bequest. This film centers around the services libraries can offer to help the handicapped and those who could not leave their homes to go the library.

Six months later on October 11th, Carolyn Guss wrote Ed Feil wondering if he could send the library a copy of the film to preview at no extra cost: 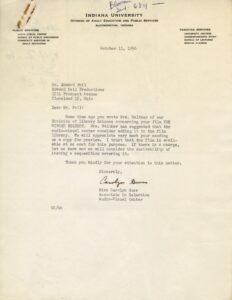 Eleven days after that on October 22nd, Ed proceeded to send Carolyn Guss an audition print of The Winged Bequest for preview: 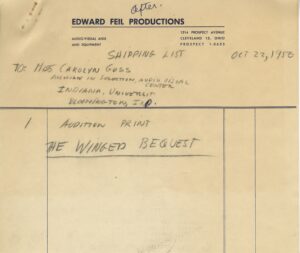 On November 20th, Carolyn sent Ed a telegram to inform him that the print was being returned and that the library had to delay their purchase since the decision was still pending: 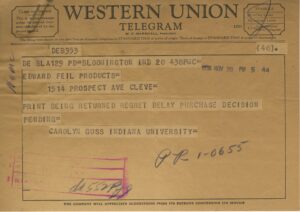 Upon reading the telegram, I was saddened by the response from Carloyn Guss knowing that The Winged Bequest was and still is a film that speaks for the handicapped and the wonderful services libraries can offer for them. Then I realized that even though the final correspondence between Carolyn and Ed seemed to be missing, I could check IUCat and see if the film was in the audio-visual collection here at Indiana University. There it was! We had the answer all along! 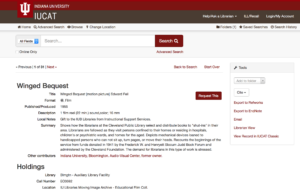