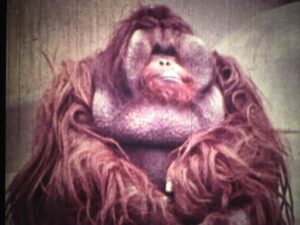 This orangutan sympathizes with your post-summer blues

Those of us at the IU Libraries’ Moving Image Archive know the feeling,the past few summer months saw your unbridled sense of freedom, your unabashed delight as you frolicked free from classrooms and quizzes. But now school is back in session and you’ve got to tame your wild spirit. Well fret not, the first Social Guidance Sunday of Fall 2016 will have your tail wagging and your whiskers twitching with fun educational films about animals!

That’s right, the cat’s out of the bag, this month’s set of 16mm films is a medley of animals and genres. Starting out with some important lessons that are applicable to animals and humans, we have included films that will help you navigate conversations with all sorts of species.

First up we meet Skipper, a dog who expresses some racist tendencies – lame! But have no fear, as a 1952 educational film, Skipper has become a social media pariah among film archivists on social media – hey, we have to have somethingto get excited about!

Before there was Grumpy Cat, we had Tommy Cat (1974, 8 min). Tommy Cat doesn’t like being a cat anymore and wants to try out a new species for a change.

Tommy Cat (1974) on a mission to reinvent himself

Created by Moreland-Latchford Productions, a Canadian film company, this is part of a double-ending animal film series. These films – with titles like Tubby Bunny and Tuffy Puppy – were created to help primary school children consider the implications of decisions and how each ending would impact the story.

If you think communication among animals can get tricky, just think about how human scientists try to do it! Wild Science: Communicating with Animals (1976, 11 min) illustrates two successful experiments involving communication between human researchers and animal species. There’s Morgan the pilot whale to the rescue if we needed a torpedo retrieved and disarmed and then there is Lana the chimpanzee who can communicate intelligently but gets a little existential at times.

Like humans, animals can be very competitive. Especially when it concerns their children! In Farmyard Babies (1978, 7 min), we meet Molly the farm dog, tasked by the farm animals to check up on all of the new baby animals and decide who has the cutest offspring. I won’t spoil anything but I’ll warn you that Molly may be a bit biased (not like Skipper, though!).

When you’ve visited a zoo, do you ever feel like the animals are watching you? A Zoo’s Eye View: Dawn Til Dark (1973, 10 min) proves that in fact, they are. What can we say, you are some fascinating creatures! There are plenty of classroom films featuring zoos and some can be very upsetting but this film makes you remember a day at the zoo fondly.

In a more melancholic nostalgic note, the penultimate film provides a non-narrated meditation. Not your typical educational classroom film, Scatsophrenia (1976, 11 min) provides a cat’s eye view of the city at night and a daydream of being a wild tiger. Combining several musical influences from John Lennon to jazz, this film may resonate with your more animal side.

We conclude “Animal Sense” with a black and white film from 1932 called Under the Sea. If you are familiar with nature documentaries, especially Jean Painlevé’s work, you may recognize this kind of style. Admittedly, an older, black and white film may not be a barn-raising hoot, but before you go to the water trough, listen up for a soundtrack composed specially for this film. This musical accompaniment will be performed by Andrew Slater.

As you can see, we’ve packed the program with some strange, silly, sensory-exciting films featuring our furry, slippery, smart animal friends. Come hang out and play Bingo based on these films!

Please consider bringing a donation for My Dog is My Home Service Day! On November 6th from 9AM-noon in Seminary Square, there will be services for homeless people and their animals – veterinary check-ups, grooming, etc. Please bring food, toys, and other care supplies!