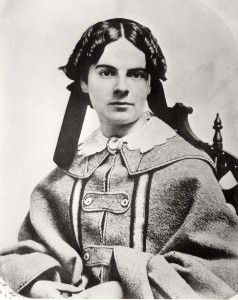 Morrison’s parents, John and Catherine, were themselves well-educated. John graduated from Miami University in Ohio in 1828, at which time he returned to his hometown Salem, Indiana and opened the Washington County Seminary. At the Seminary John was in charge of Catherine Morris’ education for six years. In 1830, Catherine’s parents sent her to the Quaker-run Westtown Boarding School near Philadelphia, where she studied for two years. Upon her return to Salem, John proposed to Catherine and they were married September 11, 1832. Their first child, Sarah, was born in 1833.

In addition to the Washington County Seminary, John and Catherine worked together to open the Salem Female Seminary in 1835. Instead of hiring the customary male teaching assistants, they employed young female teachers from the East, a rarity in this time.

After a considerable amount of home schooling, Catherine decided it was time for her daughter Sarah to receive more formal training. Sarah attended Mount Holyoke Seminary, graduating from that institution in 1857. She went on to Vassar College, where she was a pupil-teacher and later to Williams College to do post-graduate work.

After studying at Williams, Sarah returned home to Salem. While preparing to attend the 1867 Indiana University commencement, Sarah’s father, formerly president of the IU Board of Trustees and now Treasurer of the State, remarked to Sarah that it was time for the University to open its doors to women and offered Sarah $5 to prepare an appeal to the Board of Trustees.

This Sarah did, and the Trustees found nothing in the University’s charter that barred women from entering the University. They declared women could enter under the same terms as men. Sarah, at 34 years of age and years of education behind her, had no desire to attend Indiana University and hoped some other woman would step forward. To her disappointment, no young woman did, so Sarah entered as a freshman in the fall of 1867.

It was the fashion then to wear large sun hats, with a rather broad ribbon going over the crown and tied under the chin. The young men were not dangerous to me nor I to them, but I was thankful for the protection that hat afforded me from six hundred eyes presumably furtively ‘casting a sly glance at me’.

Sarah completed the four year program in two years, graduating in 1869. Four years after her graduation, Sarah was appointed tutor and in 1874 she became IU’s first female faculty member when she was named adjunct professor of English literature. Despite Sarah’s success as a student, the male students did not readily accept her as their superior. She only stayed at IU for one more year, at which time she left for other pursuits.

Sarah Parke Morrison died in 1919 and is buried in Indianapolis.

The Archives holds a small collection of Sarah’s papers, which includes, among other things, a handwritten account of her entrance to IU as well as the frequent letters written to university administrators admonishing the lack of female representation among its ranks. 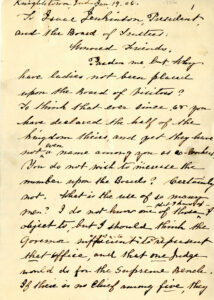 To Isaac Jenkinson, President and the Board of Trustees:

Pardon me, but why have ladies not been placed upon the Board of Visitors? To think that ever since 68 you have declared the half of the kingdom theirs, and yet they have not even a name among you as co-workers. You do not wish to increase the number upon the Boards? Certainly not. What is the use of so many men?

Click here to read her letter in its entirety: Morrison