Hello again. Interning in the archives this week has been relatively less busy from previous weeks, but of course there is always something interesting going on here. Having finished W.T.K. Nugent’s publications series, I moved on to his academic life series, since that ties in directly to his time at Indiana University. So far it’s mainly been a process of sorting through correspondence dealing (mostly) with colleagues and publishers, though I have found a few sensitive materials such as loan forms, and some less important items like television receipts. This series will be restricted to patrons for awhile, for a couple of reasons: Nugent specifically marked the boxes out for restriction, and as archivists we must follow the donor’s wishes; and although these materials are around four decades old, they still deal with people – and their families – who are alive and perhaps do not know we have their correspondence with Nugent, and it is advisable to keep this kind of information restricted for privacy reasons. Researchers, don’t despair. If you’d like to research Nugent’s correspondence from his time as an IU professor, this series should be entirely open in 2035 (as per Nugent’s wish).

Privacy and sensitivity is a daily issue in archives, especially when dealing with personal papers and correspondence. Some donors may not care if their personal correspondence can be read by researchers forty years later, but some donors want to keep that information private for as long as possible. It’s a personal preference, and archivists should learn some PR skills in dealing with donors. As I learned in my internship readings, if archivists can explain their typical restrictions on files, some donors can be persuaded not to keep their files closed forever. There is no point in preserving papers indefinitely if they can never be accessed and used by researchers. Having said that, Nugent’s collection has typical restrictions on correspondence, financial information, and personal information. This is fair, since researchers are more likely to want his professional information.

Sorting through Nugent’s professional correspondence has allowed me to get a better indication of how he worked, both with his publications and with his colleagues in his department. Though the majority of the series so far is made up of letters, notes, and memos, there are the occasional objects that make the job more interesting, such as air mail letters, postcards, and the occasional receipt. Once again it is proven that you can find almost anything in the archives. Earlier this week I happened upon this drawing, mixed in with meeting notes and agendas: 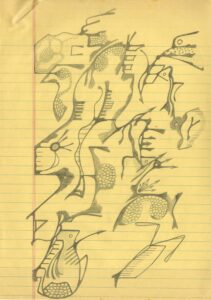 "Indiana Triumphs Over the Forces of Evil"

This appears to be an inspired New Mexican-influenced drawing. At first I thought Nugent had a talent never before displayed, but turning over this drawing I found this:

The abstract image was drawn by one of Nugent’s colleagues in 1975, curiously titled “Indiana Triumphs over the Forces of Evil.” I would love to know the story behind this drawing, but unfortunately there is no mention made of it anywhere other than the date Nugent collected it. This is one of the few mysteries in Nugent’s collection. I hope I can find more information about this particular piece of paper.