But alas, in this land, children are not always trained the way they should go. Still we welcome them with hope — we spurn none away without trial, even the surly and self-willed youth. We throw around him arms of love, pour into his ears the voice of entreaty, and bedew his cheeks with the tears of fraternal sympathy. – Indiana University President William M. Daily, 1856

For nearly 150 years, Indiana University managed students under in loco parentis – “in the place of a parent”. Discipline was to be meted out with a paternal, not punitive, hand. Rules regarding housing and social activities were plentiful and were to be followed. In general, there were more regulations guiding the lives of the coeds than for the male student population. 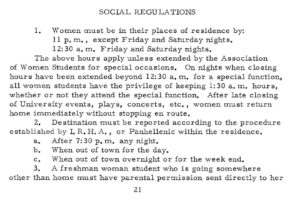 For many years, women could only participate in social functions on university property unless approved by the Social Affairs Committee; freshman women who held jobs requiring them to work 4 or more hours a day were not allowed to enroll for more than 10 credit hours without permission; and one we frequently hear about from alums — women’s hours. Unless previously approved, women had to be in their residence by a certain time because doors were locked. If they weren’t in by that time, they had to find a collaborator within the sorority or residence hall to stealthily sneak them in; otherwise, they had better be adept at climbing into a window!

The changing landscape of the 1960s brought an end to in loco parentis at Indiana University; women’s hours were discontinued, open visitation was ratified, and students were no longer required to live in university-approved housing.

After a considerable amount of work by student leaders, open visitation was approved by the Board of Trustees in 1968. Open visitation, or open guest privileges, meant three days a week, residents of university housing could have visitors of the opposite sex in their rooms if two-thirds of the residents in a given housing unit approved, determined via secret ballot. This change in university policy brought a firestorm of criticism from Indiana lawmakers, citizens, and, not surprisingly, parents.

60% of parents surveyed were against open visitation.

IU’s new president, Joseph Sutton, prepared a letter for critics, stating, “Other state universities have instituted such a policy without public objection and I am puzzled why Indiana residents are so distrustful of their youth. Surely training in Indiana homes is just as effective as elsewhere.”

Despite the backlash, open guest hours remained in place and expanded for those who requested it. Although availability dwindled in numbers over the years, closed visitation housing remained an option for students until recent years, even if it was just a floor within a larger housing unit. 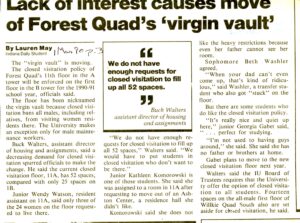 I know I am not doing this subject justice, but truly, one could write a book about student regulations at IU! If you are interested in researching this topic, let us know! We have extensive clippings files, student handbooks, university administrative records, as well as the records of student and faculty groups that could prove valuable.