The finding aid for the American Association of University Women, Bloomington Branch records has been updated with new materials!  Founded on February 12, 1913, the AAUW, Bloomington Branch (then called the Association of Collegiate Alumnae) worked to fight prejudices against women in higher education and in the workplace.  It also helped fund scholarships and fellowships for women to conduct research and pursue advanced degrees.

Today, the A.A.U.W. has around 150,000 members and 1,500 branches around the country.  The organization remains very active, frequently endorsing legislation promoting women’s rights in higher education and beyond. 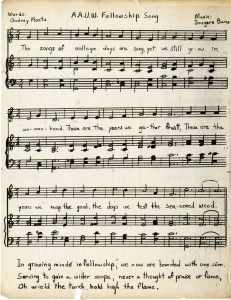 New additions include meeting minutes between 1927 and 1954, as well as numerous newspaper articles which highlight the many issues with which the A.A.U.W., Bloomington Branch was involved, including women’s rights, education, and politics.

The branch was active in raising money for the national A.A.U.W. Fellowship fund.  They also frequently formed committees and hosted guest speakers to address a wide range of important issues such as women in public office (1948) and the “denazification” of Germany after World War II (1946).  Notable speakers include Dr. Kathryn McHale, national general director of the American Association of University Women in Washington, D.C. (ca. 1936), and Dr. Margaret E. Morgan, Mental Health Commissioner of Indiana (1956).

The AAUW, Bloomington Branch was also host to many students who came to study in the United States through AAUW fellowships, including Laura De Arce of Uruguay in 1939.  She was the first woman from Uruguay to receive the American Association of University Women Latin-American fellowship and studied at Indiana Univesity in 1939.

For further information on the collection, contact the Archives!