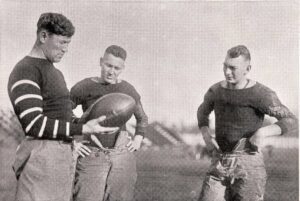 I recently caught the documentary “Jim Thorpe, The World’s Greatest Athlete” on WFIU. I love documentaries and this one is worth a watch. But unless I missed it, they never mentioned the time this legend spent at Indiana University!

If you do not know the story, Thorpe, a Native American, began his athletic career at Pennsylvania’s Carlisle Indian Industrial School in 1907 where he played baseball, football, and was a member of the track team. He excelled in football and under the tutelage of Glen Scobey “Pop” Warner, Thorpe became a star on the Carlisle team. Before long the small school was winning against the likes of Harvard and Yale.

In 1912, Thorpe went to Stockholm as a member of the American Olympic track team. There he smashed previously held records, winning gold medals for the pentathlon and decathlon. He came home with $50,000 in trophies, including a chalice in the shape of a Viking ship presented to him by the Czar of Russia. Sadly, within a month, the Olympic Committee stripped him of his hard won medals, as it was learned that he had been paid a small sum for playing summer baseball – Jim Thorpe, they decided, was no amateur athlete.

This hardly meant an end to his sports career – quite the opposite, in fact. In 1913, he signed a contract to play baseball with the New York Giants, and went on to also play for the Chicago Cardinals and Canton (Ohio) Bulldogs. In 1920, he was elected president of the American Professional Football Association, the forerunner of today’s NFL.

Clearly, this guy was a big deal.

So where’s the IU connection?

Well, in 1914 IU hired C.C. Childs as its head football coach. In seeking out additional coaching staff, Childs considered — and passed over — job-seeker Knute Rockne (some of you may have heard of him) and remembered his fellow Olympic team member Thorpe. Thorpe was wrapping up a season with the Giants and he looked with interest at the opportunity to return to football. To assist with IU’s 1915 football season, he asked for $1000 plus a room for his family at a Bloomington hotel. A deal was struck and the students were thrilled to learn that the World’s Greatest Athlete would be joining the coaching staff. Sadly, his addition to the staff did not help lead the Hoosiers to glory that season. They finished with one victory, over Northwestern, and tied with Washington and Lee. Despite the poor record, Thorpe was welcomed as a hero on the campus and in the Bloomington community.

Thorpe left Bloomington to continue his professional athletic career in baseball and football. Throughout his life, Thorpe struggled with alcoholism and after retiring as a player, he found himself moving from job to job. When he died of a heart attack in 1953, he was penniless. Thorpe, however, would be long remembered for his athletic prowess. In 1983, the International Olympic Committee restored his Olympic medals and in 1999, Senator Rick Santorum sponsored a U.S. Senate resolution to name him Athlete of the Century.