In the last few weeks of my internship, I have been working hard to finish W.T.K. Nugent’s collection. Though I end each day with piles of xeroxed articles to toss in the recycling bin, the number of boxes never seems to get any smaller. The academic life series of papers has been finished and I am now working through the many speeches given by Dr. Nugent over the course of 40 years in academia. The content is quite interesting – Dr. Nugent traveled all over this hemisphere to talk, to places that include Germany, Israel, Ireland, and England. He mainly spoke on his areas of expertise, which are the West and demographic history, but he also branched out a bit occasionally. One speech given was titled “What Would You Do If You Were 20 and Living in Indianapolis in 1849?” (The answer: Farm.)

Continuing the streak of finding random objects hidden in the folders of this collection, today I stumbled on a piece of blue agate rock, hand-picked by Nebraska’s governor in the 1960s. It’s a pretty little rock. I wish I had a reason to archive it along with the academic appointment letters I found with it, but sadly I do not, so back to Dr. Nugent it goes. A few pages later in this folder I ran across a program for a birthday celebration in 1966 for President Harry S. Truman, which is not something one sees every day so I flipped it open and found this: 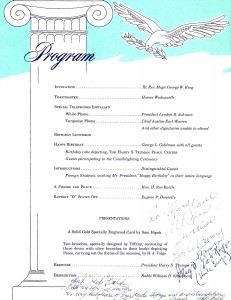 If it looks like a program with a bunch of scribbles in the corner, well, that’s what it is. However, when you take a closer look:

Amid the other signatures, you can make out “Harry S. Truman” – conveniently, next to Truman’s name on the program. This is definitely not something you see every day, so I got a little excited. Then I remembered that there is no proof that this is really a signature from Truman himself, nor are the other signatures written out to Dr. Nugent. I’m not sure why this is in the collection, and it will take some detective work to prove that this is the real deal, but in the meantime it’s still pretty interesting.

Satisfied with my find, I continued processing the folder, but a few pages after I found a browned invitation: 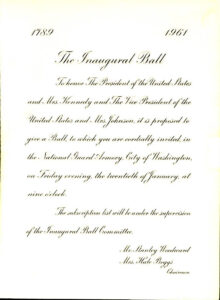 This appears to be an invitation to President John F. Kennedy’s inaugural ball. Fresh off of the Truman find, my excitement also had to be quashed as there is no explanation for this being in Dr. Nugent’s folder nor is there evidence that it’s authentic. Still… it’s a pretty exciting thing to see. These kind of papers would usually be on display at a presidential library or history museum, yet here they are scattered into the papers of a former IU professor. It is not absurd to assume that Dr. Nugent attended both these events, but that is as yet to be determined.