The finding aid for the Indiana University Department of Theatre and Drama records is now available online!  A portion of the collection was processed in 2007, however I had the pleasure of integrating two substantial additional accessions of related material in 2010 and tied everything together with revised descriptive information. 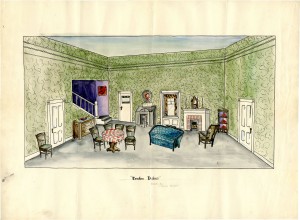 I know, I know: enough with the archival jargon.  (Sometimes I just can’t help myself!)  What exactly is in this collection, you ask?  Well, it’s an exciting mix of materials documenting the Indiana University Department of Theatre and Drama from 1925-2007.  It does not merely include administrative and course records, but also a plethora of visually captivating programs, newspaper reviews, scripts, posters, and performance photographs documenting theatre productions in association with the University Theatre, Brown County Playhouse, Indiana Theatre Company, and I.U. Theatre Circle.  Overall, the collection provides a rich history of dramatic expression and theatrical training at Indiana University, which attests to the maturation of the department and associated performance initiatives. 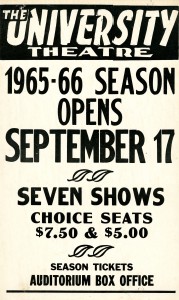 My favorite aspect of processing this collection was working with the Production Files series, which includes more than twenty boxes of materials documenting various stage productions, both time honored classics and modern productions.  It was incredibly interesting to see the gradual stylistic and topical changes apparent in performances over the course of more than seven decades.  The events and movements taking place in the world at large were often reflected on the stage, including relatively barren set designs during the Great Depression era, lavish productions typifying the 1950s post-war America period, and creatively stylized performances dealing with race and gender issues in the 1960s-1970s.  Even the evolution of poster and program designs within the collection lends an interesting component to understanding artistic expression and the role of drama on campus over time. 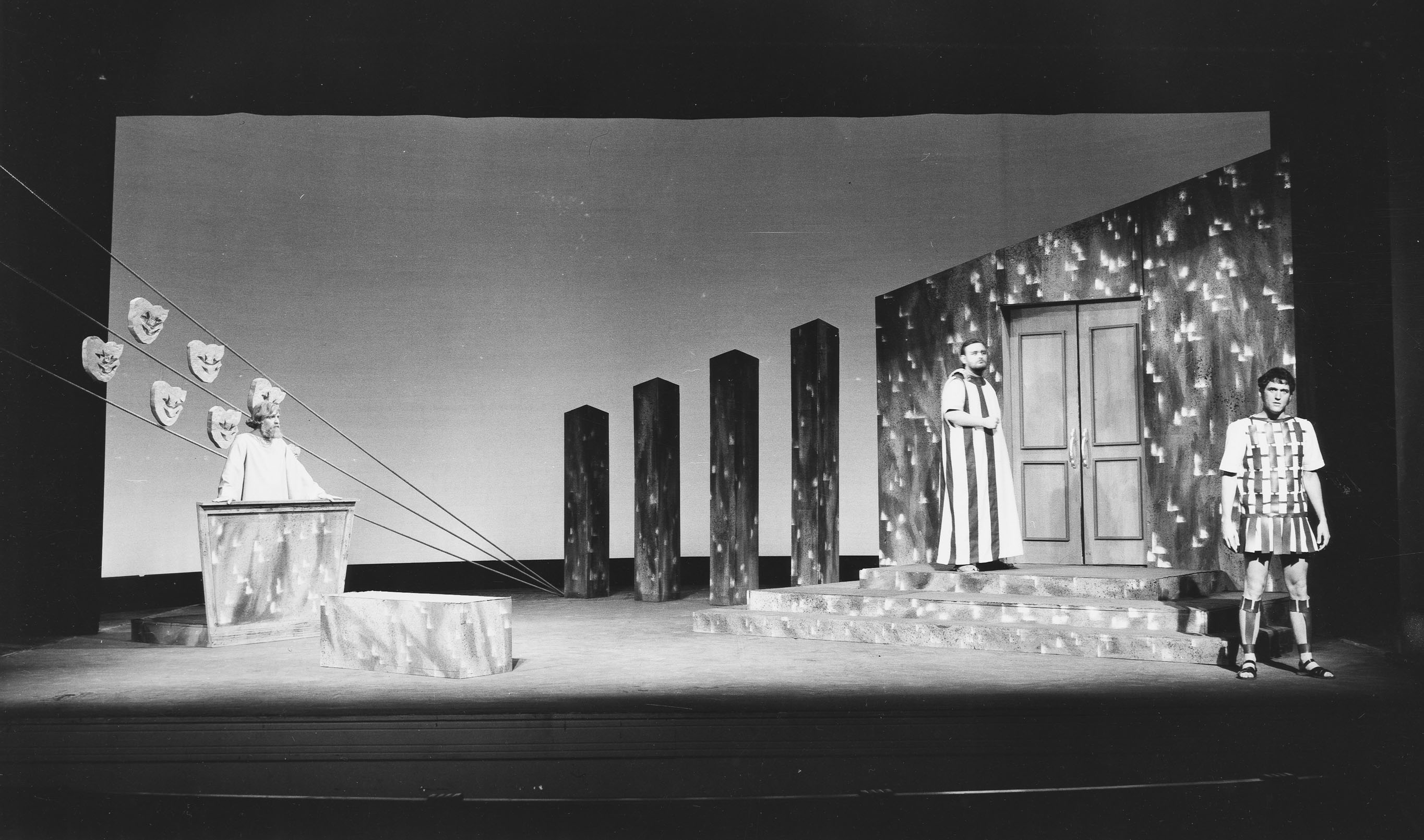 "Antigone," as performed in 1969 by the Indiana Theatre Company--a regional touring performance group which included Indiana University Department of Theatre and Drama students.

Materials which originated from the Brown County Playhouse, with which IU had a partnership from 1949-2010, offer a wealth of documentation on the origins and development of this unique cultural offering highly popular with South Central Indiana locals and visitors alike.  The Brown 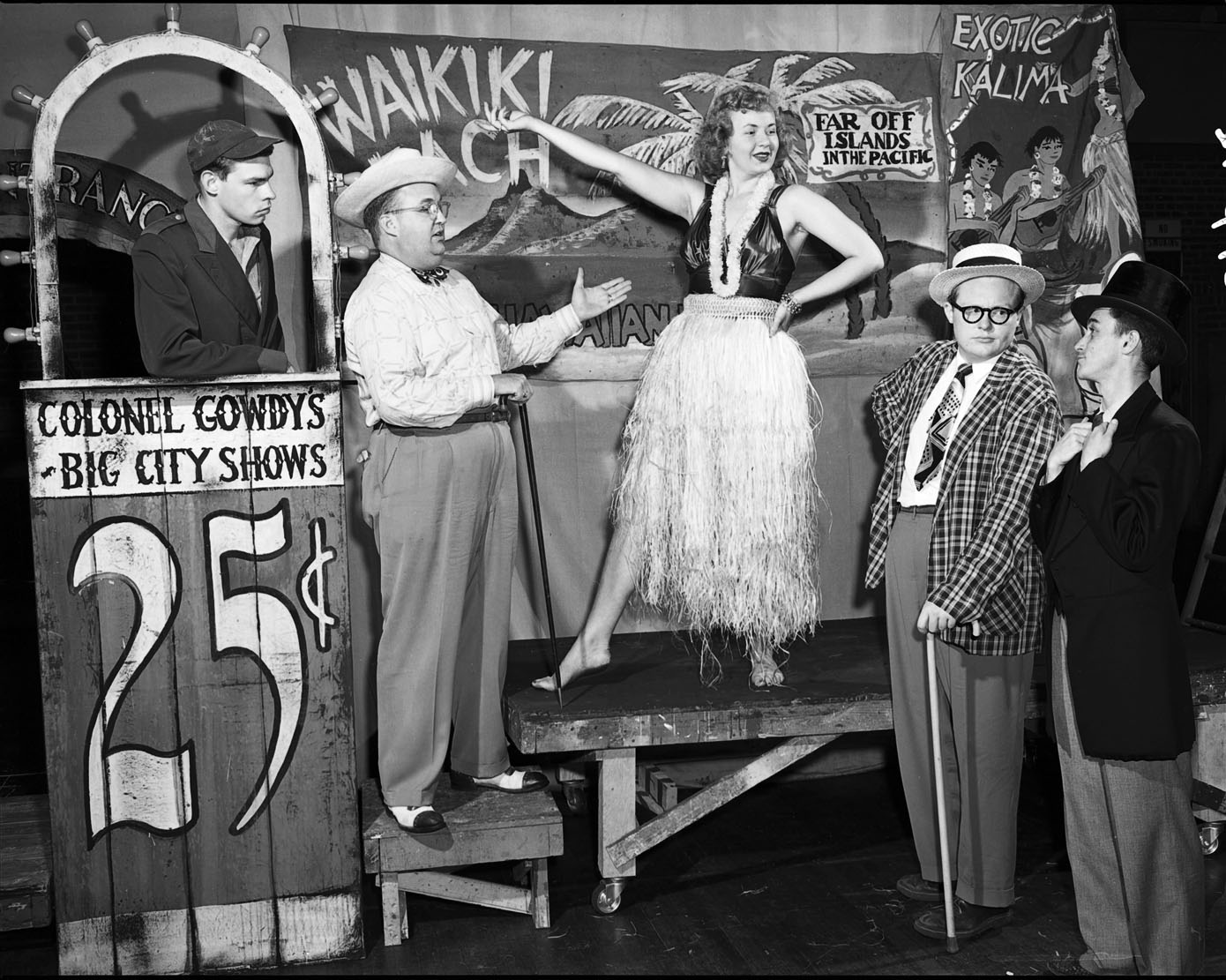 Performance photograph of "The Barker," as performed at the Brown County Playhouse, 1951.

County Playhouse began as a rudimentary stage constructed in a barn with an adjoining tent covering the otherwise outdoor audience space, though a more solid, rain resistant structure was built in 1977 to accommodate a growing audience base.  It operated as a summer theatre, and specialized in comedic plays.  Performance programs exhibit the theatre’s unique, laid-back style, while many newspaper clippings attest to the popular success of the venue and actors’ prowess. The Playhouse closed its doors for good at the end of the 2010 season.

Some other specific highlights that may be of interest to researchers, alumni, student actors, and casual theatre fanatics include materials documenting the 1941 world premier of Pulitzer Prize-winning playwright William Saroyan’s Jim Dandy at the then newly opened Indiana University Auditorium and evidence of one of the IU Theatre and Drama Department’s most highly celebrated alumni, Kevin Kline, in 1960s era performances such as Wingless Victory.  Many more treasures lie in waiting within the collection!

[Note: Additional photographs related to performances in the collection may also be available through the IU Archives Photographs Collection.  Don’t hesitate to ask!]