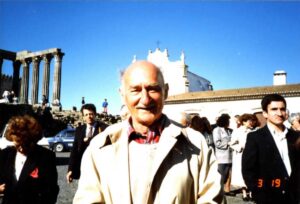 It’s been about a month or so since I began working on the Henry H. H. Remak collection. During that time I’ve done a cursory examination of just under 40 boxes of documents that were taken from Professor Remak’s office, and I have about 60 more to go. In my last post on former Professor Remak I gave you a brief glimpse into his life story, and like so many others before me, I praised the love and care he had for his students. He cared for them not only as students but as individuals, a fact evidenced by the first two requirements that he gave to each and every one of them. First, each student had to turn in a detailed autobiography, and its worth noting that Professor Remak kept, if not all, many of these student biographies. Second, each student was to visit Henry Remak in his office at the beginning of the semester. The point of this was not to put his students on the spot, but rather to get to know each one of them as a person with unique interests and intellectual needs.

In one of Remak’s papers written for the Collins Living-Learning Center, a residential program on the IU campus that promotes academic exploration for undergraduates, Remak expressed frustration over an incident he had with “a bright student.” Professor Remak recommended a worthwhile, intellectually stimulating German film to this intelligent young man. In response, the young man stated that while he would like to see the film, unfortunately his friends would not be into that type of movie. Remak’s response to this encounter was to feel sadness, “sadness because (the young man) was falsifying his nature in order to maintain group acceptance.” In the essay, Remak goes onto to state that good grades are incomplete without “lively, self-motivated thinkers and doers with enough imagination and spontaneity to take chances…” Remak valued these qualities in his students, and I believe that he also valued them in himself, which is evidenced in the following example. 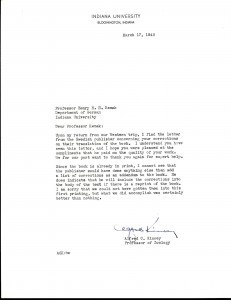 I’ve come across almost an entire box full of Kinsey Institute files that reflect Remak’s dedication and willingness to assist, promote and often defend the Institute. From the very start of Dr. Alfred Kinsey’s work on human sexuality, Henry H. H. Remak gave his full support, despite the often vehement disapproval that the Institute has received from some camps since Dr. Kinsey began his research. As a student, Remak was one of the earliest contributors to Kinsey’s sex history files in the late 1930s, which essentially instigated a life-long admiration for Dr. Kinsey, as well as a professional relationship between the two men. A little over a decade later, when Remak had only just begun his career at IU, Remak assisted Dr. Kinsey by correcting translations of his seminal works: Sexual Behavior in the Human Male and Sexual Behavior in the Human Female. In the late 1990s and early 2000s, Remak actively supported the Kinsey Institute once again by serving on the Friends of Kinsey Board of Directors.

Much later when Dr. Remak was Vice Cancellor and Dean of the Faculties, he wrote a long letter to Cornelia Christenson, author of the 1971 book Kinsey: A Biography. In it Dr. Remak praises Christenson for her “authorial modesty” and “objectivity” but he does have one or two small criticisms to make, the most telling of which is in response to her line, “‘He was perhaps not a great man.” Remak adamantly disagrees, claiming that “there was never any doubt in my mind, from my earliest contacts with him. . . that he was indeed a great man, I would have to say the greatest I have known in fair proximity.” Remak goes on to state that Dr. Kinsey had a profound influence on his own research, despite their differing fields of study. Additionally, in an article entitled “Courage as a rare commodity,” written for the February 26, 1999 issue of IU Home Pages, Remak would list Dr. Kinsey as among his heroes along with Eleanor Roosevelt, Herman B Wells and Ralph F. Fuchs.

To conclude my second blog post regarding the Henry H. H. Remak collection, I will simply say that through his intentions and actions, the late Dr. Remak seems to have possessed as much integrity and “modern heroism” as those that he so deeply admired.