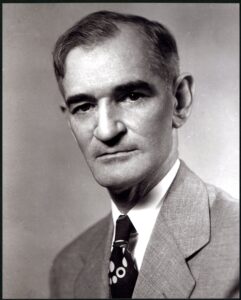 Dr. Hale spent nearly his entire career working as a civilian scientist at the U.S. Army Ordnance Picatinny Arsenal in Dover, NJ.  He was involved in many of the major accomplishments of the Picatinny Arsenal in the period between World War I and World War II, including the development of cyclonite (also known as RDX), an explosive that eventually went on to largely replace TNT in military ordnance.  He was also credited for the creation of a new explosive compound, Haleite, which was named in his honor.  In addition, he held numerous patents for other explosives, powders, and propellants.

In recognition of Dr. Hale’s life and accomplishments, the Picatinny Arsenal named a laboratory in his honor.  The George C. Hale Building opened in 1962.

The collection, though small, contains a wealth of interesting information regarding Dr. Hale’s life and work.  There are numerous biographical materials, including newspaper and magazine articles on Dr. Hale’s accomplishments and correspondence about his work and research.

Also in the collection are a number of photographs, including some from his time as a student at Indiana University.  The photographs not only provide insight into Dr. Hale’s student days, but also gives a snapshot of IU in the early 20th century.  In particular, a photograph of a young George Hale and his roommate, Dex Neal, shows them standing on a bridge in Dunn’s Woods. We think this may be the only photo we have of this bridge in our collection! 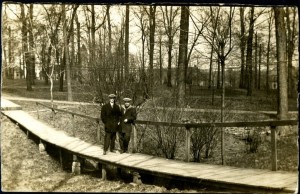 Additions of alumni papers to the Archives are always exciting because we never know what we will find.  Oftentimes they contain unique materials that not only detail the lives of interesting people, but also provides insight into the history of IU.  (And the best way to learn about life at IU is through those who experienced it first-hand!)

If you are an alum (or the family of an alum!) and are looking for a home for scrapbooks, photographs, diaries, correspondence, etc. dating from your student days, please give us a call! We are always on the lookout for materials documenting student life, as it provides a richer picture of the university during a moment in time.