When many people hear the word “archives,” romantic thoughts of decades-old civil war letters, ornate scrapbooks, brittle newspaper clippings, and sepia toned photographs likely spring to mind. However, an archival repository such as the Indiana University Archives, which actively preserves the University’s institutional memory, is also home to relatively contemporary materials documenting history within the memorable past. Such is the case with the recently processed Indiana University Strategic Directions Charter records. 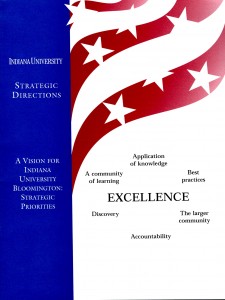 This collection documents an initiative spearheaded by Indiana University’s sixteenth president, Myles Brand, beginning in 1995 in response to acknowledged fundamental changes in the general environment for higher education. The initiative, deemed the Strategic Directions Charter, was founded upon a goal to enact institutional changes and plans which were to sustain Indiana University’s excellence, thus enabling it to emerge as a model for “America’s New Public University.” Though at present such initiatives may merely sound like stale news, for future generations of students, administrators, and institutional historians, this collection will serve to preserve a poignant point of Indiana University’s strategic development into the twenty-first century. 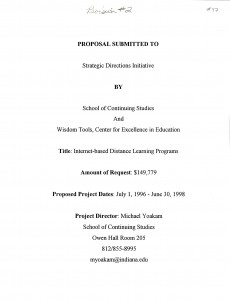 The title page for a proposal aimed at technological advancement, #1996-37, Internet-Based Distance Learning Programs; submitted by Michael Yoakum, Round One, 1996

The archival collection at the IU Archives includes documentation of the Charter’s formation by a diverse steering committee made up of more than 250 Indiana University affiliates. It also includes reports and planning documents created by eight targeted task forces, which honed in on specific genres for improvement such as “Partnerships with the Public and Private Sectors,” “Excellence in Teaching and Research,” and “Minority Attainment/Underrepresentation.” The official charter was widely distributed across Indiana University campuses in January 1996, which served as a call for University faculty panels to create project proposals and solicit University funding for new initiatives or improvements to current programs, particularly those which would help to push Indiana University towards its newly outlined goals. More then 25 million dollars of funding was allocated to proposals accepted over the course of three rounds throughout 1996 and 1997. 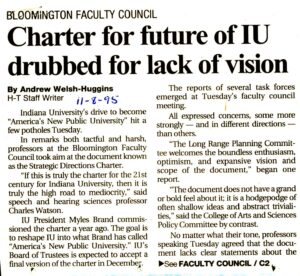 Portion of a newspaper article published in the Herald Times, which offers an antagonistic perspective on the Strategic Directions Charter, as voiced by the Bloomington Faculty Council

The IU Archives’ record collection includes organizational planning documents surrounding the Charter’s formation and publication; however the majority of the collection is comprised of proposal materials submitted by faculty panels. Records from both funded and unfunded projects are retained, which provide an interesting perspective on Indiana University’s values in the late 1990s. Many proposals are technology focused, though other aspects of development focused on areas such as diversity and various facets of scholastic excellence are also represented. A number of newspaper clippings in a corresponding Strategic Directions Charter reference file attest to the fact that not all university constituents, namely faculty and students, were pleased with the Strategic Direction Charter’s aims and outcome.

To delve deeper into this period of significant directed change in Indiana University’s priorities in the late twentieth century, contact the IU Archives. If you haven’t tried it yet, I encourage you to test out the convenient chat reference service that we provide during most operating hours!