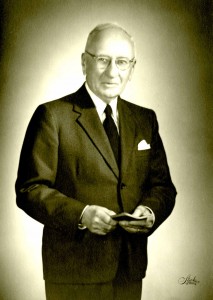 Born July 18, 1872 on a farm near Germantown (Wayne County, Indiana), Frank Orman Beck came to Indiana University as a student in 1890, receiving his A.B. in 1894 and A.M. in 1895, both in comparative literature. While teaching part-time his senior year at Bloomington High School, he met then-student Daisy Woodward and the two were married on July 23, 1899, shortly after she received her A.B. degree from the University. Over the next decade, the two traveled extensively to continue their studies – she at the New England Conservatory of Music and he Boston and Harvard Universities, the University of Chicago, and Edinburgh University in Scotland. Upon their return to the United States in 1912, the Becks settled in Chicago where Frank spent over 25 years serving as a teacher, minister, and social worker in places such as the Wabash Avenue Methodist Church in the infamous First Ward on the fringe of The Loop, the Chicago Welfare department the Chicago Inter-Church World Movement and with Jane Addams in Hull House and in the missions along “Skid Row.”

Retiring from his first career in 1934, Frank and Daisy returned to their alma mater to serve as unofficial counselors to the student body and the administration – building a religious program on the university campus which sought to ease prejudice with tolerance and understanding. As the programs grew, the Becks began a nearly twenty year campaign to build a place of worship on the Indiana University campus for those of all faiths, and in 1957 thanks in large part to their own vision and financial support, Beck Chapel was dedicated. Today the chapel stands as a symbol of religious unity, but not according to Beck “a chapel of a universal religion but a chapel that recognizes the claims of all religions – a chapel that avows that ‘light is good in whatever lamp it burns.’”

The University Committee on Religion and the Student Religious Cabinet

On December 3, 1937, as one of his first official acts as University President, Herman B 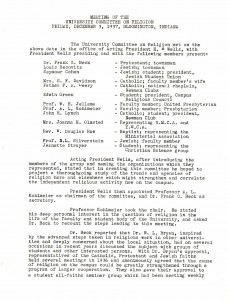 Minutes of the 1st Meeting of the Committee on Religion, December 3, 1937

Wells established a University Committee on Religion. Composed of members of faculty, local clergymen, group religious sponsors, lay members, and students, the group was tasked “to correlate the independent religious activities on the campus, and to study trends and agencies here and elsewhere for the expansion and unification of religious service to faculty and students.” With Frank O. Beck serving as the Executive Secretary, with the outbreak of the Second World War the group acknowledged that:

The pressing need of national unity today makes it imperative that religion become a unifying force rather than a divisive one. The common ground of various faiths must be cultivated. All faiths must go harmoniously together as far as they can. Between all the religious units of the campus efforts must be made to create the mutual understanding and unity resulting from a common belief in democracy and in the ideals of liberty and a common God.

Within a few months, the Student Religious Cabinet – under the leadership of the Committee on Religion – was established consisting of representatives from various religious faiths on campus in an effort to ease prejudice with tolerance and understanding. As outlined in their constitution, they sought to “form a pan-faith fellowship which will correlate all religious activities of the campus, promote fellowship and understanding among all religious groups and faiths on the campus and to do collectively many things which they may not be able to accomplish as separate entities.” 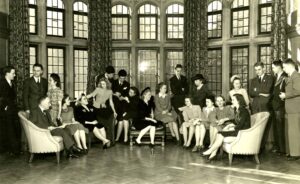 Soon after its organization the Cabinet set up five special interest groups, officially known as commissions on Inter-Racial Fellowship, Social Creed and Action, Peace Education and Action, Personal Religion and Worship, and Inter-faith Fellowship and Work. Through conferences and seminars, campus publications such as The Voice of Religion, morning group breakfasts, and chapel colloquies, they sought to address the larger social, political, and religious issues of the day such as racial segregation, religious intolerance, European refugee students, and building morale and involvement in wartime activities.

The Gift of a Chapel

On January 29, 1941, during a special banquet in Alumni Hall sponsored by the

University Committee on Religion and the Student Religious Cabinet, 1937 Nobel laureate Dr. Arthur Compton spoke on “A Scientist’s Conception of God.” Following the lecture, university President Herman B Wells stood before over 400 members of the faculty, student body and the public to announce a generous gift from Frank and Daisy Beck to construct a chapel for those of all faiths on the campus. The Board of Trustees accepted the gift shortly thereafter, and the university architects presented a conceptual drawing for the proposed structure.

Frank Beck, the Curator of the Chapel concluded the ceremony in prayer: 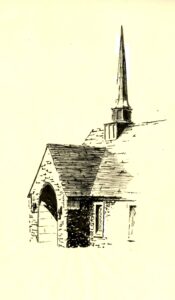 Almighty God from whom every good prayer cometh, and who poureth out on all who desire the spirit of grace and supplication, deliver us when we draw nigh to thee, from coldness of heart and wandering of mind.
Our Eternal God under whose guidance our fathers walked and by whom they were strengthened and sustained:
We pray that the spirit which kindled their faith may descend upon us;
That the students who are upon our campus today may aspire nobly, adventure daringly, and come to the realization of one world under God in the common meeting ground of faith which is the common essence of Brotherhood;
And when they go out keep them amidst the perils of their uncertain way.
We pray that by faith we may see the needs of those who will come after us, to bequeath to them a rich heritage, and to share with them the widening vision.

The Grove of All Faiths

On February 10, 1942, representatives from 100 student organizations, three devoted religious leaders – Rabbi Cronbach, Professor at the Hebrew Institute of Cincinnati, Dr. James Gillis, editor of The Catholic World, Dr. Charles C. Morrison, editor of the Christian Century – President Wells and Dr. Frank Beck (below shown left to right) gathered on the proposed site of the new chapel to plant three trees representative of each of their faiths. Those present for the dedication joined in unison:

Planted in a Triangle, may these trees ever symbolize to us the harmony and unity that should dwell among us, and, above all the divisions, of our imperfect society, assert the Brotherhood of man. 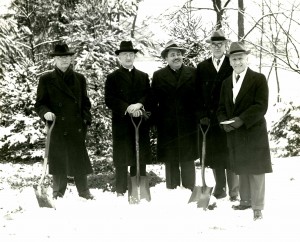 Over the course of the following years, trees symbolizing the other religions of the world joined the initial three, including Christian Science and the “Religions of the Orient.”

A Symbol of Religious Unity

Within the Chapel sacristy are housed the holy symbols and scriptures of all the world’s religions including a rare copy of the Koran hand-painted in gold; the book of Genesis written in Hebrew and printed from wood-cuts in Rome in 1578; The Dahamapada, the Canonical Scriptures of Buddhism; a Torah; and a Bible. 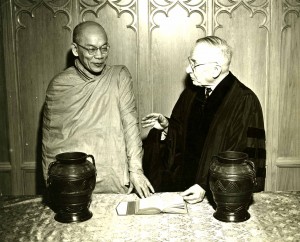 The Venerable U. Thittila, Professor of Buddhist Philosophy at the University of Rangoon, Burma with Dr. Beck examining holy vases from Korea and a historic copy of the Koran. 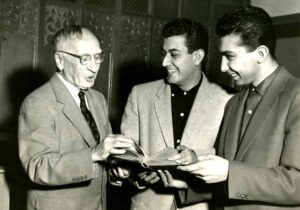 Extremely rare copy of the Koran, a gift of Izziddees Rawi, Ph.D, 1951, of Baghdad, Iraq, which was presented by Ziad Keilany of Syria and Sinan Rawi of Iraq.

In the words of Frank Beck, the chapel

…does not aim to resolve religious differences, or to seek religious compromise, or to reduce faiths to the lowest common denominator. On the other hand it holds a sensitive regard to the rights of varying religious opinions and seeks to encourage respect for the ethical and religious values of each of the historic faiths represented in the student body and faculty.
The Chapel would, however, represent a sense of unity in this rich diversity. It will not become a chapel of a universal religion but a chapel that recognizes the claims of all religions – a chapel that avows that ‘light is good in whatever lamp it burns.’
It strives to unify by contending that all differences of religion are subordinated to a higher and more comprehensive agreement: that truths high enough are sure to meet. It strives to establish that all true religions seek sufficient depth and universal outlook to rise above all differences; and that with the oneness of mankind as the central problem of the age, we come nearer to God as we come nearer together.
Thus, the Chapel will not become the chapel of a common creed, but the chapel of a common quest, granting free and full expression to each faith represented on the campus, with each faith enriching others by the differences of faith and function.

Today, the Chapel continues to serve as the home for those of all faiths, with services held representing the Christian (Catholic and Protestant), Jewish, Buddhist, Confucian, Hindu, Muslim, Shinto, Sikh, Zoroastrian, Taoist, Coptic and Baha’i faiths. In addition to symbolizing a higher search for religious tolerance and unity on campus, annually the Chapel witnesses the exchange of numerous engagement and wedding vows, christenings, memorial services, devotional services, organ recitals and simply as a quiet place of self-meditation amidst the bustle of campus life.

Visit the Archives reading room through September to view the exhibit, or contact an archivist to see the Frank O. and Daisy Beck papers.