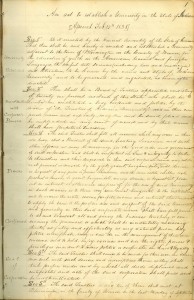 The official charter for the Indiana University Board of Trustees, written in 1838. Click on the image to see the full 6-page document.

An act to establish a University in the State of Indiana [Approved Feb. 15th, 1838]

Sec. 1st. Be it enacted by the General Assembly of the State of Indiana that there shall be, and hereby is created and established a University adjacent to the town of Bloomington in the County of Monroe for the education of youth in the American learned and foreign languages, the useful arts, sciences (including law and medicine) and literature, to be known by the name and style of “Indiana University,” and to be governed and regulated as herein after directed.

Sec. 2nd. There shall be a Board of Trustees appointed consisting of twenty one persons, residents of this State, who shall be hereby and constituted a body corporate and politic by the name of “the Trustees of Indiana University”….

So reads the first lines of what exists today from the IU official record transforming the former “Indiana College” to “Indiana University” – the prior minutes dating to 1820 were lost in the fire of 1883. These minutes of the Board of Trustees contain a wealth of historical information in regards to the operation of the university detailing the projects, finances, personalities, and goals that have shaped its existence.

Because this official record contains such insight into the history of the unviersity, a number of years ago a decision was made to bring them to the web through a cooperative project between the IU Digital Library Program, the Board of Trustees, and the University Archives, allowing for instant access and search capability. The site can be found here: Minutes of the Board of Trustees. The official hard-copy minutes (shown to the right) are still available at the University Archives, where researchers are welcome to view these valuable documents. 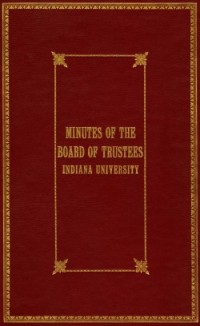 A Board of Trustees Meeting Book.

Minutes prior to 1981 have been scanned and made readable via Optical Character Recognition (OCR) technology; present-day minutes are word processed and delivered ready to be formatted for the web.  All minutes are encoded into TEI (Text Encoding Initiative) using the XML editor <oXygen/>.  Working backward chronologically, the Minutes are written in TEI and then made available on the web.  The Board of Trustees site is fully searchable—one can search all online minutes or can choose to search within a specific meeting or period. At present, minutes from present-day to mid-1957 are accessible online.

As the Board of Trustees (BoT) project encoder, I have worked with the minutes since August of 2010.  In order to maintain the integrity of the minutes, I seek to duplicate each meeting as closely as possible in its online counterpart.  In addition to present-day meetings, I have worked primarily through meetings dating from December of 1959 to early 1957.  At the moment, I find myself encoding the meeting of February 18, 1957.  Traveling in reverse from meeting to meeting has its peculiarities—I often know the result of an issue before I know of the issue’s existence.  The experience is akin to beginning a book at the last chapter, reading that chapter, and then jumping back to read the previous chapter, and so on.  However, the material is always engaging and each discussion point, regardless of importance large or small, is given good context. 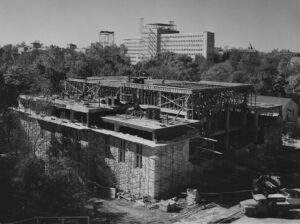 I feel I may declare some slight expertise on University operations in the last years of the 1950s after my time on this project.  From 1957 to 1959, IU underwent massive change, assumed great challenges, and strove for increased prominence.  The University continued to expand, not only in Bloomington but across the state.  During these years, the Gary Center and Fort Wayne Center, now IU Northwest and IPFW, became important components of IU’s statewide system.  In Bloomington, the Board of Trustees oversaw the purchase of many homes and property in order to make room for campus expansion.  The Fine Arts Building and Lilly Library received funding and came into being.  A new football staff arrived in 1957; most of the staff had left the university by 1959.  Of course, not all additions are as noticeable as a shiny new building or changes in athletics.  For example, the University purchased the personal papers of Upton Sinclair during this time; see the May 18, 1957 minutes for details. 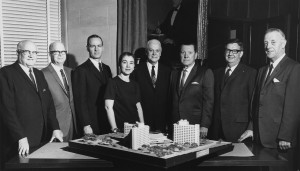 Members of the 1964-65 Indiana University Board of Trustees

These are but a few examples of events from a short three-year period.   Indiana University continues to move forward and the Board of Trustees has overseen it all.  Each meeting offers something of interest to those researching the history of Indiana University, the city of Bloomington, or the state of Indiana.  Anyone interested in these histories will certainly find noteworthy items in the Minutes of the Board of Trustees.  Whether one chooses to use the original paper records or the online site, I hope you enjoy studying the Minutes as much as I have enjoyed working with them!

By Neal Harmeyer, Board of Trustees project encoder