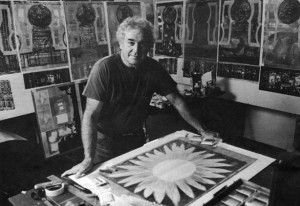 Updates have been made to the papers of Rudy Pozzatti, IU Distinguished Professor Emeritus of Fine Arts. Pozzatti recently moved and the Archives has received additional correspondence, exhibition catalogs, and other publications. The two largest sections of the existing collection are dedicated to correspondence and exhibition catalogs and these files now include materials dated through 2010.

An exciting addition to the collection are the plates and woodblocks used by Pozzatti to create his work. Over 150 zinc, aluminum, and copper plates and some 50 woodblocks were deposited in the Archives, along with a number of matboards. These items represent Pozzatti’s work from the late 1950s to 2009. In addition to materials used to make artwork, there are also personal items, such as a zinc plate that Pozzatti used to create a back-splash in the kitchen of his house for his wife, Doti. There are also plates and woodblocks used to make holiday cards and the birth announcements for Pozzatti’s daughters, sent to friends and family. 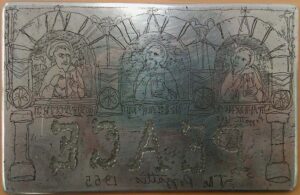 The plates and woodblocks document Pozzatti’s creative process over the decades. His artistic career continues today and the materials map his experimentation with styles and methods. 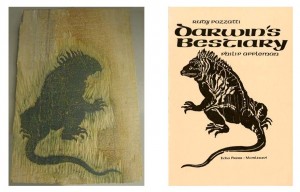 In 1986 Pozzatti created illustrations to accompany poems written by Philip Appleman in the fine art book, Darwin’s Bestiary. The book was published in a limited edition by Echo Press, an independent print workshop founded by Pozzatti in Bloomington in 1979. The Archives has an edition of the book with the original lithographs in the Pozzatti papers.

The collection as a whole is a glimpse into Pozzatti’s artistic production. The inspiration to create work and challenges encountered during production are discussed in correspondence about projects and letters sent by Pozzatti to friends and colleagues. The results of his work are represented and analyzed in exhibition-related material and published articles. Now the physical materials used to create Pozzatti’s work are also available for study. 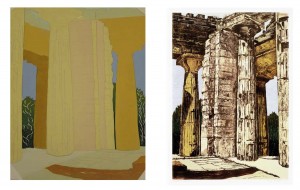 The print materials represent commissioned work, award-winning work, and some woodblocks and plates that were never editioned.

There are a number of plates from prints inspired by or made during Pozzatti’s travels and as a visiting scholar, such as the zinc plate for Belgrade I. This print was completed in Yugoslavia as part of a U.S. State Department cultural exchange in 1966. The prints Pozzatti produced during the 1966 trip were shown during the International Trade Fair and were seen by nearly half a million visitors to the fair. In addition to this print, there are many other pieces that have fascinating origins. 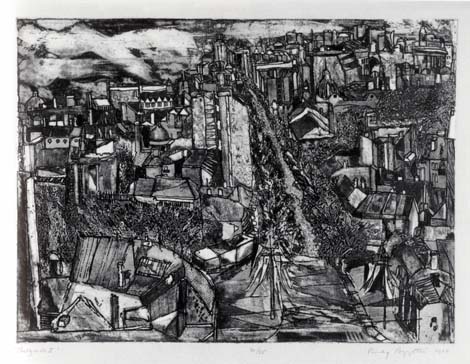 Belgrade I (Not held in the IU Archives collection), 1966.

If you are interested in learning more about the Rudy Pozzatti papers, please review the online finding aid and contact the Archives!