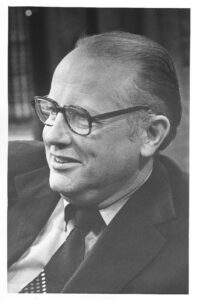 Following the abrupt resignation of Joseph Sutton upon the death of his wife, John William Ryan was named the 14th President of Indiana University on January 26, 1971 . The circumstances of his appointment were somewhat controversial, as the Board of Trustees quickly ushered Ryan into office, forgoing the lengthy process of instituting a search committee in favor of maintaining strong university leadership. However, John Ryan was no stranger to Indiana University. He earned both his master’s and doctoral degrees in political science from the university and served as vice president of IU’s regional campuses for three years before his appointment. In addition to the controversy surrounding the beginning of his presidency, Ryan came into the position during a somewhat tumultuous time. The 1960s were filled with student activism, largely as a result of the Vietnam War, as well as a general anti-establishment attitude. Ryan took office during the tail end of this. Additionally, in 1969 there was a zero percent increase in state appropriations to the University, and tuition was raised by a staggering 66.7 percent. Coupled with an overall national decline in federal support for undergraduate programs, this placed the University in a somewhat critical financial situation.

Ryan weathered these storms and went on to accomplish many things during his tenure. After assuming the presidency, Ryan summed up his goals, saying:

Ryan went on to oversee most of the construction of I.U.P.U.I., as well as the creation of the Southeast campus at New Albany. He is largely credited with the development of the regional campus system, which increased the number of degree opportunities for citizens around the state. Through this endeavor, he also strengthened Indiana University’s ties to Purdue University. In 1986 Ryan was named one of the top 100 most effective college leaders in the nation. He was also appointed to serve as chairman of the National Advisory Board on International Education, which was created to offer counsel to the Secretary of Education.

While these are all admirable achievements, one accomplishment that John Ryan held very dear was his receipt of the Horatio Alger Award from the Boys Club of Indianapolis in October 1981. This award is given to someone who has overcome humble beginnings and achieved significant success. Born in Chicago in 1929, Ryan was the oldest of six children. Having grown up in a large family, there was no money for him to attend college. Consequently, he took the Navy ROTC test and was sent to the University of Utah. Once in Utah Ryan enrolled in college, but his finances were so terrible that he began going to the Knights of Columbus Hall for free meals. It was there that he met a man who would later become his father-in-law, and through him he met his future wife, Patricia Gooday. After marrying, Ryan held down two jobs while finishing his bachelor’s degree. 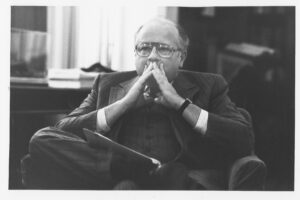 John Ryan remained Indiana University’s president until 1987, when after almost 17 years he stepped down. However, his work for the University was not over. One of his primary reasons for leaving the presidency was to concentrate on the Campaign for Indiana, which was launched in 1985 as a five-year effort to obtain private funds for the university in order to provide increased endowments in support of faculty, students, research centers, libraries, and museums. The Campaign also provided funding for program development and construction projects.

Throughout his time at Indiana University, Ryan earned the respect of staff, faculty, legislators, and alumni. He had a vision for the growth of the university and the results of that vision can be seen today in IU’s eight-campus system. To learn more about the life, presidency, and accomplishments of John Ryan you can read his speeches here, or request to view records from his presidency at the Indiana University’s Archives!