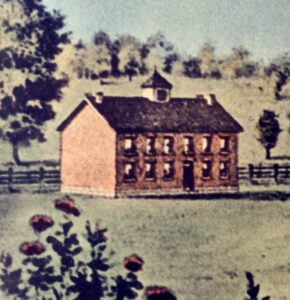 Last Friday marked the rededication of Seminary Square Park (and the bombshell by former state historical marker manager Jeremy Hackerd that his research uncovered the fact that IU classes began in 1825, not 1824, as previously thought!).

What do you know about Seminary Square?

Before becoming a park in October of 1996, the site was home to the first seminary building – yes, Indiana University began as a Seminary, but was not a religious institution. Rather, at the time of establishment, institutions of higher education were oftentimes called seminaries. A committee of men was created to select the land in which the Seminary would be located.  Five of the men traveled to Bloomington to scout out the perfect piece of land.  The land was “about one quarter of a mile due South of Bloomington on a beautiful eminence and convenient to an excellent spring of water, the only one on the section selected that could with convenience answer the purpose of the Seminary.” (Indiana University Alumni Quarterly, 1924, p.382)  It was not uncommon in those days for springs of water to be used to determine the proximity of towns and buildings and the spring which set the stage for the Seminary and the future Indiana University became known as the “Lowe Spring,” named after Trustee William M. Lowe (1820-1826, 1828).

Authorization for the construction of the Seminary was passed in 1820. The building did not begin however, until April 17, 1822, and was not fully completed until the spring of 1824.  The Seminary opened the doors to its first class in 1825, with the tuition fees amounting to $2.50 a session. In 1828, the Indiana General Assembly renamed the school Indiana College, and again changed the name in 1838 to Indiana University.  In 1883, a devastating fire prompted officials to consider relocating the campus. After investigating several possibilities, it was determined the campus would be moved to Dunn’s Woods and the city purchased the old college site for its high school, where it remained until 1967.

In 1922, Indiana University celebrated 100 years of being an educational institution. During the ceremony a time capsule was buried with at least one known photograph (shown below) as well as other University items with instructions to open the capsule in 2022. Recently a patron inquired about this time capsule, wanting to know if the archives knew what other items the capsule held but I was unable to locate any information regarding the contents of the capsule.  If anyone does know what is in the time-capsule or any other information regarding the event, post your comments on the blog wall! 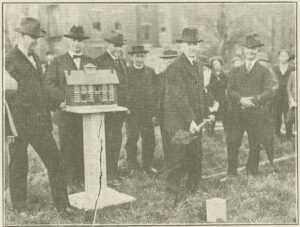 Dr. Bryan is shown above turning the first spade of earth for the placing of a tablet upon the plot which the old seminary building stood. This photograph was taken and sealed along with the other University valuables. (Indiana Alumnus, 5 August, 1922, p.7)