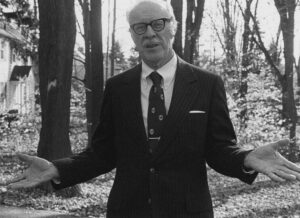 Indiana University’s Lynton K. Caldwell became known as the “grandfather of biopolitics,” “the father of the environmental impact statement,” and “one of the most influential people in the entire protection movement” (Indiana Alumni, May/June 1993, p.12). He devoted his life to researching and debating environmental science. Caldwell was an Arthur F. Bentley Professor Emeritus of Political Science and professor emeritus of public and environmental affairs at IU. He held the degree of Ph. B. (Bachelor of Philosophy, 1934) and Ph. D. (Doctor of Philosophy, 1943) from the University of Chicago, an M.A. (Master of Arts, 1938) from Harvard University, and an LLD (Doctor of Laws, Honorary, 1977) from Western Michigan University.

Caldwell began his teaching career at IU as an assistant professor of government at IU South Bend from 1939-1944. He returned to IU Bloomington in 1965 where he taught political science as well as public and environmental affairs until his retirement in 1984. He also served on the faculty of several other institutions of higher education including the University of Chicago, Northwestern University, the University of Michigan and the University of California at Berkeley. In addition to his teaching career, Professor Caldwell held staff and consulting assignments for United States Senate, Congressional Research, and the United Nations, just to name a few.

Caldwell was an avid researcher and writer from 1943-1993. His collection of papers held by the University Archives includes his dissertation, “Contributions to thought on Public Administration: Hamilton and Jefferson,” (1943); over books and collaborative works including: Environmental Policy, Law, and Administration: A Guide (1979), Biocracy: Public Policy and the Life Sciences (1987), The National Environmental Policy Act: An Agenda for the Future (1998) and International Environmental Policy: Emergence and Dimensions (1984), which received the Sprout Award from the International Studies Association in 1985.