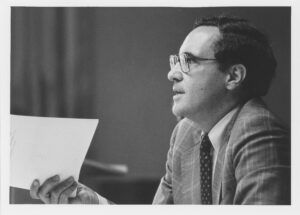 The archives recently received and processed additional speeches from Kenneth R. R. Gros Louis. Gros Louis has a long history at IU. In 1964 he relocated to Bloomington and began a new position as both Assistant Professor of English and Assistant Professor of Comparative Literature. In 1978 he was named Dean of the College of Liberal Arts and Sciences. On September 15, 1980, he was named Vice President of the Bloomington campus before being promoted to Vice President of all of the Indiana University multi-campus system as well as adding the title of Chancellor of Indiana University-Bloomington on July 1, 1988. Effective August 11, 1994, IU president Myles Brand, expanded Gros Louis’ role in the universities administration and changed his title to “Vice President for Academic Affairs.” In January 2006, the Board of Trustees conferred upon him the title of University Chancellor, making him just the 2nd person to hold the esteemed title, which was created and held by IU’s beloved Herman B Wells from 1962 until his death in 2000.

Gros Louis’ primary responsibilities as Vice President and Bloomington Chancellor were the fielding of complaints and comments from students, faculty, and staff at IU. He was also responsible for aiding in the development of the universities academic agenda. In order to strengthen IU’s academic agenda, he often advocated that a stronger undergraduate curriculum will attract and keep good professors at IU. It was issues such as racism, sexism, quality of education, faculty concerns, and student living that were the motivating factors behind many of his administrative decisions. In 1994, with a change in job title to Vice President for Academic Affairs, he was then responsible for faculty promotion and tenure decisions; academic planning and program reviews; major curriculum revisions; accreditation; and improved interaction with the universities deans. On top of these administrative responsibilities, he also made great strides in improving IU as an educational and social institution by creating the Herman B Wells Program for Outstanding Scholars; he championed the effort to open the Office of Gay, Lesbian, & Bisexual Student Support Services; influenced the founding of the Film, Jewish, & Afro-American studies departments; and was instrumental in the development of the School of Journalism, formerly a department, and the School of Informatics. 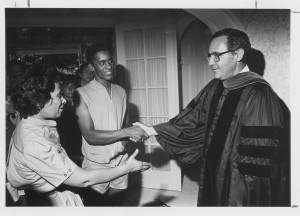 The recent accession primarily includes speeches that Gros Louis made from 2002 through 2011, including ones given at faculty memorials and retirements, various anniversary celebrations, commencements, awards ceremonies, and much more. These, along with the rest of Kenneth R. R. Gros Louis’ speeches can be found in C220. This collection contains the speeches that he made while employed in his various IU administrative capacities, spanning from 1979-2011, including those relating to faculty councils, freshman introduction ceremonies, campus events, as well as various inspirational speeches on topics such as “Women in Science” and “Minority Mentoring.”