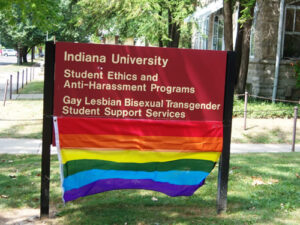 The archives recently received and processed the records of the Gay, Lesbian, Bisexual, and Transgender Student Support Services (GLBTSSS) office. Serious discussions about the formation of an Indiana University campus support center for gays and lesbians began in the late 1980s. A task force was appointed in 1990 to gather information on such a center and after three years of research, members of the task force submitted a report formally recommending that such an office be created. Proponents of the center cited the increasing levels of harassment aimed at GLBT students. For example, from 1992-1993 there were 58 instances of anti-GLBT harassment. 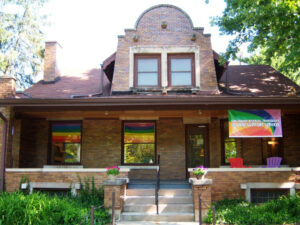 In the fall of 1994, the Gay, Lesbian, and Bisexual Student Support Services office opened amidst both support and controversy. The center’s name would not be amended to include ‘transexual’ until 1997, though the office claims that supporting transsexuals has been part of its mission since its opening. Doug Bauder, who is gay and an ordained minister in the Moravian church, was hired to be the coordinator of the office. Bauder has held the position since its opening. One of the biggest controveries surrounding the creation and opening of the center was the issue of whether public or private money would be used. Initially, $50,000 of public funds was allotted to the project; however, after complaints from many detractors, including numerous state legislators, it was decided that the $50,000 would come from private sources. This controversy was likely tied to other controversies surrounding the GLBT center, which included many misconceptions about its purpose. Some believed that the center would be used to promote homosexuality or that it would be a “mansion for gays.” Today, the center is publicly funded and much of the controversy has died down as the office has proven its mission of “providing information, support, mentoring, and counseling to members of the IU campus and the larger community.” 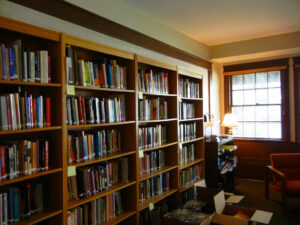 The office of the GLBT Support Services strives to be a resource center for all members of the Indiana University campus, not just those who fall under the GLBT label. The office contains a library of materials that focus on GLBT issues. It also serves as a center for education, collaboration, and networking for those interested in the GLBT community and promoting diversity on campus. The office has been an advocate for the rights and needs of GLBT students, including pushing for the presence of gender-neutral restrooms around campus and documenting instances of GLBT related harassment and crime.