The distinguished feminist scholar and literary critic, Susan Gubar, retired last year as Distinguished Professor Emerita of English after teaching at IU for 37 years. The Susan Gubar papers have been processed and the collection is now available for research. 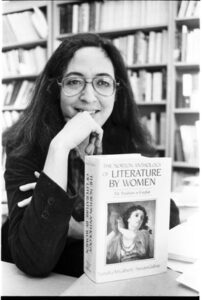 Susan Gubar with a copy of The Norton Anthology of Literature by Women: The English Tradition, 1986.

The Gubar papers cover a wide range of topics which are often interwoven: feminist theory, gender politics, literary theory and criticism, fashion studies, science fiction studies, race studies, film studies, Holocaust studies, and the importance of Judas in the history of Western civilization. Nearly all of her published work is represented in the collection, including copies of her books, articles from obscure publications to the well-known, and foreign language versions of her work.

Among correspondence with colleagues and friends, the Important Papers and Valuable Letters folders include letters from celebrated writers, such as Carolyn Heilbrun, Ursula Leguin, Toni Morrison, and Adrienne Rich. There are several exchanges with Sandra M. Gilbert, Gubar’s long-time collaborator and friend. One poignant letter is from Erica Jong, who described being moved to tears by the publication of The Norton Anthology of Literature by Women: The Tradition in English because it would have been unthinkable for such a book to exist when she was a student. Jong wrote that the anthology “represents the triumph of the movement in a special way. It means that our collective vision now enters the academy as a presence, a force, a named thing. (It is named; therefore it exists.)” 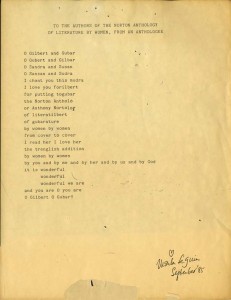 Another unique item is a poem written by Ursula Leguin for Susan Gubar and Sandra M. Gilbert in 1985, upon the publication of The Norton Anthology of Literature by Women: The Tradition in English. It reads:

TO THE AUTHORS OF THE NORTON ANTHOLOGY OF LITERATURE BY WOMEN, FROM AN ANTHOLOGEE

O Gilbert and Gubar
O Gubert and Gilbar
O Sandra and Susan
O Sansan and Sudra
I chant you this mudra
I love you forilbert
for putting togubar
the Norton Antholo
or Anthony Nortolog
of literatilbert
of gubarature
by women by women
from cover to cover
I read her I love her
the trenglish addition
by women by women
by you and by me and by her and by us and by God
it is wonderful
wonderful
wonderful we are
and you are O you are
O Gilbert O Gubar!

Exuberance radiates from the Gubar papers, particularly from her work as an educator. From documents concerning the organization of conference panels and lecture series it is easy to sense the excitement generated by the exchange of ideas. A number of publications in the collection include observations and notes made by Gubar in the margins. The collection makes evident the boundless scope of Gubar’s interests and also how much she considered and valued what others produced, whether they were colleagues in the field or individuals outside the academic community.

If you want to learn more about the Susan Gubar papers, please refer to the finding aid and contact the IU Archives!