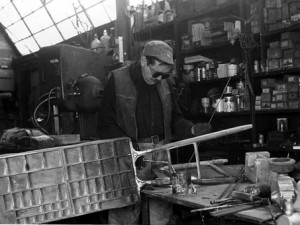 David Smith working on Sitting Printer, 1954. Photograph by the artist, taken at his workshop in Bolton Landing, New York.

I recently had the opportunity to delve a little deeper and learn about a famous sculptor who taught at Indiana University for the academic year of 1954-1955.  David Roland Smith came to I.U. to temporarily replace full-time Professor of Sculpture Robert Laurent who was on sabbatical serving as an artist-in-residence at the American Academy in Room and at the same time conceptualizing the early designs for IU’s Showalter Fountain.  In May 1954, Henry Hope, Director of the School of Fine Arts, confirmed the arrival of Smith and welcomed him to I.U.  During spring 1954 and fall of 1955 Smith taught multiple classes including First Year Sculpture I & II, Second Year Sculpture I & II, and a Graduate Sculpture course. Shortly after arriving in Bloomington, Smith rushed off to Venice, Italy as the United States delegate to the International Conference on Plastic Arts.  His sculptures were also included in the International Biennial Exhibition of Art which preceded the conference in Venice.

Now you may be wondering who is this Smith guy and how did he achieve this level of success?  Smith began his training at the Cleveland Art School while still in high school.  After graduation he studied at Ohio University for a year and quickly moved to Notre Dame University, where he would only stay for a short time. During summer breaks he spent his time working at the Studebaker automobile factory in South Bend, Indiana where he began honing his skills as a riveter as well as soldering and spot-welding.

By 1927 Smith ventured off to Washington, D.C. and then New York City where he met Dorothy Dehner, a young painter studying at the Art Students League (ASL). By December of that year they were married. From 1927-1932 Smith studied at the ASL under many artists including the American realist painter John Sloan, drawing instructor Kimon Nicolaides and Czech modernist painter Jan Matulka.

After more traveling and a variety of jobs, Smith and Dehner finally bought a fixer-upper in upstate NY where they would spend the next decade.  Along the way Smith continued to travel, meet more artists, and became very interested in combining constructed forms and paintings.  Smith continued to blossom as an artist by expanding and using a wide array of mediums including: wood, wire, stone, aluminum rods, soldered materials and – my favorite – “found” materials, all the while slowly building his art studio which became known as Terminal Iron Works.  By the time Smith arrived at I.U. in 1954 he had already produced a multitude of pieces and participated in a wide array of exhibits.

Although Smith was only at I.U. for a brief time he continued to create art work and even participated in the Midwestern College Art Conference held at I.U. in October 1954.  Smith exhibited 13 sculptures and his 15 “medals for dishonor” at the conference.  His medals were cast before World War II and depict the horrors of war.  He said he got the idea for the “medals” from German war medallions that were used for propaganda during the war.  Check the medals out for yourself here.

After his time was up at I.U. he continued to travel the world and create, up until his tragic death in 1965.  To learn more about David Smith and his art work check out the David Smith Estate. 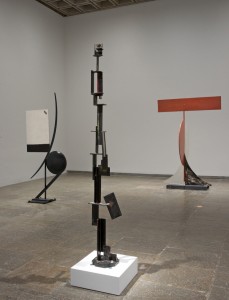 To see more of David Smith’s work in person you can visit the exhibition David Smith: Cubes and Anarchy, currently on view at the Whitney Musuem of American Art through January 8, 2012. 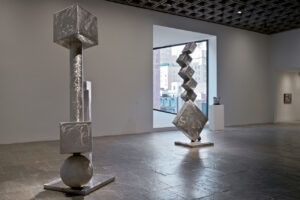