In the spring of 1948, Henry R. Hope, chairman of the Fine Arts Department, in collaboration with the I.U. Foundation, pulled off a small miracle for the then sleepy town of Bloomington, Indiana and the campus of Indiana University, which was then home to only 11,414 students. The rapidly expanding and nationally recognized Fine Arts department as well as the recently completed campus Auditorium (1941), caught the attention of the Metropolitan Museum of Art which was in the process of organizing a traveling exhibition of some of its most famous paintings.

The introduction to the exhibition catalogue pointedly laid out the intent behind the Metropolitan traveling exhibition program and partnership with Indiana University:

The Metropolitan Museum of Art welcomes this opportunity to

bring its treasures before the public of the Midwest. Since 1870 this Museum has pioneered in the cultural and artistic life of this continent. It has opened the door to three generations who have seen beyond it the broader horizons of our common past…

The Museum now has accumulated collections beyond, indeed, the capacity of its present buildings and the immediate needs of its metropolitan audience. Our duty and our opportunities lie in the nation at large where by sending exhibitions to other museums we may assist our colleagues in the common task of awakening Americans to the responsibilities of world leadership and the understanding between peoples.

We are grateful to Indiana University for its initiative and hospitality and hope this will be but the beginning of an exchange of people, ideas, and works of arts. 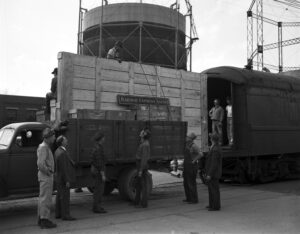 After great anticipation, at the beginning of April a special steel railroad car under special guard arrived in Bloomington via the Monon Railway, bearing, according to the Bloomington Star-Courier, “about a million and one quarters’ dollars worth of wood and canvas that has been decorated over a period of more than 400 years.” 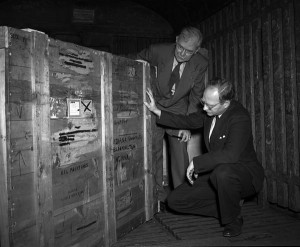 Once unloaded, the crates were transported by truck to the south entrance of the Auditorium, where within days they would hang alongside the famous Thomas Hart Benton Murals.  Over the course of the coming weeks an estimated 70,000 individuals would flock to the halls of the auditorium to gaze upon the marvels, while numerous lectures, classes, musical performances, and public and private tours were held in conjunction.

Wondering by chance WHICH 30 famous Old Master paintings traveled to Bloomington? For that you’ll have to wait until next week for Part II of the story –  but I’ll just tell you that it gave this art nerd goosebumps! 😉