See Part 1 of this blog series at https://blogs.libraries.indiana.edu/iubarchives/2011/12/09/the-big-apple-comes-to-blooming-town/

Drum roll please… For those of you who’ve ever taken an introductory Art History course, you’ll understand why I got so excited to uncover that our small town in Indiana was for approximately two months in 1948 the temporary home to 30 of the Metropolitan Museum of Art‘s masterpieces, including works by Rubens, Titian, Rembrandt, El Greco and Bonheur (see complete inventory below). Many of these works even today hang on the gallery walls of the museum. 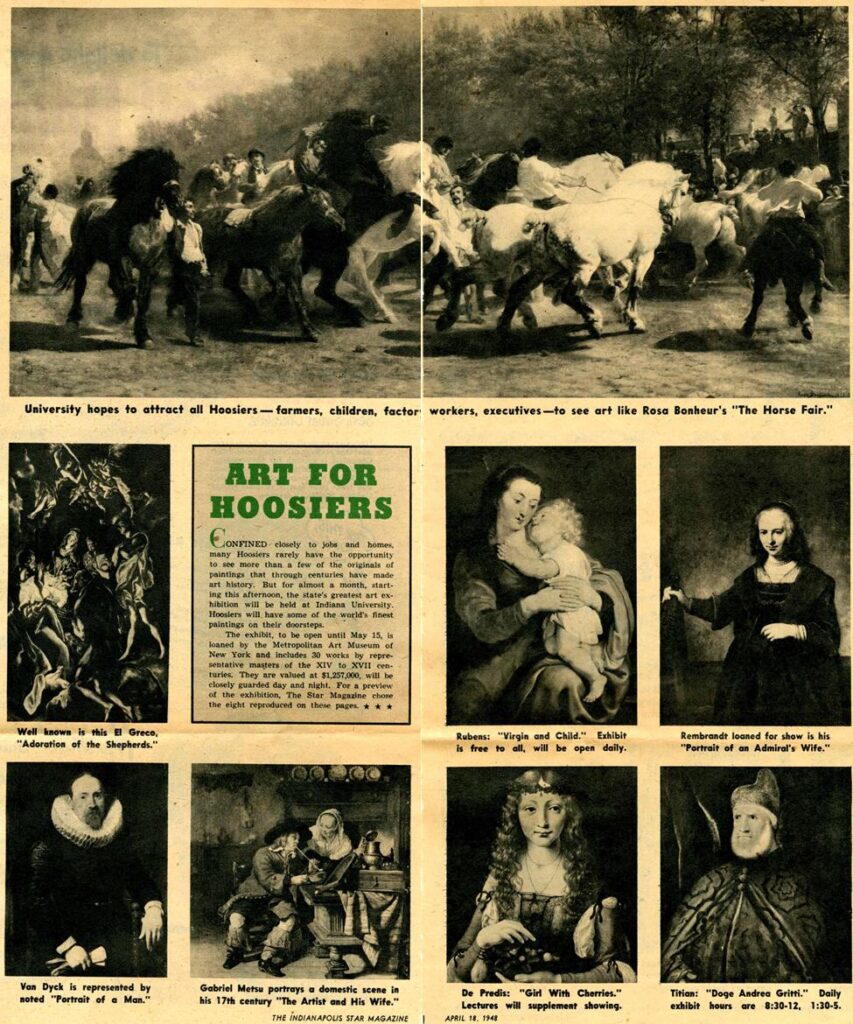 Upon arrival in Bloomington (by way of the Dallas Museum of Fine Art and the State University of Iowa), the university immediately overtook responsibility for the security of the precious cargo. The crates were transported by University truck to the Auditorium where they were unloaded at the south scenery entrance to the main stage.They remained in storage on the stage until they were unpacked and hung by personnel furnished by the Metropolitan. 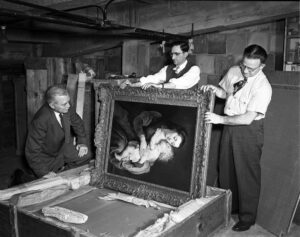 Judging from the reports, it appears that the uncrating and installation of the exhibition went off without a hitch, aside for some humorous anecdotes surrounding Rosa Bonheur’s (8 x 16 1/2 foot) “Horse Fair.” According to the May issue of the Indiana Alumni Magazine it “took a dozen of them [University workers] more than a half-hour of grunting, sweating and tugging to maneuver the big “Horse Fair” out the end door of the railroad car. Loaded 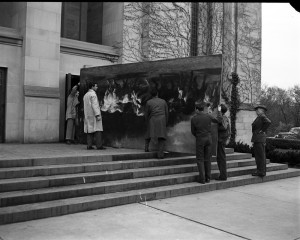 onto the truck, it stuck out four feet from the tailgate.” When it came time for installation, according to the Lawrence Wheeler’s April 23, 1948 column in the Star-Courier, the enormous painting was apparently uncrated in the scenery room back stage and then carried out through the big doors near the stage along the street adjacent to the Auditorium. Said Wheeler, “Some twelve men were handling the picture. Everything went well until the turn had to be made toward the front door of the Auditorium. 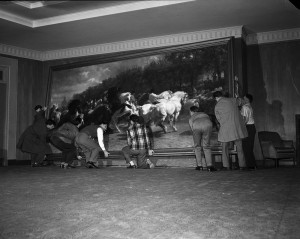 There the wind caught the big surface and it was touch and go for a minute as to whether the horses wouldn’t become air minded and sail off down wind toward the B. and E. building.” (“B. and E.” = Business and Economics, or present-day Woodburn Hall.) These stories certainly do add to the humor and drama of those minutes! Once back inside, Met staff members re-framed the canvas, as the large canvas had to travel without its frame. 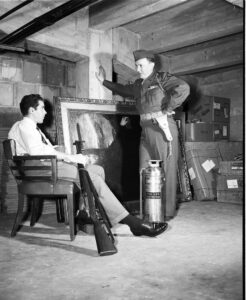 The security of the treasures was of the upmost concern. Campus police, under the direction of Don Kooken and Fred Cogshall, and ROTC upperclassmen under orders from Col. J.E. Graham, mounted a 24-hour armed guard of the priceless paintings. According to a March 25 memorandum outlining the arrangements and responsibilities for the various parties involved, “Five men from Pershing Rifles and/or ROTC will stand armed watches during normal exhibit hours. Additional men will be used during public programs. The Safety Department is to provide armed night protection.” Obviously, the university administration took the position as temporary caretakers of the paintings quite seriously!

30 Masterpieces: An Exhibition of Paintings from the Collection of the Metropolitan Museum of Art – April 18 through May 16, 1948

The exhibition opened to great fanfare – newspaper coverage flooded the Indiana Daily Student and the local and state papers. According to reports, on the opening Sunday of the exhibition, several hundred people waited outside the Auditorium for the doors to open and a reported nearly 4,000 saw the exhibition on that day alone. 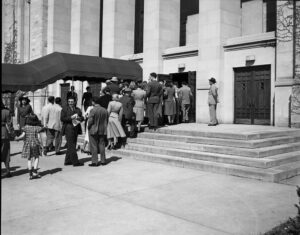 Over the course of the coming weeks grade school children, social organizations, religious and family groups, farmers and businessman flocked from near and far to see the 30 masterpieces outside of New York City. The May 1948 Indiana Alumni Magazine reported an anecdote about one young student visiting with his grade school class. While standing in front of “The Horse Fair”, he wrinkled up his nose and stated: “Not only do they look like real horses, they smell like horses, too.” University professors of literature, history, art and music used the paintings as the subject matter for their lectures; Fine Arts Department faculty provided special lectures and tours and students from the School of Music, under the direction of Dean Bain, provided Renaissance period music to serve as the backdrop to the display of 14th through 18th centuries artwork.

The full list of paintings included in the exhibition are below and where possible, links are provided to each object in Metropolitan Museum of Art database. Make special note of the number of paintings which are currently on view and their locations!

According to the final reports, the show brought 69,900 individuals to the Auditorium with no final cost to the University. While the University was responsible for transportation, insurance and security, Dr. and Mrs. Henry Hope provided a generous gift of $3,000 to cover the majority of the expenses. Sales of the printed catalogues resulted in an additional $1,453 which covered the full cost of the exhibition.

Following their brief stay in Bloomington, the 30 paintings traveled back to New York City where they again took their place upon the walls of the Metropolitan.

For more details about the exhibition, including correspondence, exhibition literature and additional photographs contact the IU Archives.