This is our last post from Heather, as she has moved on to the Kentucky Historical Society, where she serves as the Kentucky Folklife Project Archivist! Congratulations, Heather! 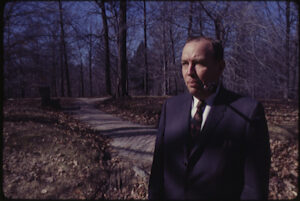 When completing the final arrangement of Vice President and Chancellor’s records, I got a glimpse of what it was like at I.U. during the 1960s and 1970s. During this time Byrum Carter was working his way up the administrative ladder through hard work and determination. Carter was Dean of the College of Arts and Sciences from 1966-1969 and in July of 1969 following a large-scale reorganization, Carter was named Chancellor of the I.U. Bloomington campus by the Board of Trustees. During his time as Chancellor, there was great political unrest and large-scale demonstrations at I.U., as elsewhere throughout the country.

While sifting through the collection I came across information on a student protest against General Electric and related materials on the Vietnam War. On Wednesday February 18, 1970 a debate was scheduled in Woodburn 100 by the Student Mobilization Committee to End the War in Vietnam, 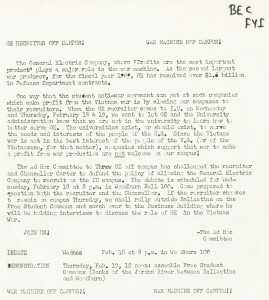 “Come prepared to question both the recruiter and the Chancellor.  If the recruiter chooses to remain on campus Thursday, we shall rally outside Ballantine on the Free Student Commons and march over to the Business Building where he will be holding interviews to discuss the role of GE in the Vietnam War” (demonstration was Thursday, February 19, 1970).  According to the flyer, GE received over $1.6 billion in Defense Department contracts during the fiscal year of 1969. An open letter to Chancellor Carter and the General Electric Corporation was also written by the student group calling out I.U. for allowing a “War Machine” to recruit on campus. The letter states,

“The GE recruiter on campus functions as an agent who channels students into the War Machine. By allowing war-related industries on campus, this university is giving visible support to their activities. The college campus is not a place where war should be promoted (if indeed there is such a place anywhere). Colleges cannot remain “neutral” because by doing so, they are taking a stand in favor of the status quo. They must take a stand AGAINST poverty, against racism and against war. As long as they are contributing to the continuation of the war in Vietnam and the American militarism and imperialism, they can take no such stand.” 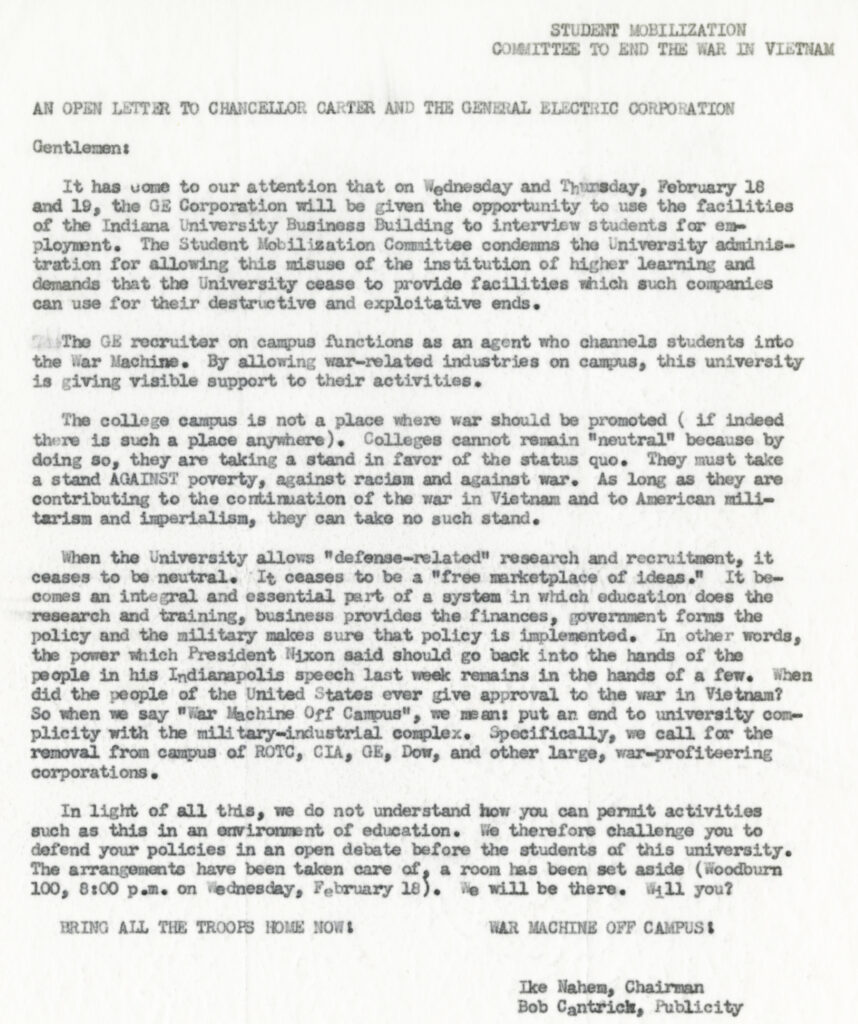 Open letter to Chancellor Carter and the General Electric Corporation

Among the correspondence I also found a February 18, 1970 news release issued by Chancellor Carter regarding the G.E. strike and debate, stating “It is the policy of Indiana 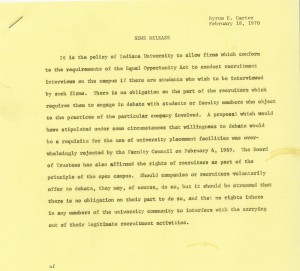 University to allow firms which conform to the requirements of the Equal Opportunity Act to conduct recruitment interviews on the campus if there are students who wish to be interviewed by such firms. There is no obligation on the part of the recruiters which requires them to engage in debate with students or faculty members who object to the practices of the particular company involved.”

On February 19, 1970 the IDS reported that, “Chancellor Byrum Carter said Wednesday afternoon that he would not debate with leftist students on the General Electric recruiting 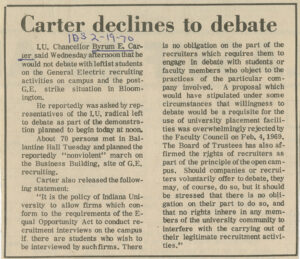 activities on campus and the post-G.E. strike situation in Bloomington.”

Among other things I discovered, campus and nation-wide demonstration fliers, a detailed list of precautions that should be taken in preparation for demonstration and multiple signed petitions. It appears that Carter played an active role in keeping the peace on campus while still allowing students to voice their opinions in a civil manner. However, as he advanced in the academic world his roles on campus slowly changed.

I was hoping to find some more information regarding the GE strike on campus, but after much time searching, I was unable to unearth any more information. If anyone was at I.U. during the Vietnam War and remembers the strike against General Electric I would love to learn more about it. To learn more about the role Chancellor Carter played at I.U., check out the collection’s finding aid and contact the Archives for access!