In my opinion there are few things which make winter “worth it,” the first one being waking up to fresh overnight snows such as the one from last night when the whole world seems a little but quieter… 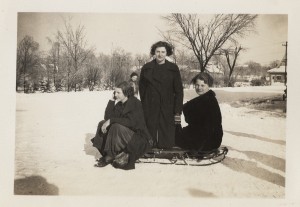 The second is sledding.

For those of you looking for a little sledding advice to partake in the fresh snowfall today, I will refer to the expert advice of the revered William Henry Techumseh Michaelmas (aka Lawrence Wheeler, the first Executive Director of the IU Foundation) in his column “Indiana, Our Indiana” which was published in the weekly Bloomington Star-Courier from the early 1940s to the early 1950s. 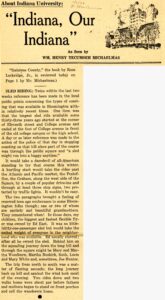 Can you imagine a time in Bloomington when you could sled through the public square? And that your only worry might be running into a buggy?

Following graduation, Wheeler joined the editorial staff of The Indianapolis Star and shortly thereafter moved on to a career in fund-raising for a variety of colleges, churches, hospitals and other public institutions. Upon the call of president Herman B Wells in 1944, Wheeler returned to his alma mater to become the first Executive Director of the Indiana University Foundation. However, during this period he continued to pursue his journalistic career, authoring his column “Indiana, Our Indiana” under the name William Henry Tecumseh Michaelmas and composing comedic letters of congratulation to a wide variety of individuals both public and private under the name Oscar B Burlap (imaginary IU alumnus and owner of the Burlap Turnbuckle Manufacturing Company).

The IU Archives holds the published and manuscript versions of Wheeler’s “Indiana, Our Indiana” column in which Wheeler’s often tongue-and-check prose covers the entire spectrum of Indiana University current events and history, often capturing the unique 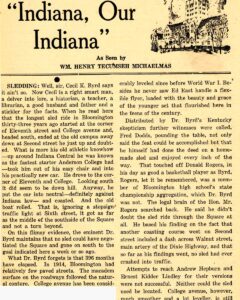 “flavor” of the campus in that era. Articles highlight athletic rivalries; the accomplishments of distinguished faculty such as folklorist Stith Thompson, Nobel prize winner Dr. Hermann Muller, and Rolla Harger, inventor of the “Drunkometer”, the predecessor to breathalyzer; campus events such as notable art exhibitions, performances by the Jordan River Revue and the proposed change of Jordan Field – the first athletic field on campus – into the present day IMU parking lot. Other columns highlight the activities of student groups such as the Board of Aeons and Sigma Chi fraternity; campus issues such as the massive increases in student enrollment following WWII, student employment and housing, and the use of the university library. To see copies of all of Wheeler’s “Indiana, Our Indiana” columns as well as his manuscripts contact the IU Archives.