Merely 15 years after the move to the present day campus, the members of the Classes of 1899, 1900, 1901 and 1902 established a University “Arch Fund” “for the construction of an arch over the Kirkwood Avenue entrance to the campus.” Noted contributors from the Class of 1899 found in the receipt books and ledgers 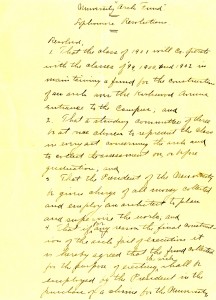 dated from June of 1899 include Charles Mahlon Niezer (IU Trustee from 1919-1935 who would later support a gateway proposal in the 1930s), Daisy Woodward (who married Frank O. Beck the same year), Lillian Gay Berry (member of the IU faculty for 41 years and first woman to chair a department) and Morton C. Bradley (grandson of Theophilus A. Wylie and relation of Andrew Wylie, IU’s first president) as well as the class officers. 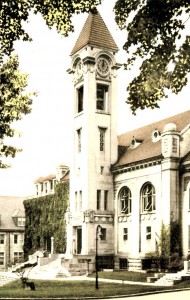 However, shortly thereafter, these classes learned that Theodore F. Rose, IU alumnus (A.B. 1875) and Trustee was already pursuing the acquisition of the old college portals with a similar purpose of erecting a gateway at the Kirkwood entrance. Thus the decision was made to transfer the contributions to the “Arch Fund” towards the purchase of chimes for the Student Building, which was then under construction. The chimes were dedicated on June 19, 1905.

By 1904, Rose’s plans to acquire the porticos of the old University Building were underway. The minutes from the June 20, 1904 Board of Trustees meeting read:

On motion of Mr. Rose, the Executive Committee was authorized to confer with the Bloomington City School Trustees with a view of securing the two porticos of the Old College Building, and that if secured the Committee was directed to secure plans and estimates to confirm to these for an entrance driveway for the campus at Kirkwood Avenue.

I send you by today’s mail blue prints of the old College portals and also photographs. I send you also measurements showing the width of the side walks and of the road way at the Kirkwood Avenue entrance to this campus. I have laid the proposition of the Board and of the Alumni Association before the City School Board and they have expressed themselves as favorable to our wishes.

According to IU historian Thomas Clark, however, it was quickly apparent that the narrow gothic arches “would only serve further to block entrance to the campus, not even pedestrians could use the side entries with comfort. A less practical use had to be found for this cherished memento.” Thus, by 1907 plans were underway to secure these ornamental stones from the Old College Building for the construction of a well house at the site of the campus cistern. The Rose Well House, a memorial to the Class of 1875, was completed for graduation on June 2, 1908.

In 1931, Newell Sanders (B.S. 1873, LL.B. 1931 and U.S. Senator from 1912-1913) again proposed a gateway to mark the Kirkwood entrance to campus in honor of the Class of 1873. The June 1931 Board of Trustees minutes record that the Board felt they were not in the position to consider the proposal until further development of the campus building program was determined, so that the design of the archway could conform to the architecture of the buildings on either side. Nonetheless, Sanders persisted, sending President Bryan a proposed set of drawings in September. 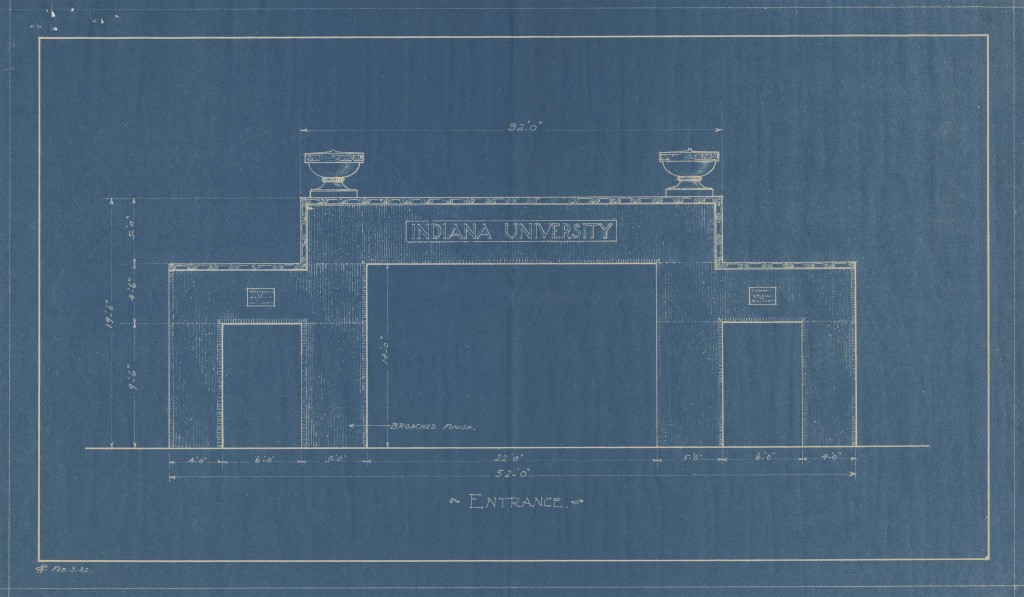 In February of the following year the Trustees minutes reported:

Senator Newell Sanders, of Chattanooga, Tennessee, presented a sketch of a gate or arch which he proposed to present to the University to be placed at the Kirkwood avenue entrance of the campus. Senator Sanders also showed a number of photographs of memorial gates and arches in various parts of this and other countries. It was suggested that the decision in regard to Senator Sander’s plan be deferred until a later session of the Board. 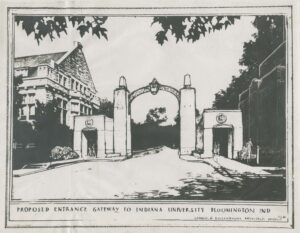 Despite concerns from university architects Robert Frost Daggett and Granger & Bollenbacher (who submitted the plan shown here in an effort to sway Sanders from his heavy lintel design), the Trustees, and President Bryan himself for a design coherent with the surrounding English Gothic style buildings, Sanders continued to present the Board with several only slightly revised versions of his original proposal, including one in which he collaborated on the design with the Indiana Limestone Company.

Granger & Bollenbacher and the W.P.A

As noted above in 1932, long-trusted architects to the university Granger & Bollenbacher – who oversaw the massive building campaign of the 1920s and 1930s – proposed four alternative designs more in keeping with the surrounding architectural styles of the campus. As outlined in the correspondence in the exhibit, in collaboration with some of the Trustees they settled upon design number 2, as the scale was not 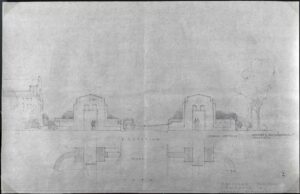 “over-powering and relates better than the more massive designs to the campus surroundings…will not screen the campus so much…” and …”relates architecturally with present and probable future buildings and yet has distinct character denoting a memorial.”

Ultimately, because a consensus could not be found relating to the design of the gateway, Sanders withdrew his proposal. 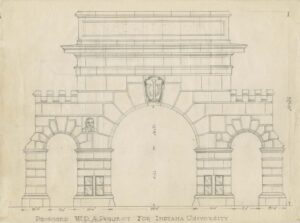 Only three years later the prospect again resurfaced when Theodore Skinner from the Indiana Works Progress Administration made the suggestion of President Bryan that federal funds might be available for the completion of the project. It seems the proposal was short lived, as correspondence only exists from early in the fall of 1935. The proposal sketch shown here was probably completed by a local “stone man” which President Bryan refers to in a letter to architect Alfred Granger.

By 1961, plans were again underway by university architects Eggers and Higgins for the construction of a “Fifth Street Gateway” which included closing the road that then ran through campus and replacing it with a grassy mall. Additional considerations called for a pull-off from Fifth Street “for staff being delivered or picked up at the Administration Building and the Library [Bryan and Franklin Halls] by car and taxi since now this creates a traffic problem on Indiana Avenue.” Two of their proposals are shown here. 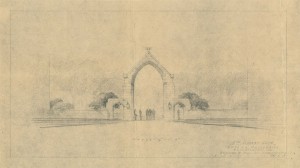 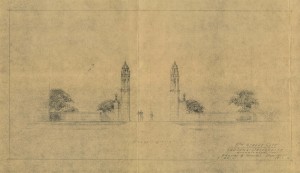 In June 1962 the Trustees approved a contract with the architects for the following:

for plans to close the traffic entrance to the campus at Kirkwood and Indiana Avenues. The existing street space will be changed to grass and walks, and traffic will terminate, west-bound, on the campus, at the Memorial Union Building. An unloading and turn-around area will be provided at Kirkwood and Indiana and a formal stone entrance structure will be built between the Administration Building and the Main Library.

With plans already underway for the celebration of Indiana University’s Sesquicentennial, in 1966 Benjamin H. Long (A.B. 1926) came forward with an interest in erecting a gateway in memory of his father and mother, Benjamin F. (Trustee from 1915-36) and Lucy Nichols Long who were both IU graduates. While as noted before Eggers and Higgins had already presented a Gothic design for the gates several years before, a 1967 report from the architects noted that “it is felt that a new approach to the design should be made.” The resulting design (shown here) took a dramatically more modern approach to the gateway, resulting, according the architects, from “a broad change in attitude toward the creation of structures in the romantic styles in use a few decades ago.” 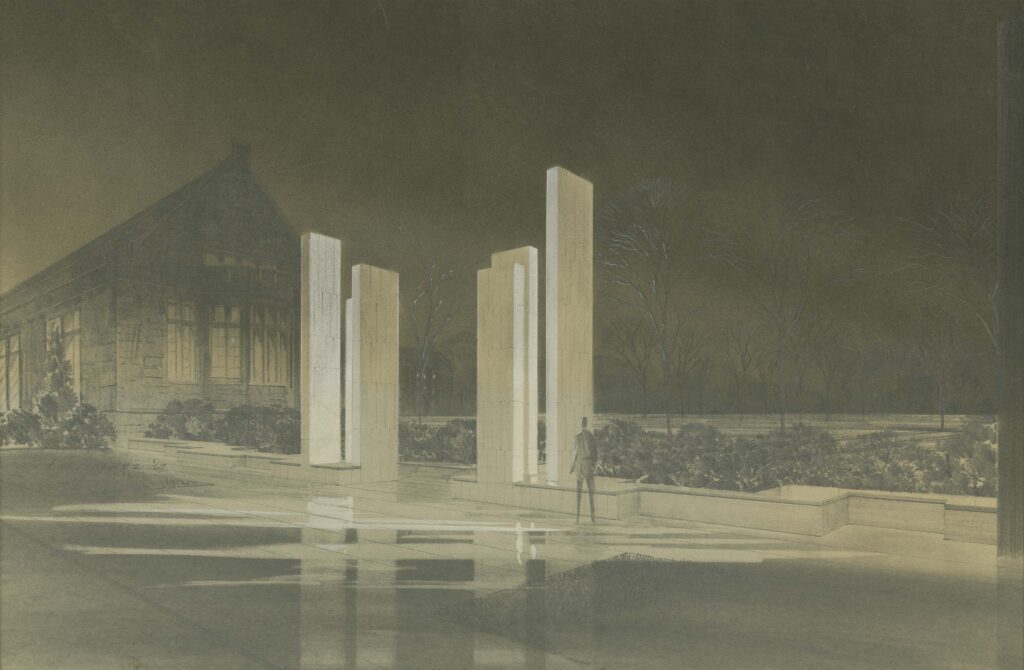 The drastic change in design drew criticism from the donor, the Trustees as well as Chancellor Wells. By 1968 they had settled upon a more traditional design. As recorded in a Memorandum of Personal Conversation with Chancellor Herman Wells, Benjamin Long stated:

I approved a design of a memorial gateway for the Kirkwood Avenue entrance to the campus, prepared a number of years ago…and favored by the board of trustees at the time. It is a Gothic design with a wall on either side, terminating in a Gothic archway, which abut(sic?) on pillars of Gothic design. The pillars will frame the entrance. The present roadway is to be closed and made into a mall.

The approved design (shown here) was the one that we know today. 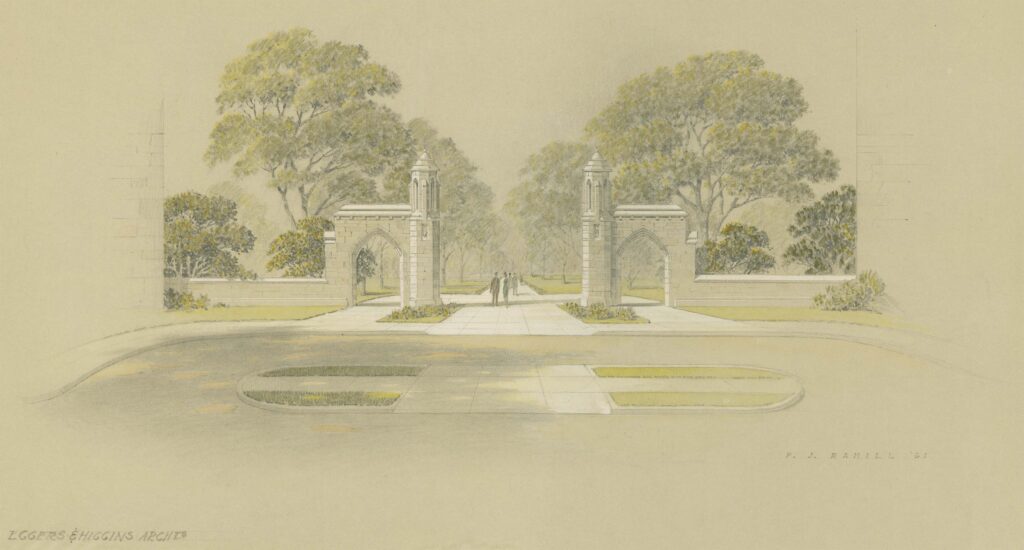 However, following the official announcement of Long’s gift in 1971 and with the beginning of construction imminent, in March 1972 opposition arose to what some students, staff and members of the community considered “wasteful alumni spending.”  Chancellor Wells wrote Long stating:

We are deeply distressed. We certainly would not have had this happen to you, but you are not unique…There was similar criticism of the Calder Stabile, criticism of the Showalter Fountain some years ago and any other attempts to beautify the campus. Had those who have gone before us been similarly selfish we would not have the beautiful campus we have today.

Despite support from university administration, two weeks later Long responded with a letter to then President John Ryan and Chancellor Wells:

It soon became clear to me that the gateway project could not proceed under these conditions…In my view such a memorial, in addition to having a quality of permanency, which the gates offered, could only satisfactorily be made in an atmosphere of harmony and good will…I am sorry the Sesquicentennial Gates will not be built. I believe they would have made a worthwhile contribution to the beauty of the campus; and that the beauty of the campus enriches the total educational experience the University affords…”

Edson Sample and the Sample Gates

Finally in the 1980s when the majority of the opposition to the proposal had quieted, long-time University director of scholarships and financial aid Edson Sample stepped forward to fund the Eggers and Higgins design of the early 1960s in honor of his parents, Louise Waite Sample and Kimsey Ownbey Sample Sr. The final completion of the Sample Gates coincided with a large plan for the west side of campus including the permanent closure of traffic from Indiana east through campus and the addition of landscaping, brick paving and benches in the area between the sun dial and Indiana Avenue. 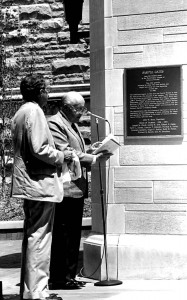 to eloquently evoke the symbolism of the new monument. Noting the new portal as a marker to the original entrance to campus, President John Ryan mused:

The grounds which all of us enter today through these gates are hallowed we think by an echo of the footsteps of thousands of members of the Indiana University community who came here throughout one hundred and two years, in their search for greater knowledge and understanding…The gates stand as a monument to those who have gone before us, to the work and vision of all who’ve helped to bring this university to greatness…

Vice President Kenneth Gros Louis went on to describe the monument as one not merely symbolic as an entrance to the campus, but: