It’s March, which means not only is spring just around the corner, but also that it’s Women’s History Month! In addition, this year marks the 40th anniversary of the establishment of the Indiana University Office for Women’s Affairs. In honor of both of these events, I’d like to highlight one of the archives’ collections – Indiana University Office for Women’s Affairs records, 1971-1985, bulk 1972-1980. But first, I would like to mention that there is a display in celebration of these events as well in the lobby of Wells Library. I collaborated on the display for an internship project and anyone who is interested should take a little time to check it out! 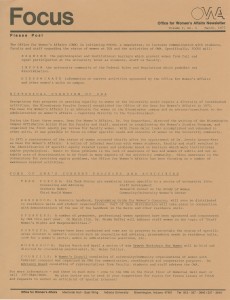 For anyone who’d like to conduct research on women’s issues or the OWA, or for those who are just curious, the aforementioned collection would be a great option to investigate. The collection covers the office’s early years and consists of five boxes made up of four series, some of which are divided into sub-series. The series are as follows: Reference files, 1964-1981; Focus newsletter, 1977-1979; Program development, 1971-1983; and Administrative subject files, 1975-1985. Pictured at right is the first Focus newsletter, just one of the finds within the collection. Copies of later newsletters are also available in the collection, and all of these are featured on the “Women’s Issues in the News at IU” poster in the library’s lobby. For more information on the contents of the collection, please feel free to take a look at the finding aid.

More information on women, women’s issues and the OWA can also be found in the archives’ reference files. Take advantage of Women’s History Month and come see what the archives have to offer!