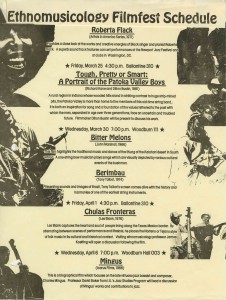 The Ethnomusicology Students Association collection finding aid is now available, and the materials depict a very active student organization throughout the 1980s and early 1990s. The ESA was established in 1978 to provide IU students interested in ethnomusicology with a place to share their common interests, and they quickly set to work planning the usual kinds of social events, lectures and workshops often offered by student groups.

But they didn’t stop there. They became involved in the The Archives of Traditional Music Noon Concert Series, and they began hosting an ethnomusicology film festival in 1983 that ran until at least 1991. The first “Filmfest” schedule featured films like Roberta Flack (1971) and Chulas Fronteras (1976). 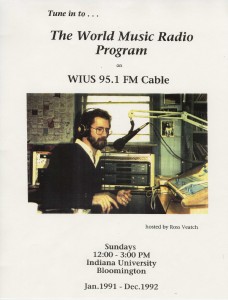 They also supported “The World Music Radio Program” on WIUS, which later moved to Bloomington’s community radio station, WFHB.  The earliest mention of the radio program is on a 1991 advertisement to “tune in” with host Ross Veatch.

However, the ESA wasn’t all work and no play. In the back of the Minutes/correspondence folder from 1985-1986, I found a copy of “The Folklore Shuffle,” a light-hearted take on the 1985 Chicago Bears football team’s “The Super Bowl Shuffle.”

Dated April 1986, the folklore version of the rap appears to have been written on the occasion of W. Edson Richmond’s retirement from his position as professor of English and folklore. A number of folklore faculty members had a verse, including now Associate Vice Provost for the Arts Ruth Stone and Associate Professor Emeritus of Folklore John Johnson. The chorus follows, but if you’re prepared to let the entire folklore shuffle blow your mind, please click the image. 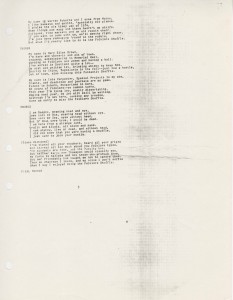 As always, if you have any questions or would like to see the collection, contact the Archives!