Despite what the calendar says, the Bloomington summer is FINALLY upon us, and along with this comes the traditional summer fare of ballpark hotdogs, corn on the cob, and oh yes, all those frozen treats. Nothing says summer to me quite like wandering by The Chocolate Moose after dinner on a warm summer night… While “The Moose” happens to be my favorite Bloomington ice cream destination, I recently learned a whole lot about the history of IU’s tasty variety as a result of a young patron. 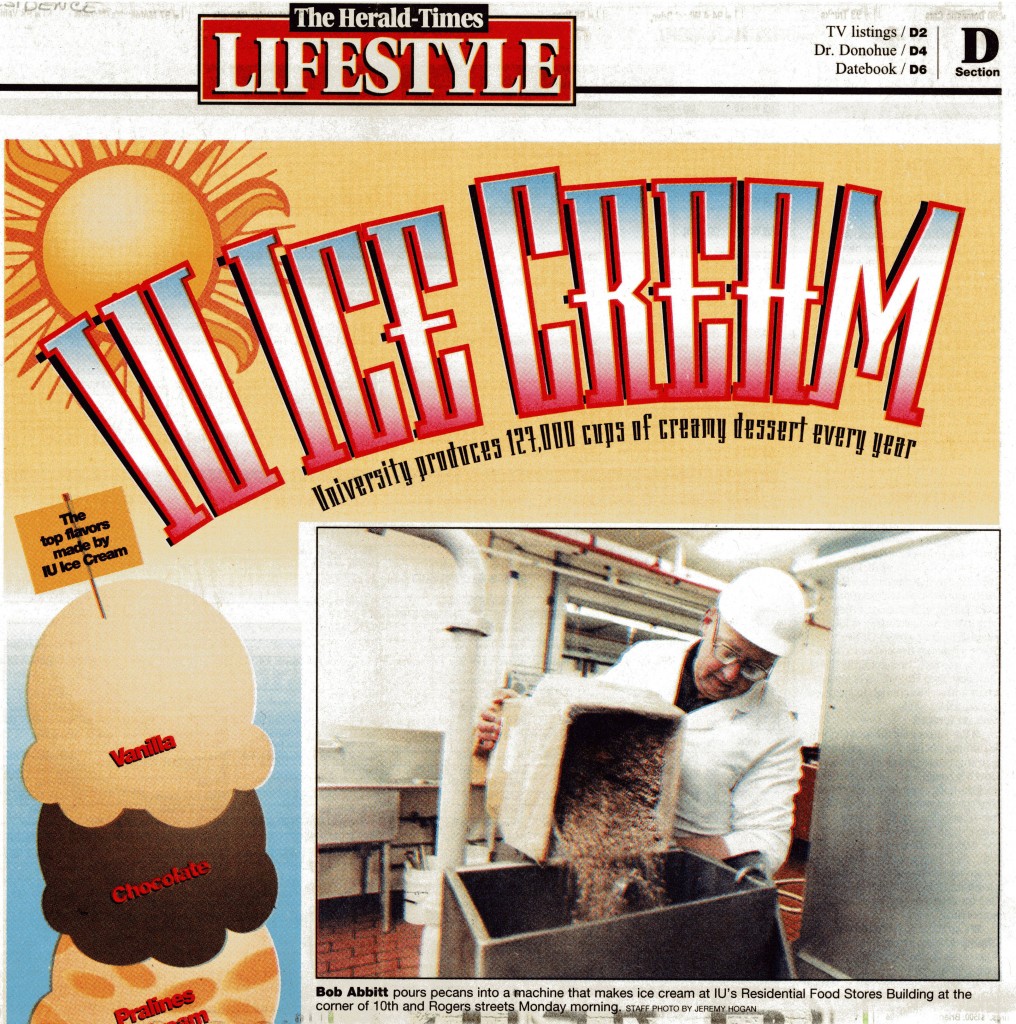 You might be wondering: When did IU start making it’s own ice cream? And do they still do it? What flavors did they make and how much did they produce? Were there artificial additives? How was it manufactured and who was involved? 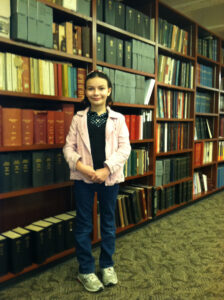 Early this winter I sat down with a young scholar who was curious about these same questions for a class project which focused upon ice cream as an “influential” dessert. We both certainly learned a LOT about our favorite tasty treat along the way. When finished with her project, Thalia sent me an email to tell me that “many people were interested in the information that I shared on IU’s line of ice cream. It pulled the presentation together by making such a global topic local.”

While the first year of production remains unclear, it is known that in 1931, the IU Board of Trustees awarded the ice cream contract for the University Halls and Commons to the Johnson Creamery Company on the grounds of their competitive prices as well as well as their “splendid service.” By 1937, however, correspondence and reports show that IU employee Clare Cavin in the IU Stores department was then producing approximately 50 gallons of ice cream per day from a purchased ice cream mix to be served in the dorm cafeterias. Thus, campus production began sometime in the mid-1930s. Over the coming decades, production swelled to sometimes over 200 gallons per day with the number of available flavors by some accounts reaching 80 including unique  examples such as Irish mocha, walnut rum raisin, deep dish apple pie, creme de menthe, blackberry cordial, strawberry fromage, coconut fudge, red-hot vanilla, carnival candy and pink champagne to the more traditional chocolate, vanilla and strawberry varieties. 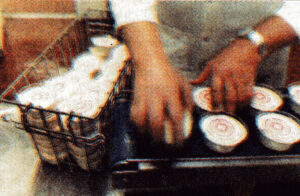 For the 1981-1982 year, this equated to 1,383,876 individual servings of ice cream either in the form of ice cream or frozen yogurt cups, nutty buddies, vanilla ice milk cups or frozen strawberry pies. The IU Seal (shown here) was imprinted on the lid of each of these servings!

At a production facility located on the corner of 10th and Rogers Street, for decades production began with long-time IU employee Don Spriggs (IU’s Master ice cream maker) and a mix consisting of milk, cream, stabilizers and 10 percent 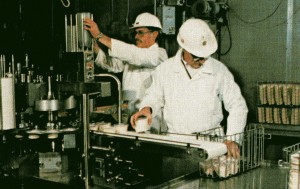 butterfat from Bloomington’s Johnson’s Creamery and later, Maplehurst Dairy in Indianapolis. The ice cream was then pumped through a freezer and when only partially frozen natural flavorings such as fresh fruits, nuts, candies, and even chocolate flavoring specially ordered from Wisconsin were added.

Partially resulting from the rise of ice cream chains such as Häagen-Dazs and Ben and Jerry’s and the changing dining habits of the student population, by 1998 ice cream production demand had fallen to under 200 gallons per week and the IU Food Services department made the tough decision to cease production permenantly. Don Spriggs and his then assistant Tim Stout produced their last 100 gallons of ice cream in December of 1998.

If you’re dying for some university produced ice cream, you can take a road trip to the University of Wisconsin – Madison which has been producing its own ice cream since the 1920s.

To learn more about the history of ice cream production at IU, as well as specifics on what was served in the dorm cafeterias, contact the IU Archives!