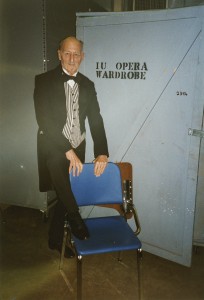 Today, I came to an alarming realization – I have been working on the papers of Professor Emeritus Henry H. H. Remak (1916-2009) for almost exactly a year!  During that time I truly feel that I have come to know this professor-extraordinaire, a man who spent almost sixty years at Indiana University teaching, administering, and being a delightful friend and mentor to those who knew him.  The most recent update I have to offer you – in this, my 9th, processing blog about the Remak collection – is that the teaching files have been arranged!  Contained within this 12-box series are the course materials from over 60 courses that Remak taught at IU in the Departments of Germanic Studies, West European Studies, Comparative Literature, and Honors.  This series also contains correspondence between Remak and many of his former students, as well as student papers and autobiographies.  In addition, there are files on several of Remak’s visiting professorships, including the Fulbright Award he received in 1962, which enabled him to conduct a course on Faust at the University of Lille in France. 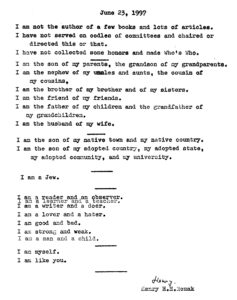 Through my blog posts over this past year, I have attempted to highlight some of the most fascinating, interesting, even touching aspects of this man’s life and work as viewed through his personal and professional papers. In doing so, I have often focused on Remak’s remarkable talents as a teacher, but for this post I’d like to focus on something a bit different and share with you two lesser known facts about Professor Remak.  The first is that Remak was a poet, not just at heart but in practice.  He would often author short compositions to honor a colleague’s accomplishments or in the event of a retirement or death.  Included in the collection here at the IU Archives are poems written to colleagues Dan Zaffarano, Charles Jelavich, and Paul Gebhard.  Remak even attempted to have one of his poems published – a lament written in 1965 for politician Adlai Stevenson.

The second lesser known fact is that Remak took great pleasure in yet another creative endeavor – acting.  During his tenure at IU, he appeared in a total of seven IU operas, the last of these being the 1997 IU Opera & Ballet Theater’s production of La Traviata.  From Vice Chancellor and Dean of Faculties and Director of the Institute for Advanced Study to the ever-humble “Servant Henry,” Remak was absolutely delighted to join the cast.  Did “Servant Henry” sing, you might be wondering?  Unfortunately, no – a decision, which Henry jokingly assesses as: “‘very narrow-minded of them.'”  When asked about his experience during an interview for the Indiana Alumni Magazine, Professor Remak reflects:

Contained within the collection are clippings about the opera, programs, rehearsal schedules, photos, and detailed descriptions of “Servant Henry’s” duties.  In a mischievous caption added to his “Rehearsal Schedule for Supernumeraries,” he underlines the term supernumeraries (i.e. extras) and writes: “that means: way above any other opera participants.”  At the bottom of the page, in his characteristically witty fashion, he adds:

Puschi – PLEASE tell the Press and TV  as well as Radio that I will not give any interviews about my skyrocketing career because I am a pure artist working for the good of the cause, not for  fame. – Henri Remac (please note my real – my artistic – name).

From browsing these files, it is apparent that Professor Remak – or Henri Remac, if you will – put forth as much care and devotion into performing as an extra in the opera or composing a few lines for a friend, as he did into his professional activities.  Perceiving Henry Remak as an aspiring actor and poet, as well as a teacher and scholar adds yet another layer of enjoyment to this rich and multifaceted collection.  Please do not hesitate to contact us at the IU Archives if you are interested in learning more about the Remak collection.