A finding aid is now available for the William W. Spencer papers, which offer a glimpse into the work of a nineteenth century student and his impressive career following graduation. 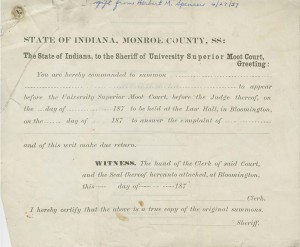 Spencer was born October 7, 1851, in Indiana, and he attended the University in the early 1870s, receiving his B.S. in 1875. He went on to study in the Department of Law where he participated in the University Circuit Moot Court, a required activity for students in the department at the time.

Among the moot court papers in the collection are several trial records. A couple of records dated April Term 1876 pertain to a widow’s suit for damages from a railroad company after her husband died in a train accident while traveling through Buffalo, New York. Another record dated February Term 1877 simply states that the case lacks sufficient facts and is followed by pencil-written notes. 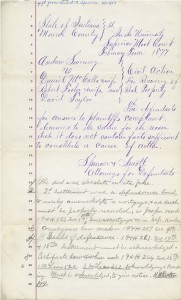 Following his graduation in 1877, Spencer moved to Marion County, Indiana, where he began his political career.

According to Rebecca A. Shepherd’s A Biographical Directory of the Indiana General Assembly, he was active in the Marion County Democratic Central Committee from 1881-1892, serving as both the secretary and later as the chairman. In both 1904 and 1908, he was chosen as a delegate to the Democratic National Convention.

He was then elected member of the Indiana House of Representatives from Marion County in 1911 and served until 1914, participating as chairman of the Ways and Means Committee. 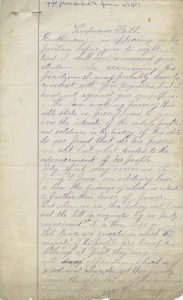 An undated essay titled "Temperance Bill" begins, "Gentleman; in appearing in this position before you tonight, I trust I shall command your attention."

Some of his writings appear to date from his time in the legislature, such as an address on the Temperance Bill, while others are short essays on various topics, including the teaching profession and the electoral college.

After his time in the General Assembly, he served as a commissioner on the state Board of Elections from 1918-1938. He died December 9, 1938 in Indianapolis.

To learn more about William W. Spencer and his time as a law student, please contact the Archives!