IU Hoosiers at the Olympics!

From July 27 to August 12, thousands of athletes from over two-hundred countries will strive for gold at the 2012 Summer Olympics in London.  Among them, there will be Hoosiers, continuing a long line of 173 Olympians from Indiana University who have collectively won 49 gold, 16 silver and 21 bronze medals (IU Hoosiers).  These 173 Hoosiers have represented 15 countries, including the United States, and competed in 19 different sports. Among IU’s most memorable Olympic accomplishments include Mark Spitz’s astonishing 7 gold medal win at the 1972 Munich Olympics and Bob Knight’s role as head coach for the gold-medal-winning 1984 U. S. Men’s Basketball Team, which included IU Hoosier Steve Alford.

IU’s Olympic tradition has been so strong, in fact, that the familiar term “Hoosier Nation” has taken on a new meaning – an Indiana Daily Student reporter said of the 1968 Olympics that the seven gold medals won that year by IU Hoosiers “would rank IU 11th among the nations of the world.” Not only that, but the “14 medals possessed by Hoosier athletes” in 1968 “[made] a total surpassed by only 16 nations.”  In addition to holding its own as a “nation,” in 1964 IU “[produced] more Olympic athletes than any other school in the United States” (Indiana Alumni Magazine).  Another impressive statistic is that IU athletes have competed at every summer Olympics since 1932, apart from the 1980 Games in Moscow, which saw the U. S. government’s controversial protest against the Soviet Union’s involvement in Afghanistan.  Over the years, Hoosiers have been especially strong at swimming and diving, but it is IU’s track and field competitors who started it all and who will be the focus of this post. 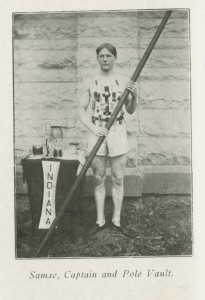 In 1904 Leroy Samse and Thad Shidelar began IU’s tradition of Olympic formidability by bringing home silver medals in the pole vault and 110 high hurdles, respectively.  Following a hiatus that spanned nearly three decades and six Olympic games, IU returned to Olympic competition in Los Angeles in 1932 with two more track and field representatives – Ivan Fuqua and Charles Hornbostel.  Hornbostel finished sixth in the 800-meter run, while Fuqua set a world record in the 1600-meter relay as the squad’s lead-off man, becoming the first IU Hoosier to win Olympic gold.  The success of these two men has been attributed, in part, to IU-Bloomington’s head track coach at the time, Earl C. “Billy” Hayes. 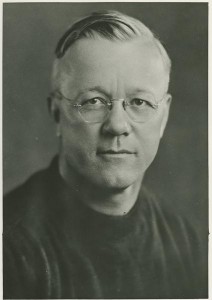 Hayes, who was inducted into the USA Track and Field Hall of Fame in 1976, served as head track coach for the Bloomington campus from 1924 until his death in 1943 and was known for raising IU’s Track and Field program from the dust to a first-rate championship team worthy of national and international acclaim.  Under Hayes’ leadership, the IU Track and Field team won three NCAA team titles, the national collegiate outdoor team title, and eight Big Ten conference titles.  Not surprisingly then, “Billy” Hayes was selected as assistant track coach for the U. S. Men’s Team in the 1936 Berlin Games.  He took with him three of his own – Charles Hornbostel for his second Olympics, Tommy Deckard, and Donald “Don” R. Lash.

Of these three, Don Lash – who was himself an eventual Hall of Famer – is undoubtedly the best known.  Lash was a talented long distance runner who won twelve national titles during his career, including seven consecutive national cross country championships.  Additionally, in 1936 Lash broke a world record in the 2-mile race.  Though Lash competed in the 1936 Olympics – finishing thirteenth in the 5,000-meter and eighth in the 10,000-meter – he did not bring home a medal.  Lash had high hopes to come back and redeem himself in 1940, but due to the onset of World War II, he never had the chance.  Despite this, Lash’s experience in the 1936 Olympics had a life-changing impact on him.  In a 1992 interview, Lash recalls:

In 1936 when I was on the Olympic team we went to Berlin and Adolph Hitler sat right behind the American stand and I saw him almost every day.  I saw those people rise when he would come into the stadium and they were just like stiff pokers with their hands out saluting him.  I realized that he was more like a God to them than a leader of a country.  When I got back and realized what he was really trying to do, I got into the FBI. . . I knew that we didn’t want Nazism and so I was very devoted in my work.  I was sincere. 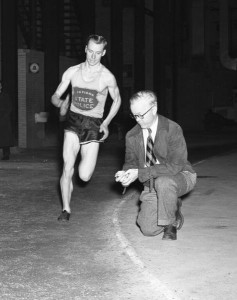 The image that Lash so vividly relates was a startling harbinger of the war to come.  As a result of World War II, the 1940 and 1944 Olympics were cancelled.  However, 1948 was an exciting year for IU Track and Field Olympians.  Not only did Roy Cochran take home two gold medals from the 1948 London Olympics – one in the 400-meter hurdles and the other in the 1,600-meter relay – but he became the first person from IU to win an individual gold medal.

Cochran, who was yet another one of Hayes’ stars, struck fame not only by winning gold, but by being singled out by King George VI during a cocktail party at Buckingham Palace.  The Indiana Alumni Magazine (September 1948) relayed the following, which originally appeared in the syndicated column of Vincent X. Flaherty:

For some reason, the King singled out Roy Cochran, America’s 400-meter hurdles Olympic champion . . . Roy, a real guy, who is extremely intelligent and versed, kept the conversation kicking 15 minutes with the King.  The two sat off in one corner of the big room all by themselves.  Other members of the party wondered why the King devoted so much time to one individual . . . “He’s one of the swellest guys I ever met,” said Cochran thoroughly enthralled.  “And do you know something else?” said Cochran.  “It took a real King to make me taste my first drink of liquor.  He didn’t make me, of course.  I just sort of felt it wouldn’t be right if I didn’t.” 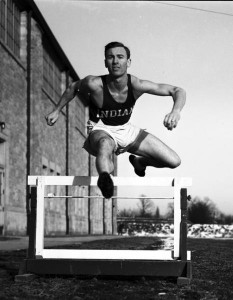 While it was difficult to compete with Cochran’s individual gold medal win, not to mention his media-worthy encounter with the King of England, Fred Wilt was another one of IU’s outstanding long-distance runners who also competed that year and finished 11th in the 10,000-meter run.  Wilt returned to Helsinki in 1952, finishing twenty-first in the 10,000-meter.  He would be the last of Hayes’ men to compete at the Olympics, essentially marking the end of an era.

The Legacy Continues:  Highlights From 1952 to the Present

Since the end of the Hayes’ era, IU has continued to send exemplary Track and Field competitors to the Olympics.  The following list offers some highlights: 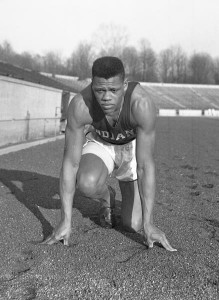 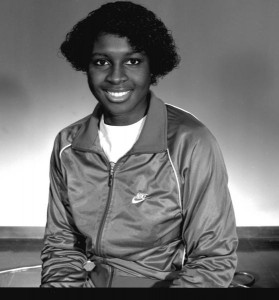 It’s been over a century since Leroy Samse and Thad Shidelar began IU’s Olympic legacy.  Since then, IU has excelled not only in Track and Field but in a wide variety of events from swimming and basketball to fencing and diving.  Undoubtedly, the upcoming 2012 Summer Olympics will be no different.  This summer IU high jumper Derek Drouin will join the Canadian Olympic Team, while IU swimmers Dorina Szekeres, Nicholas Schwab, Marguax Farrell and Kate Fesenko will represent their native countries of Hungary, the Dominican Republic, France and Ukraine, respectively.  Additionally, diver and IU alumnus Christina Loukas has earned a spot on the U. S. Olympic Team.  We wish them all the very best of luck !

If you are interested in learning more about IU’s rich Olympic history, please contact the IU Archives.